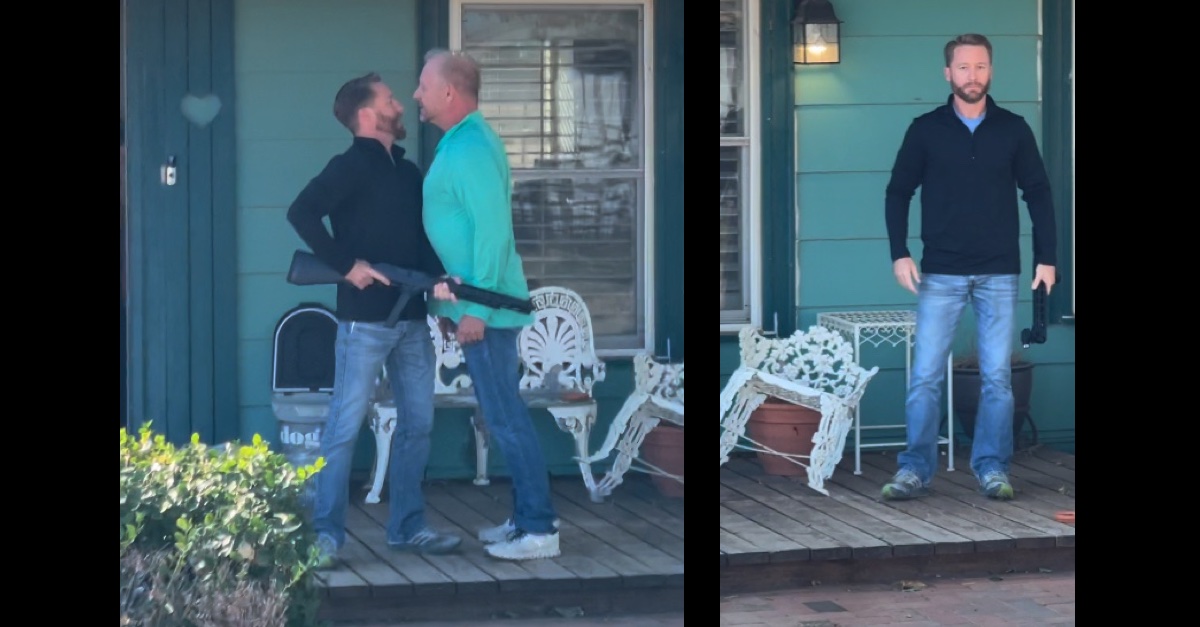 The Texas man facing multiple wrongful death lawsuits after he was seen on video shooting his girlfriend’s ex-husband after a fight on his porch is asking a judge to move the cases to a different county, claiming he cannot get a fair trial where the cases are currently filed.

Kyle Carruth, who killed Chad Read during what appears to have been a custody dispute on Nov. 5, has asked that lawsuits brought in December by Chad Read’s widow, Jennifer Read, and mother, Jinx Read, be consolidated and transferred, according to reports. He has also asked to pause the cases pending an ongoing criminal investigation, reports say.

H. Grady Terrill, an attorney for Carruth, said in a response to both lawsuits that Carruth had no choice but to use deadly force “to defend himself, his property and others, which caused the death of Chad Read,” according to a report by the Lubbock Avalanche-Journal.

The video appears to show Carruth, the boyfriend of Chad’s ex-wife Christina Read, shooting Chad Read during a custody dispute. Chad and Christina are seen and heard arguing on the porch of Carruth’s house and home office over when Chad would take custody of their son. Carruth is seen leaving the argument and then emerging from the house with a large gun. Chad Read threatens to take the gun and “use it” on Carruth, who then fires a shot into the porch near Chad’s feet. Chad then grabs the gun and uses it as leverage to push Carruth away from him. Carruth, who by then is off the porch with the gun in his hands, turns back and fires two shots at Chad.

“From the outset, Carruth would show that his actions and/or omissions … were within the bounds of the law and necessary and reasonable ‘self-defense’ as such term is defined and applied in the State of Texas,” Terrill wrote, according to a report by local CBS affiliate KLBK.

“Nonetheless a stay of this proceeding is necessary until the resolution of any possible criminal prosecution of Carruth,” Terrill wrote, according to KLBK.

Terrill has also asked for the cases to be consolidated and suspended until the office of Texas Attorney General Ken Paxton (R) has completed its criminal investigation, the Avalanche-Journal reported.

Paxton’s office is investigating the case after the Lubbock County District Attorney’s office recused itself due to the fact that Carruth’s ex-wife, Ann-Marie Carruth, is an elected judge in the district where the cases are filed.

Terrill argued that the fact that the civil and criminal cases arise from the same incident could lead to a violation of Carruth’s Fifth Amendment right against self-incrimination, the Avalanche-Journal reported.

“Because the two cases arise from the same alleged facts, Carruth faces the unenviable prospect that every statement he makes in this civil proceeding could be used against him in the criminal case,” Terrill’s motion says, according to the Avalanche-Journal.

Terrill has requested that the cases be moved to district courts in either Smith, Harris, or Cherokee counties, the report said.

Terrill argues in the filing that Carruth cannot get a fair trial in Lubbock, due to a combination of publicity and, allegedly, a coordinated attempt to influence opinion against Carruth.

According to KLBK, a portion of Terrill’s filing says: