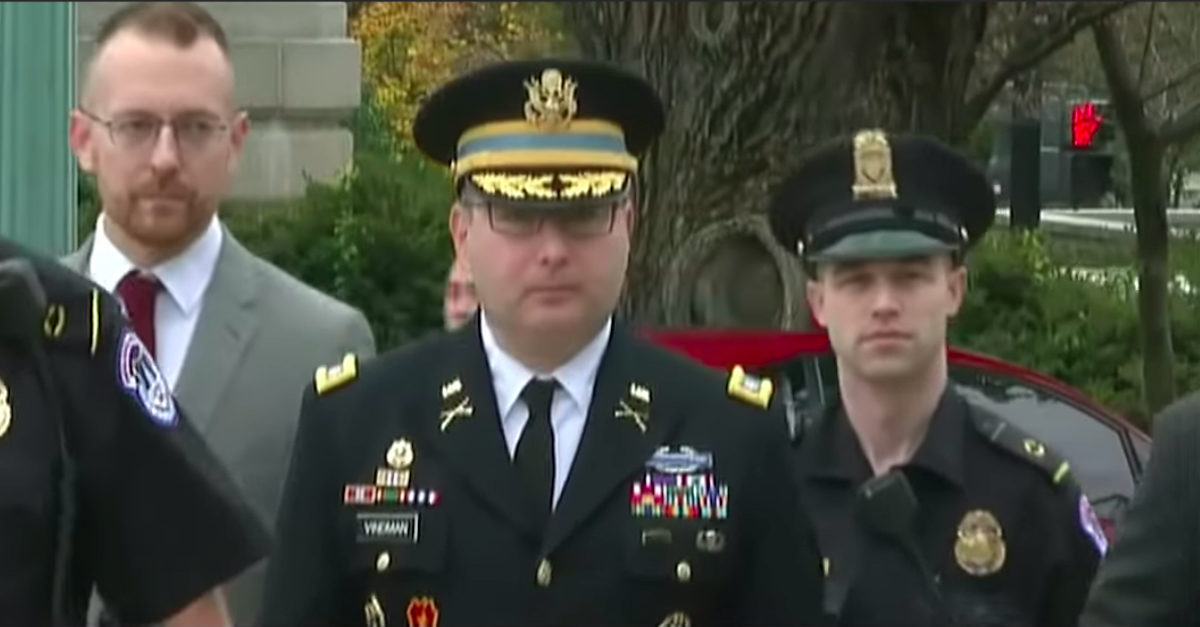 Update, Nov. 18: Kash Patel is suing over the Politico story.

During his testimony before impeachment investigators in the House of Representatives Tuesday, the top Ukraine expert on the National Security Council (NSC) said one of House Intelligence Committee Ranking Member Rep. Devin Nunes’s (R-Calif.) past key aides “misrepresented” himself to President Donald Trump in order to affect Ukraine policy, according to a Wednesday Politico report.

According to two people familiar with the closed-door interview, Lt. Col. Alexander Vindman testified that upon returning from the inauguration of President Volodymyr Zelensky in May, he was scheduled to debrief President Trump on the promising start to the new Ukrainian president’s term.

“The U.S. government policy community’s view is that the election of Zelensky and the promise of reforms to eliminate corruption will lock in Ukraine’s Western-leaning trajectory, and allow Ukraine to realize its dream of a vibrant democracy and economic prosperity,” Vindman said in his opening statement.

However, “at the last second,” Vindman’s debriefing of Trump was cancelled, he reportedly told lawmakers Tuesday. According to accounts of the testimony, Vindman was told by NSC senior director for European and Russian affairs Dr. Fiona Hill that his positive outlook on U.S.-Ukraine relations might confuse the president because it would contradict what he had been told by Kashyap “Kash” Patel. Hill previously testified that Trump had been led to believe that Patel, not Vindman, was actually the NSC’s top Ukraine expert.

According to the report, Vindman also said that Patel had been intentionally bypassing NSC protocol in order convince Trump that the Ukrainian government was a hotbed of corruption, feeding him materials that reaffirmed his belief the country interfered in the 2016 election.

Patel, a former counterterrorism prosecutor in the Justice Department’s National Security Division and senior aide to Nunes, had joined the the National Security Council staff in February with no apparent experience in Ukraine or Ukrainian politics.

Prior to joining the administration, Patel was lionized by conservatives for authoring the infamous 2018 “Nunes Memo,” which alleged that the FBI intentionally misled a FISA court judge regarding the origins of the “Steele Dossier” in an effort to unlawfully surveil the Trump campaign and help Hillary Clinton win the 2016 presidential election.

The memo was roundly mocked by legal professionals and law enforcement officers. Even Trump’s hand-picked FBI director Christopher Wray issued a statement saying the bureau had “grave concerns about material omissions of fact that fundamentally impact the memo’s accuracy.”