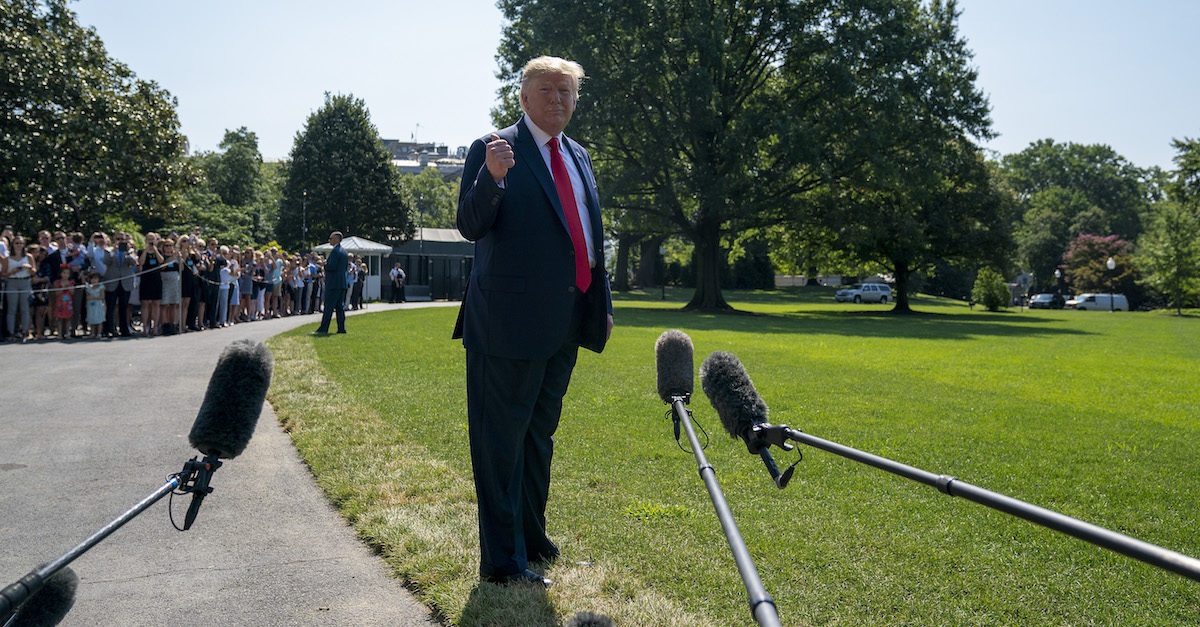 WASHINGTON, DC – AUGUST 09: President Donald Trump speaks to members of the press before departing from the White House on the south lawn before he boards Marine One on August 09, 2019 in Washington, DC. Donald Trump spoke to reporters about gun background checks and the escalation of the US-China trade war.

“For all of the Fake News Reporters that don’t have a clue as to what the law is relative to Presidential powers, China, etc., try looking at the Emergency Economic Powers Act of 1977. Case closed!,” Trump tweeted late Friday night.

While it’s not entire clear what the President’s initial “order” entailed, a number of legal and international affairs experts pointed out that under the IEEPA, Trump words have no legal authority unless he first decides to declare that trade with China constitutes national emergency – a move that would have a significant effect on the U.S. economy.

Trump’s initial tweets on the topic were fired off Friday morning; he railed, as he often does, against China for taking advantage of America’s trade policies.

“Our Country has lost, stupidly, Trillions of Dollars with China over many years. They have stolen our Intellectual Property at a rate of Hundreds of Billions of Dollars a year, & they want to continue. I won’t let that happen! We don’t need China and, frankly, would be far better off without them. The vast amounts of money made and stolen by China from the United States, year after year, for decades, will and must STOP,” Trump tweeted.

He then demanded that privately owned U.S. companies begin searching for economic alternatives to China.

“Our great American companies are hereby ordered to immediately start looking for an alternative to China, including bringing your companies HOME and making your products in the USA. I will be responding to China’s Tariffs this afternoon. This is a GREAT opportunity for the United States,” he wrote.

While his original “hereby” command provided quite a bit of comedic fodder for legal commentators, his invocation of the IEEPA in support of his order has raised red flags for experts worried that the President may not fully understand his own threat.

Former U.S. Attorney and current professor at the University of Alabama Law School Joyce White Vance responded to Trump by stating that the IEEPA does not allow the President to do what he appears to think it does; she warned about the long-term ramifications of what may happen if the Act is invoked.

“IEEPA doesn’t work the way he thinks it does. But that’s not much of a surprise. Trump is increasingly dangerous-creating situations that cannot be readily fixed down the road, and he clearly doesn’t care what happens in the long run,” she wrote.

Professor Steve Vladeck of the University of Texas Law School had a more foreboding take on Trump’s tweet, implying that Trump may have the authority to follow through on his threat to American companies, but lamenting that Congress never foresaw a President wielding the office’s emergency powers in such a reckless fashion.

“One of the enduring phenomena of the Trump era is going to be the list of statutes that give far too much power to the President, but that many didn’t used to worry about—assuming there‘d be political safeguards. Today’s entrant: The International Emergency Economic Powers Act,” Vladeck tweeted.

Vladeck’s sentiment was echoed by Harvard Law professor Jack Goldsmith, who placed the blame squarely on Congress for enacting a statute giving the President such broad and unchecked authority.

“Alas, [Trump] is right about IEEPA, which is an extraordinarily broad and open-ended delegation from Congress to the president.  This is not about Article II power, at least not mainly. It is about the power Congress has given to the president,” Goldsmith tweeted, along with a link to the IEEPA statutory language.

“Read those astonishingly broad and all-encompassing words carefully and imagine what it might mean in Trump’s hands.  Pay attention especially to the word ‘any,’ which is used dozens of times in [the statute],” he wrote. “Note also that courts have tended to uphold even the broadest exercises of presidential power under IEEPA, since the delegation is so extensive, and since it operates in an area of the president’s overlapping Article II power.”

China, for its part, has responded as follows:

Spokesperson for China’s Commerce Ministry: “China strongly urges the US not to misjudge the situation or underestimate the determination of the Chinese people, and to immediately stop its wrongdoing… Otherwise the US will have to bear all the consequences it has caused.”