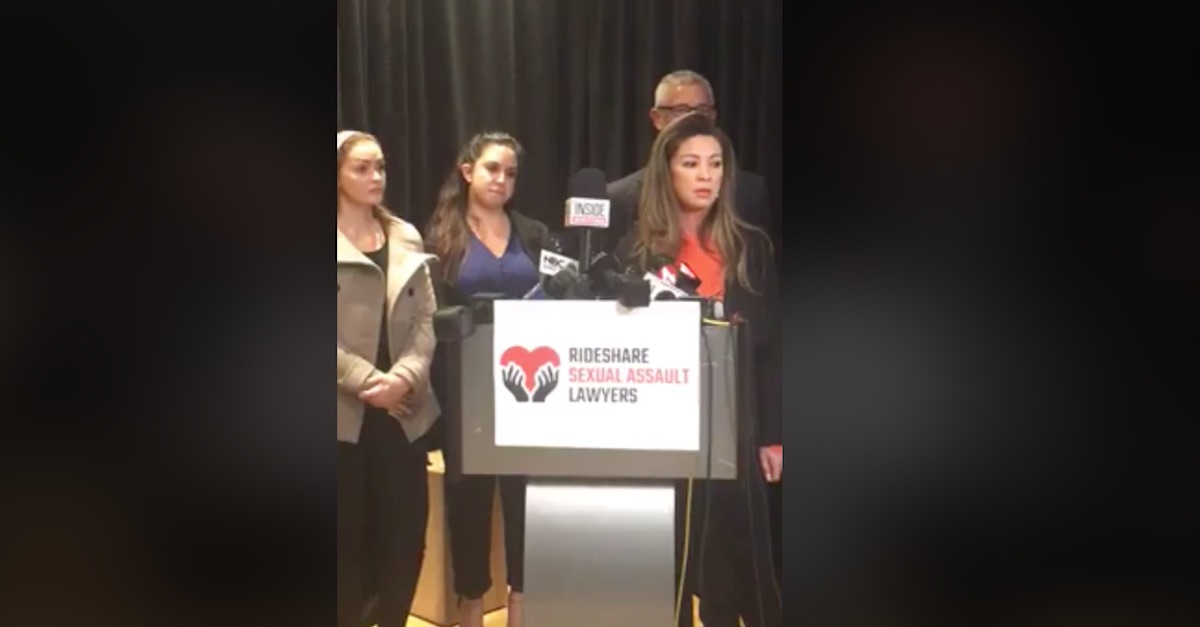 A mass tort complaint was filed against rideshare service Lyft on Tuesday, claiming that hundreds of victims were sexually assaulted and raped by drivers, and that Lyft was negligent and ignored complaints or didn’t respond adequately. On Wednesday, attorneys held a press conference, where multiple victims were present and named.

Attorneys with Estey Bomberger, LLP and Cutter Law P.C. filed the suit in the Superior Court of the State of California, County of San Francisco. 20 victims in total have been named, but the lawsuit also includes hundreds of Jane Roes (1-1000), and a John Roe. Brenda Charity, Ingrid Ferreira, Tykaja Hall, Caroline Miller, Erin Marshall, and Hannah Wells were among the women named.

The suit was filed against Lyft and 100 Does.

Allegations against the defendants include: awareness of rapes and sexual assaults by Lyft drivers as early as 2015 (“[Lyft et al.] has been fully aware of these continuing attacks by sexual predators”); “appallingly inadequate” response to the attacks:

The plaintiffs allege 14 causes of action, including but not limited to: general negligence, negligence in hiring, supervision and retention, intentional affliction of emotional distress, vicarious liability for sexual assault, failure to meet reasonable consumer expectations.

The lawsuit contains graphic descriptions of the alleged assaults, and in some cases, names the drivers accused of perpetrating these attacks (Joshua Kyam Quaid, Nabaz, David, Jose Gerardo Lopez, Chadwick Demon Foster, Ruben, David Carter, John Granillo, Lofti Ben Yedder, and so on). One of the accused, Rajabboy Juraey, the lawsuit said was driving on a suspended license and without a registration. They plaintiffs said an “adequate” background check would have shown this.

The plaintiffs claim that Lyft “has continued to let sexual predators drive and interact with vulnerable members of the public after they have received reports of sexual assaults by these predatory drivers. In many cases, LYFT has allowed sexual predators and assailants to continue driving after LYFT learned of the assaults committed by those drivers.” They further claim that Lyft “does not adequately investigate customer complaints of sexually inappropriate behavior or serious sexual assaults” and “does nothing to warn its female
passengers about this very serious and real danger.”

Estey & Bomberger said in a statement that eight of the 20 victims named “were victimized after Lyft was sued by another group of 14 victims on Sept. 4” in San Francisco.

“During the last three months, Lyft had ample opportunity to make changes to ensure the safety of female passengers,”
Mike Bomberger said in a statement obtained by Law&Crime. “But instead of protecting women, the company chose to invest in a costly public relations campaign with no regard to safety.” For more information, click here.

A Lyft spokesperson told Law&Crime in a statement that “What these women describe is something no one should ever have to endure”:

Everyone deserves the ability to move about the world safely, yet women still face disproportionate risks. We recognize these risks, which is why we are relentless in our work to build safety into every aspect of our work. That means continually investing in new features and policies to protect our riders and drivers.

This year, nearly one in five employees at Lyft have been dedicated to initiatives that strengthen the platform’s safety. In just the last few months, we’ve launched more than 15 new safety features — including daily continuous criminal background monitoring of all of our drivers, in-app emergency assistance to make reporting easier for riders, and mandatory feedback for rides rated less than four stars to ensure we are constantly tracking any level of problematic behavior by drivers. We’ve also partnered with RAINN, the nation’s largest anti-sexual violence organization, to roll out required sexual violence prevention education. Our work on safety is never done, and we will continue to invest in new features, protocols, and policies to ensure Lyft is the safest form of transportation for our riders and drivers.

Lyft has a 24/7 “Critical Response Line” for both customers and drivers who feel threatened, and it is company policy to cooperate with law enforcement.

Lawsuit Against Lyft by Law&Crime on Scribd