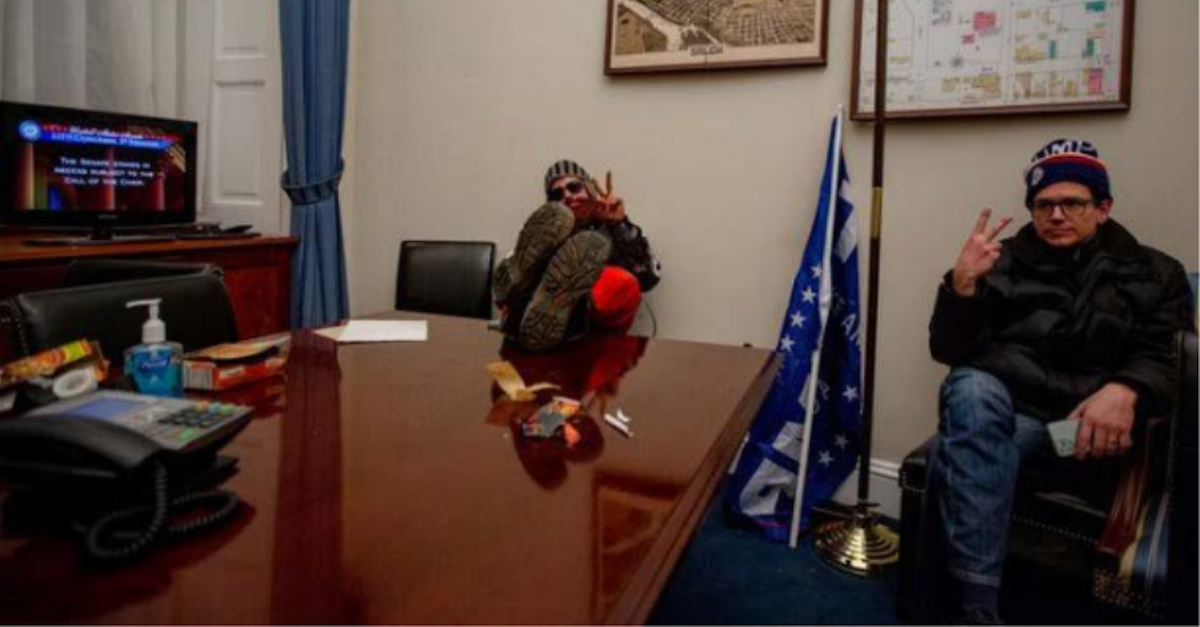 One of the many images of disrespect by U.S. Capitol insurrectionists shows two men inside a Congress member’s office flashing “V” signs: one kicking his feet on a desk with a “victory” sign and the other sitting distractedly with the same sign in reverse, an offensive gesture in some countries.

The second man, 39-year-old Justin McAuliffe, has been arrested and charged in court papers boasting of his invasion of the office space and putting that image on his Telegram account, an encrypted app that became popular with the radical right after traditional social media platforms banned them.

Slate, the online news magazine, ran the same image in an article titled “My Unhinged Three Hours Inside the Overthrown U.S. Capitol.”

McAuliffe’s Facebook chats with a person whose identity is redacted show him marveling at lax treatment by some Capitol police officers, some of whom were seen taking selfies with the rioters.

“Some people were smoking a joint in the room, lol,” McAuliffe is a quoted as saying. “Cops came in and weee [sic] like. Okay guys really? They didn’t even ask us to leave right away. They let us sit down and hang out and relax.”

There were several trespassers in elected officials’ offices that day. McAuliffe’s fellow rioter Richard “Bigo” Barnett was seen in a smirking photo kicking up his foot on House Speaker Nancy Pelosi’s desk with a stun gun stashed in his pants. Barnett bragged about having taken a piece of the Democratic leader’s mail to the press and received an almost-operatic dressing down by an indignant federal judge who summed him up as “Brazen. Entitled. Dangerous,” in a ruling keeping him behind bars before trial.

McAuliffe avoided such a heavy judgment, with a federal judge ordered his release before trial.

In another Facebook chat seen in court records, McAuliffe is asked about a woman said at the time to be in “critical condition and alive.”

“[N]o one here knows anything about it,” McAuliffe responded. “Only what the news is reporting.”

The conversation is not dated or time-stamped in court documents, and the woman is not named. But late Capitol insurrectionist Ashli Babbitt dominated the national conversation at the time for being shot dead, trying to break through the door of the Speaker’s Lobby separating the mob from the lawmakers.

Prosecutors attribute a breakthrough in their investigation into McAuliffe to a witness who “unfriended” him on Facebook, when the alleged rioter-in-the-making began posting compulsively about COVID-19 conspiracy theories. Those posts parroted former President Donald Trump’s rhetoric that the pandemic was a hoax, upsetting McAuliffe’s former friend whose family had contracted the virus, according to court papers.

This witness still occasionally checked in on what the erstwhile friend posted, however, and was alarmed.

Stepping forward four days after the siege on Jan. 10, the witness sent McAuliffe’s phone number to the FBI, which the bureau used to find his Telegram account with the allegedly incriminating image. The witness continued to send authorities additional images that McAuliffe posed on Facebook from the siege.

“You’re welcome,” McAuliffe allegedly wrote in a post, which shows a jarring juxtaposition of him “feeling blessed,” with a haloed emoji over images of the chaos. 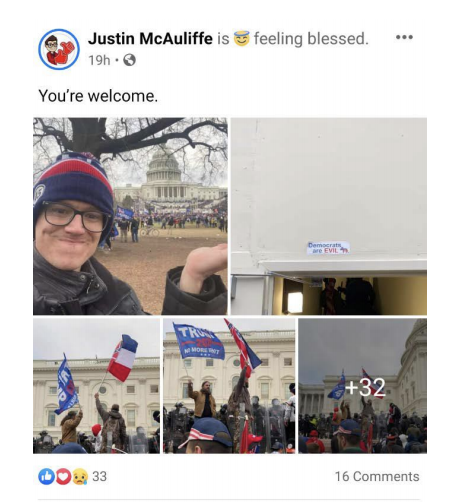 On Jan. 8, another witness sent the FBI a screenshot appearing to show that McAuliffe had access to Senate Wi-Fi, indicating that he was near Senate offices.

McAuliffe has been charged with remaining in a restricted building without authorization and trying to disrupt the orderly conduct of government business. He is expected to be presented this afternoon in the Eastern District of New York.

U.S. Magistrate Judge A. Kathleen Tomlinson granted McAuliffe’s released to his father’s custody, with travel restrictions, on a $50,000 bond. McAuliffe has a follow-up hearing scheduled for Feb. 18th at 1 p.m.  His attorney Randi Chavis, of the Long Island Federal Defenders office, declined comment. Assistant U.S. Attorney Andrew Grubin is prosecuting his case for the government.

Read the charges against McAuliffe below: