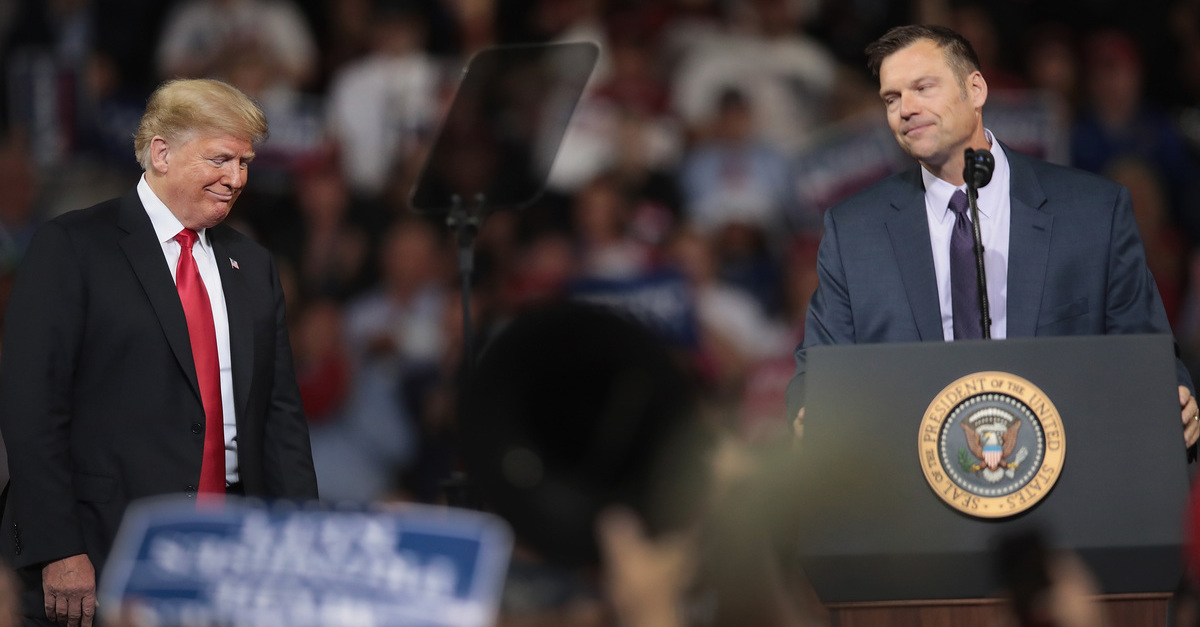 Kansas Republican Senate candidate Kris Kobach hired a white nationalist to file the paperwork that created the Kobach for Senate campaign as a limited liability company with the Kansas Secretary of State’s Office in August of this year.

According to the Kansas City Star, Joseph Suber was paid at least $500 by the GOP candidate for “field coordinating services” in September–per Kobach’s latest campaign finance report.

In June 2018, Suber responded to a post on The UNZ Review, a website that positions itself as “alternative media” but which regularly hosts racist, antisemitic and white nationalist content.

That post referred to children crossing the U.S.-Mexico border as “child-invaders.” In response, Suber wrote:

I am ready to sign up for the Kobach ethnostate defense force: Kansas, Kobach and Kids.

In another post on that site from August 2018, Suber derogatorily referred to part of Kansas as “Little Mexico.”

The Star notes that Suber also regularly posted antisemitic comments on the UNZ Review and extolled Kobach’s alleged virtuosity in appealing to regular Republicans and white nationalists like himself.

In another post that month, he praised Kobach’s ability to deliver traditional GOP talking points “without pooping on those of us who value the character of Heritage America” and said his only wish was that Kobach would deliver “some louder dog-whistles.”

Kobach said that Suber does not speak for him in a statement obtained by the outlet.

“Mr. Suber’s comments are abhorrent, and I am personally offended by them. As a Christian, I reject all forms of racism and anti-Semitism,” the GOP hopeful said.

“As soon as I became aware of Mr. Suber’s activities and his comments, the campaign severed all ties to him,” Drake said. Kris Kobach doesn’t share Mr. Suber’s views. I deeply regret that I didn’t look into Mr. Suber’s background before permitting him to do volunteer work for the campaign. However, it is very difficult to do a thorough background search of every recorded statement and every past activity by each volunteer in a campaign as large as this.”

Kobach has long been a lightning rod for controversy. He infamously led President Trump’s failed voter fraud panel. It was later revealed that Republican National Committee researchers didn’t think Kobach was a fit for the Trump Administration after flagging “white supremacy” as a potential vulnerability should he be hired.

The Yale Law graduate also left his prior job as Kansas Secretary of State in disgrace after being ordered to take six hours of continuing legal education classes by a federal judge due to his apparent lack of familiarity with the law.

The latest incident–hiring a white nationalist as a field organizer to set up the campaign’s incorporation documents–is only likely to further erode Kobach’s electoral chances in The Sunflower State.

Suber is also a former Kobach campaign donor. He contributed a total of $142 to Kobach’s failed 2018 gubernatorial bid.

Law&Crime dug up some additional posts by Suber.

In one antisemitic post, Suber promoted the “great replacement” conspiracy theory that Jewish elites were trying to replace white Americans with non-whites:

Is there data about Jewish self-identification among the Jew-hapas? In my anecdotal experience this is even more a case of Jew-when-convenient.

Regardless, if the attitudes and elite dominance have infected us all to the point that most of us “think jewish” then what is the timeframe for that to right-itself (pun intended)? Can it happen before we are overrun by the brown footsoldiers?

An extant Twitter post by Suber from August 1–one of just a handful of such posts–positions Kobach firmly in the Trump mold:

Kobach is the only one who sends a message to the establishment elites that cannot be ignored: Build the wall, Defend the Constitution.

In one UNZ Review post about Silicon Valley employees’ political affiliations, the former Kobach for Senate hire recommended violence as a way of dealing with the fact that tech industry donations largely benefit Democrats and the Green Party.

“The TRS guys did a deep dive on the leaked video,” Suber wrote--referencing a popular neo-Nazi website. “Long and good.”

Suber also apparently praised the woman who perpetrated the mass shooting at YouTube’s headquarters in 2018.

He wrote: “Nasim did nothing wrong. Except be a bad shot.”