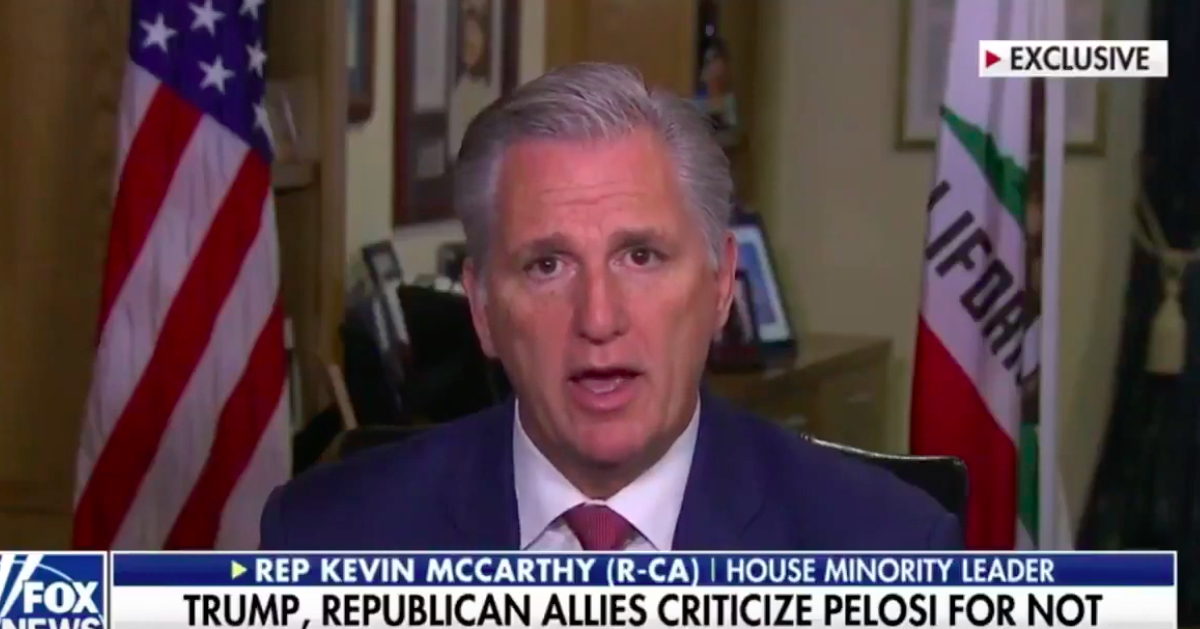 House Minority Leader Kevin McCarthy (R-Calif.) erroneously said that the Justice Department Inspector General’s report proved that the FBI illegally “broke into” the Trump campaign, then orchestrated a cover-up of the unlawful acts. While the report from Inspector General Michael Horowitz did expose out a number of fundamental, “disturbing” errors committed by the FBI in the course of its investigation, national security and legal experts roundly rejected McCarthy’s comments, pointing out that he appeared to be intentionally mischaracterizing the substance of the report’s conclusions.

“Well if you pause for one moment and you read this IG report by Horowitz, here’s the FBI, they broke into President [Donald] Trump – at the time candidate Trump’s – campaign, spied on him, and then they covered it up. It is a modern day Watergate,” McCarthy said.

The House Minority Leader then took this a step further, saying the FBI’s conduct represented a “coup” on the Trump administration.

“That is the area that we should be looking at. It’s a modern day coup, the closest this country’s ever came to. But the only way you can compare this to [sic] is Watergate,” McCarthy continued. “They broke into his campaign by bringing people into it, they had been trying to cover it up for the whole time. Now the question rises, just like Watergate, who knew, when did they know it, and how high did this go up.”

As Law&Crime previously reported, the IG report did find that the bureau committed a multitude of “fundamental errors” and that there was a “disturbing level of sloppiness” in the FISA applications for surveilling former Trump campaign adviser Carter Page. The Horowitz report even resulted in a criminal referral against FBI Office of General Counsel Kevin Clinesmith. Clinesmith was ousted from the FBI after it was alleged that he altered an email used in the renewal of an application for surveilling Page.

Horowitz concluded, however, that the FBI had sufficient factual and legal justification in opening the investigation and was no evidence that the FBI was motivated by political bias (i.e. attempted a “coup”), which the president and supporters like McCarthy continue to allege.

Several legal and national security experts minced no words in response to McCarthy.

“This is not what the IG found,” wrote University of Michigan law professor and former United States Attorney Barbara McQuade. “This is fiction. 1984-esque,” she said, of course referencing George Orwell’s novel about a future totalitarian dystopia.

This is not what the IG found. This is fiction. 1984-esque https://t.co/pOnfKl4cyu

Former intelligence officer with the Central Intelligence Agency Ned Price, also a former Obama administration official, pointed out that McCarthy’s leadership position provides him access to even more detailed information that would further debunk his characterization of the FBI’s conduct.

“This person spouting outright and dangerous lies about our law enforcement and intelligence professionals is a member of the Gang of 8,” Price wrote. “As such, he’s briefed on our most sensitive intelligence collection and covert action programs around the world. Stunning.”

This is a disgusting lie and you know it. Literally not what the report found. https://t.co/uRjY5btEnr

As did attorney George Conway and political scientist Norman Ornstein.

Objectively untrue: IG report identified serious problems that occurred in the FISA process. DOJ & FBI must fix. But the political attacks on FBI & IC agencies will cause lasting damage to Americans’ confidence in institutions that protect them. That’s bad for national security. https://t.co/ZRjuy5eOFe

“Objectively untrue: IG report identified serious problems that occurred in the FISA process. DOJ & FBI must fix. But the political attacks on FBI & IC agencies will cause lasting damage to Americans’ confidence in institutions that protect them. That’s bad for national security,” Cordero said.