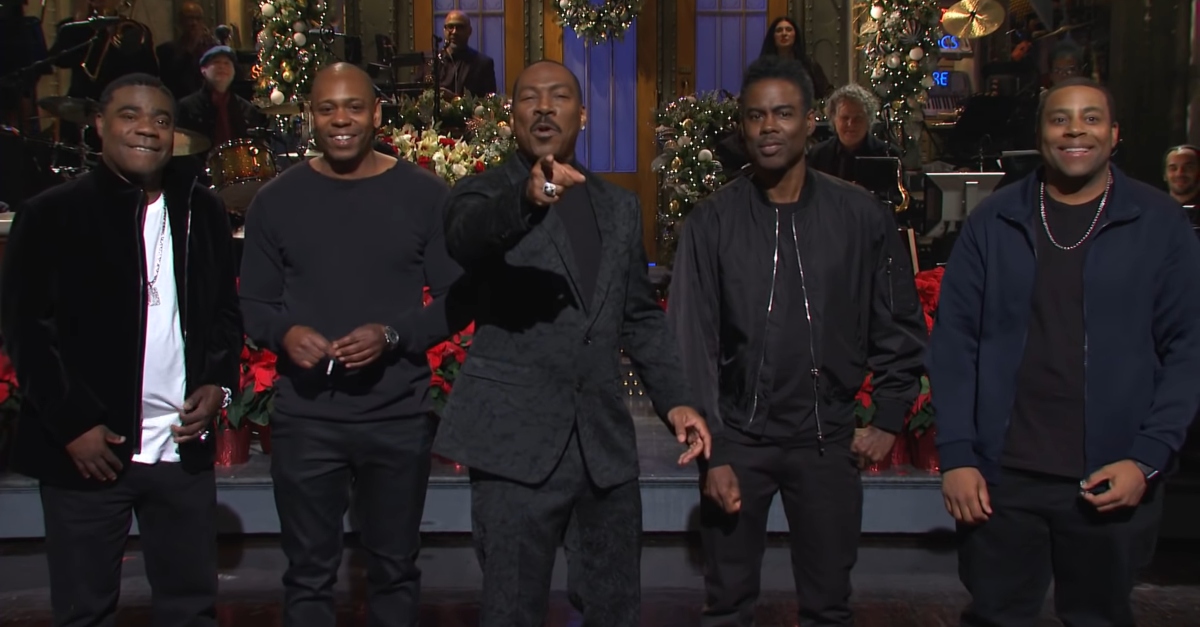 A spokesman for Billy Cosby, a 82-year-old convicted sexual abuser, took issue with Eddie Murphy, 58, making fun of the elder comedian during a recent appearance on Saturday Night Live. In a statement to CNN, the spox called Murphy a “Hollywood Slave,” and used terms like “Stepin Fetchit.”

A spokesman for Bill Cosby has fired back at Eddie Murphy after the comedian made jokes at Cosby’s expense during his opening monologue on Saturday Night Live, @dakinandone reports.

“Hopefully, you will be amenable to having a meeting of the minds conversation, in order to discuss how we can use our collective platforms to enhance Black people rather than bringing all of us down together,” spokesman Andrew Wyatt said.

Murphy hosted the most recent episode of Saturday Night Live. Other high-profile black comedians–Dave Chappelle, SNL alum Chris Rock and Tracey Morgan, and SNL vet Kenan Thompson–joined him for his opening monologue. As part of the bit, Murphy made fun of Cosby’s current legal predicament: the elder comedian is serving prison time in Pennsylvania after being convicted for sexually assaulting former Temple University employee Andrea Constand at his home. Dozens of women said Cosby was a sexual abuser, though this is only case to be adjudicated in criminal court.

“But if you would’ve told me 30 years ago, that I would be this boring stay-at-home house dad, and Bill Cosby would be in jail, even I would’ve took that bet,” Murphy said Saturday. He switched to a Cosby impression. “‘Who is America’s Dad now?'”

Wyatt was clearly not a fan of the bit. In his statement, he highlighted Cosby’s Emmy-winning career, and said that Cosby paved the way for black comedians like Murphy, Chappelle, Kevin Hart “and et al.”

“It is sad that Mr. Murphy would take this glorious moment of returning to SNL and make disparaging remarks against Mr. Cosby,” he wrote.

Those “disparaging” remarks are really nothing new. When accepting the Mark Twain Prize for American Humor in 2015, Murphy knocked Cosby for the sexual abuse allegations.

For the sake of context, Chappelle and Rock have stories about meeting Murphy when they were up-and-coming comedians. In both tales, they describe him as as being very supportive. Even before the sexual abuse allegations, however, Murphy didn’t publicly show that much respect to Cosby, who was long an elder statesman of comedy. Murphy famously knocked Cosby in the 1987 comedy special Raw, telling a story in which Cosby chastised him for his vulgar material.