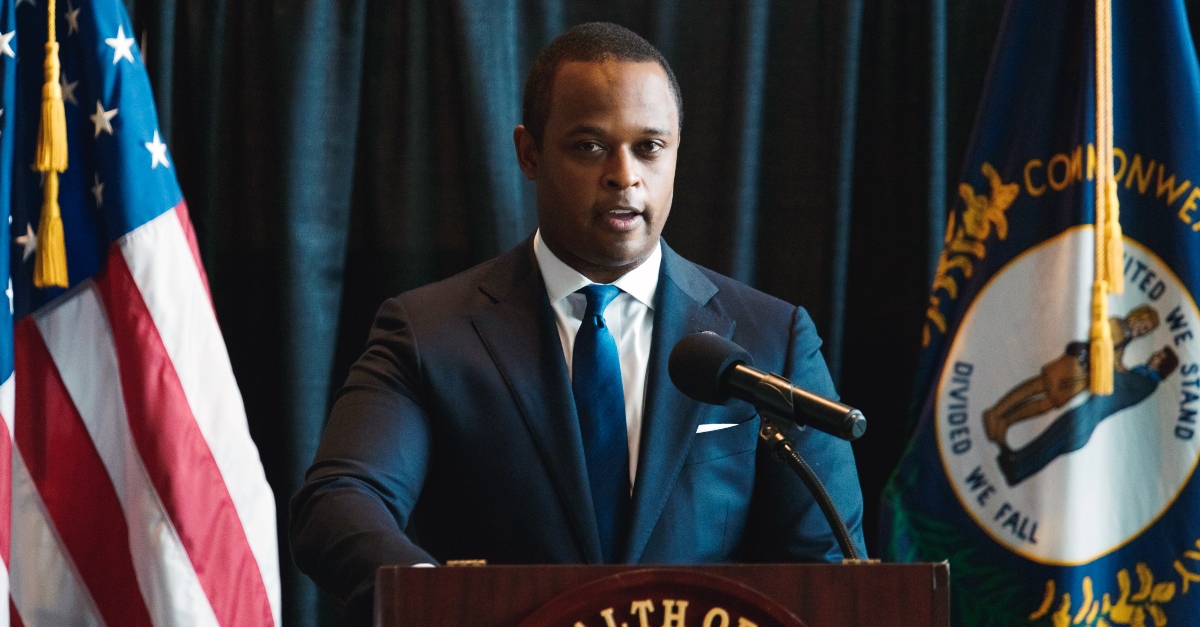 A grand juror in the Breonna Taylor case was given permission to speak freely about what occurred during those secretive and controversial proceedings conducted earlier this year.

“This is a rare and extraordinary example of a case where, at the time this motion is made, the historical reasons for preserving grand jury secrecy are null,” Jefferson Circuit Court Judge Annie O’Connell wrote in her Tuesday opinion and order.

The ruling came after an anonymous juror sued the Commonwealth of Kentucky late last month in a series of motions seeking the release of grand jury records and affirming their right to speak out about what happened behind closed doors. That lawsuit was filed amidst an uproar over the charging decisions in Taylor’s case.

Kentucky Attorney General Daniel Cameron (R) ultimately opted against filing charges against two Louisville Metro Police Department officers who opened fire during the deadly raid. Cameron said they were justified in firing their service weapons because Taylor’s boyfriend Kenneth Walker fired first. Walker shot Sgt. Jonathan Mattingly in the leg. Walker said that officers failed to identify themselves and didn’t know they were at the door of the apartment. Cameron said that there was a witness that said police did announce themselves at the door. (That witness reportedly changed his story after initially saying nobody identified themselves.)

Only one officer, former Detective Brett Hankison, was charged with three counts of wanton endangerment in the first degree, a felony with a maximum penalty of five years in prison and/or a $10,000 fine.

Criticism followed and an anonymous grand juror apparently felt that Cameron’s comments about the case at a press conference did not accurately describe what happened behind closed doors. Cameron’s office filed a motion in opposition to the release of the grand jury’s records but was ultimately unsuccessful.

“In objecting to this motion, the attorney general speculates that allowing this grand juror to speak may compromise Brett Hankison’s right to a fair trial,” the court said. “When asked to be more specific about its concerns, the Commonwealth acknowledged it did not know how allowing this grand juror to speak would undermine Hankison’s trial. Therefore, this court cannot find that this concern is founded in reality.”

The judicial upbraiding, which characterizes Cameron’s objection to the release of grand jury materials as “theatrical,” continues on for a bit longer [emphasis in original]:

The Commonwealth also asserts that to release information about the grand jury proceedings in this case would “destroy the principle of secrecy that serves as the foundation of the grand jury system.” To be clear, this Court’s ruling on this motion is applicable only to this case. Further, when considering the Attorney General’s swift compliance with the trial court’s order to release the grand jury recordings, coupled with the Attorney General’s multiple public statements and characterizations about the grand jury and the resulting indictment, the Commonwealth’s objection now reads as theatrical sturm und drang.

Judge O’Connell’s order specifically allows any grand juror to speak out about what happened when Cameron and his team presented their investigation–including parts of the proceeding not already committed to a recorded medium; meaning the shroud of judicial secrecy has been all-but entirely lifted in the case.

“As applied in this case, this court finds that the traditional justifications for secrecy in this matter are no longer relevant and that the ends of justice require disclosure,” the ruling says.

The order offers a summary explanation for why the typically secret proceedings should be made available in Taylor’s case:

There exist additional interests to consider in making this decision: the interest of the citizens of the Commonwealth of Kentucky to be assured that its publicly elected officials are being honest in their representations; the interest of grand jurors, whose service is compelled, to be certain their work is not mischaracterized by the very prosecutors on whom they relied to advise them; and, the interest of all citizens to have confidence in the integrity of the justice system. Considering those interests, there is no doubt that justice requires disclosure of the grand jury proceedings in this case.”

O’Connell goes on to say that there are not practical considerations that preclude against the release of the grand jury information.

“[T]here can be little concern that additional witnesses will be deterred from coming forward,” the order explains, before criticizing Cameron again. “At least, there is little concern that releasing the remaining undisclosed grand jury proceedings would create that effect. Rather, it is more likely that the already highly public nature of this matter (generated in part by the attorney general’s own press releases, interviews and press conferences), and not the release of grand jury proceedings, would have that consequence.”

On early Tuesday morning, National Review published a story on how the attorney general was subject to what he called “beyond the pale” racist attacks for being a  Black conservative and for his decision-making in the Breonna Taylor case.

The judge’s ruling also makes clear that the identities and personal information of the grand jurors will still remain secret but provides that any grand juror who wishes “to do so” may speak out either anonymously or by revealing their identity. For those would-be grand jurors in the latter column, however, O’Connell cautioned that such a move would invite extreme media and public scrutiny.

“Furthermore, this order is not intended to coerce, compel or even encourage any grand juror to come forward,” the court notes. “It merely grants one grand juror’s request to do so and gives others the option. Grand jury deliberations are a collaborative process. Any one grand juror’s memory, opinions and perceptions are their own. No one grand juror speaks for the others, nor does one’s statement carry any more weight than another’s.”

The anonymous grand juror who initiated the legal proceedings immediately took the court up on its offer by releasing a statement that criticized Cameron and his office for the way they presented the Taylor case:

Being one of the jurors on the Breonna Taylor case was a learning experience. The three weeks of service leading up to that presentation showed how the grand jury normally operates. The Breonna Taylor case was quite different. After hearing the Attorney General Daniel Cameron’s press conference, and with my duty as a grand juror being over, my duty as a citizen compelled action.

The grand jury was not presented any charges other than the three wanton endangerment charges against Detective Hankison. The grand jury did not have homicide offenses explained to them. The grand jury never heard anything about those laws. Self defense or justification was never explained either. Questions were asked about additional charges and the grand jury was told there would be non because the prosecutors didn’t feel they could make them stick.

The grand jury didn’t agree that certain actions were justified, nor did it decide the indictment should be the only charges in the Breonna Taylor case. The grand jury was not given the opportunity to deliberate on those charges and deliberated only on what was presented to them. I cannot speak for other juror, but I can help the truth be told.

A second grand juror represented by the same attorney as the first anonymous grand juror said they were pleased with the court’s decision and would be weighing their options soon.