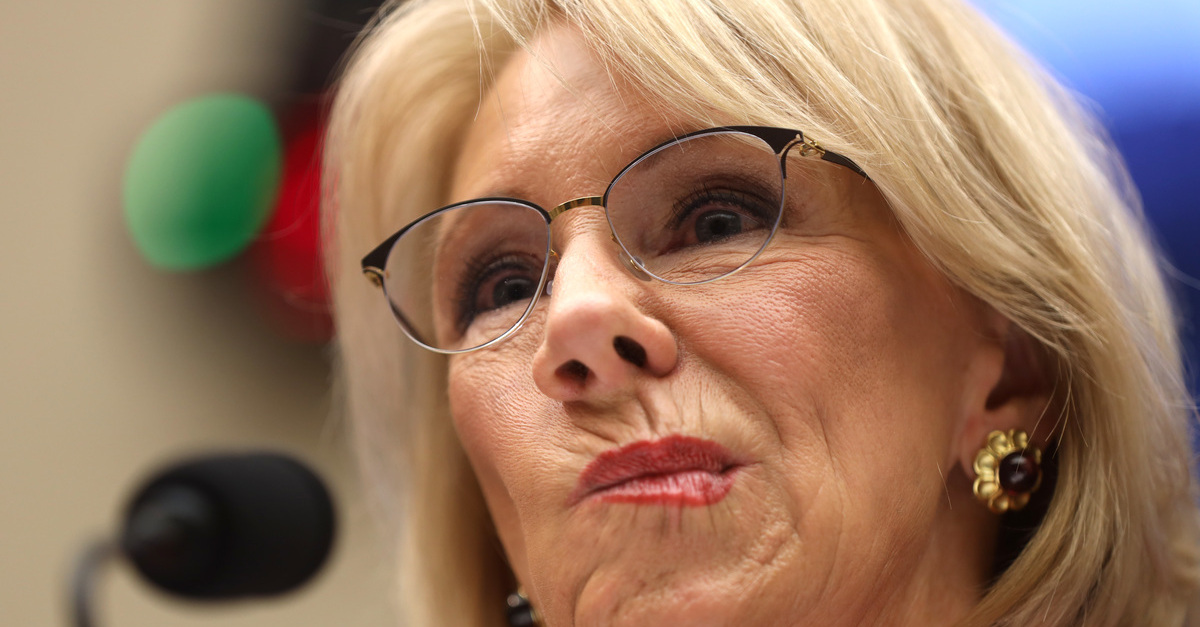 A federal judge in California on Monday issued a scathing rebuke of U.S. Secretary of Education Betsy DeVos, saying that her department has failed to process applications for student loan forgiveness and issued mass denials without proper consideration.

“Following preliminary approval of a proposed class settlement meant to restart Department of Education (DoE) review of student-loan borrower-defense applications under the Higher Education and Administrative Procedure Acts (APA), the Secretary’s new perfunctory denial notices undermine the proposed settlement, contradict her original justification for delay, raise substantial questions under the APA, and may impose irreparable harm upon the class of student-loan borrowers,” U.S. District Judge William Aslup, an appointee of President Bill Clinton, wrote in the opening sentence of his order denying approval of the class action settlement.

The case stems from the DoE’s changes to the Borrower Defense to Repayment Program since DeVos took over the department, including the implementation rules that made it more difficult for borrowers to file claims against schools by significantly increasing the amount of proof required to show potential fraud. The department also essentially stopped processing new applications for nearly 18 months, from June 2018 until December 2019.

The court in May approved a preliminarily proposal for DeVos to decide claims and effect relief, but due to DeVos’s conduct, Aslup said that deal is no longer on the table.

“Then came the snag,” Aslup wrote. “Class counsel discovered that the Secretary had been issuing alarmingly-curt denial notices for several months, in violation (as class counsel put it) of both the spirit of the proposed settlement and the Administrative Procedure Act. “

Citing to letters and video testimony given during a fairness hearing earlier this month, Aslup said the borrowers have good reason to believe DeVos hadn’t processed their applications in good faith.

“It’s no wonder borrowers are confused. The Secretary’s perfunctory denial notice does not explain the evidence reviewed or the law applied. It provides no analysis. And, the borrower’s path forward rings disturbingly Kafkaesque,” he wrote. “Without any meaningful analysis of the evidence under the law, how might a borrower articulate such bases for reconsideration? It is, after all, impossible to argue with an unreasoned decision.”

“Simply put, where there’s smoke, there’s fire. After justifying eighteen months of delay largely on the backbreaking effort required to review individual applications, distill common evidence, and ‘reach considered results,’ the Secretary has charged out of the gate, issuing perfunctory denial notices utterly devoid of meaningful explanation at a blistering pace,” the order stated. “Set aside even the question of whether this form denials is, in fact, a legally sufficient ‘final decision’ under the proposed agreement, the APA, department regulations, and due process. The issue here is that ‘the evidence tells a story that does not match the explanation the Secretary gave for h[er] decision.’ Judicial review of agencies is deferential — not naïve. Courts will not suffer pretext in the review of agency conduct.”

Order Denying Settlement Show Cause by Law&Crime on Scribd