Judge Nap to Paul Manafort Judge: Stop Making This About You | Law & Crime

Judge Nap Calls Out Manafort Judge: Stop Making This About You 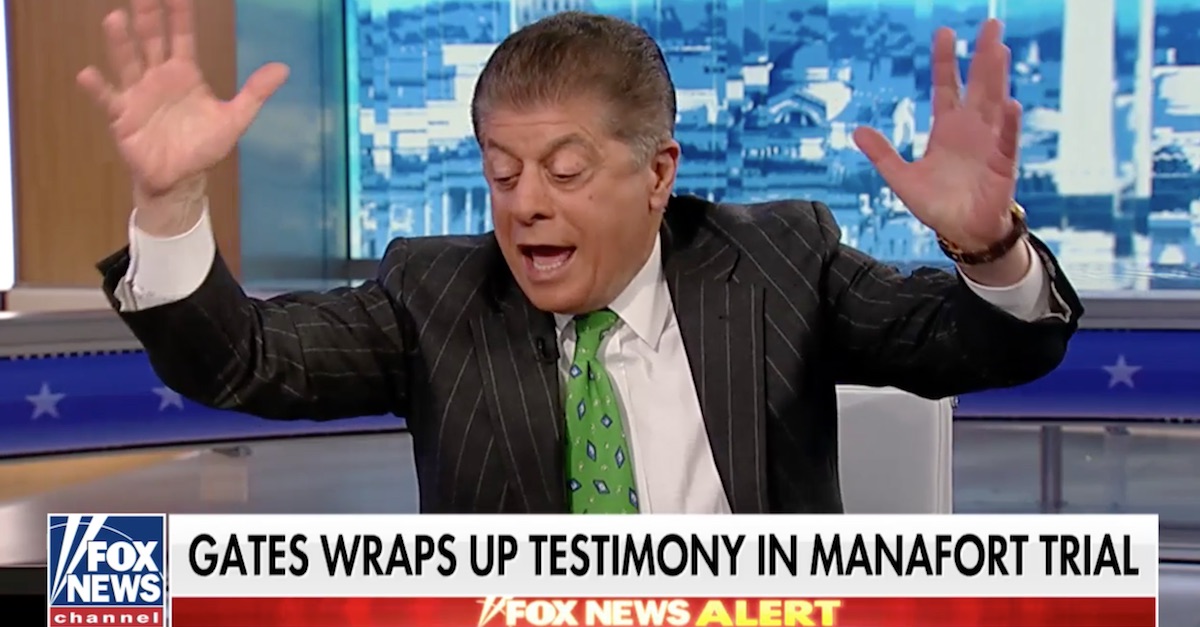 Fox News senior judicial analyst Judge Andrew Napolitano expressed his displeasure with the judge presiding over Paul Manafort‘s tax and bank fraud trial in Virginia by telling him to stop making this about him.

Napolitano said T.S. Ellis III has shown an “extraordinary bias” against the government, which means he believes the judge has a bias against special counsel Robert Mueller and his team of prosecutors.

“I’m not happy with this judge. He’s making too much of the case about him and he’s showing an extraordinary bias against the government. If you feel that negatively about the government, you shouldn’t be on the case,” Napolitano said during a segment with Dana Perino. “Or you have to keep those feelings to yourself, not manifest them. You and I were talking during the break, the jury can’t be happy with this judge because of the snide, snarky comments.”

Speaking of Ellis snark, the Ronald Reagan-appointed Eastern District of Virginia judge earlier Wednesday said something Napolitano might also disapprove of. Ellis said that, given his temperament, maybe he shouldn’t have been confirmed as a judge in the first place. The line was uttered when Ellis had apparently grown tired of the pace Manafort’s defense and the special counsel’s prosecutors were operating at.

He quipped: “Judges should be patient. They made a mistake when they confirmed me. I’m not very patient, so don’t try my patience.”

Napolitano’s comment about the impact of these kinds of remarks on the jury is another thing that has been a focus of former federal prosecutors who have observed the developments at trial.

It’s worth mentioning that there have been times Ellis has dished out some pain to Manafort’s side, too.