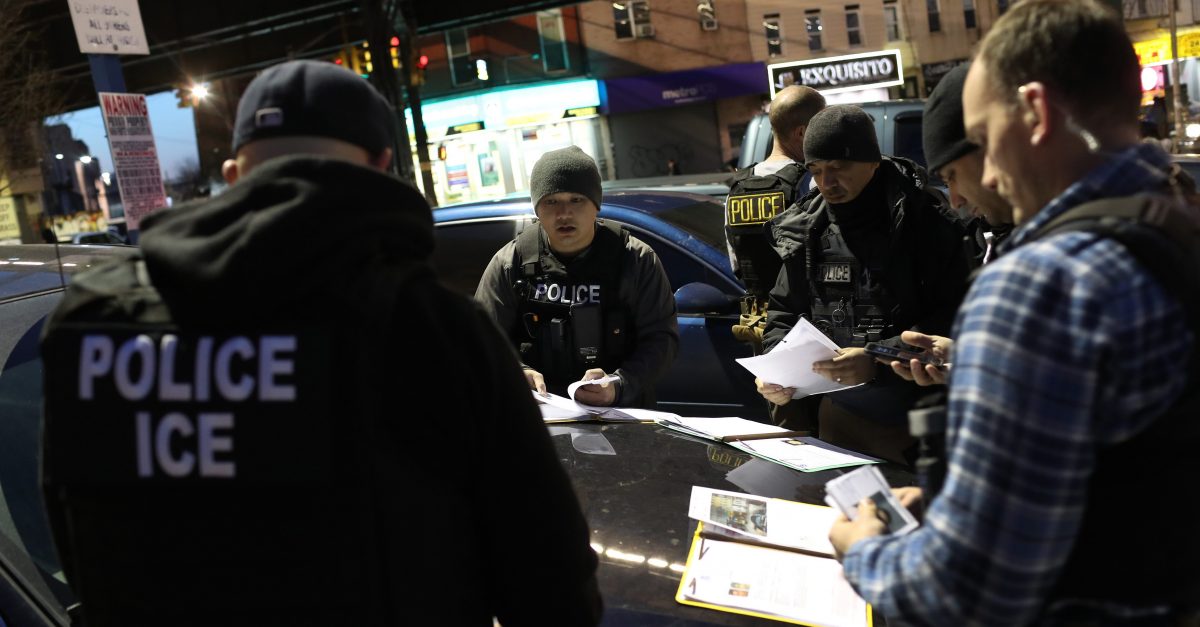 Immigration and Customs Enforcement (ICE) crashed a van full of detained immigrant mothers and then repeatedly denied the crash ever occurred. A police report and interviews with some of the passengers, however, prove that the immigration agency misrepresented the issue in response to various media inquiries.

On July 18, a cargo van transporting eight Central American mothers separated from their children under Trump’s “zero tolerance” policy crashed into a pickup truck in San Marcos. An ICE contractor was taking the women from a detention center near Austin to the South Texas Detention Complex in Pearsall to be reunited with their kids… [P]olice said the van was too damaged to continue driving and the women reported injuries.

Upon being alerted to the incident by Austin-area immigration activists on July 19, the Observer contacted ICE. The next day, ICE spokesperson Leticia Zamarripa responded in an email to the outlet’s inquiries. She wrote, “Your sources misinformed you. There was no crash.”

That’s very much incorrect. There was a crash. And there was a police report filed on said crash.

According to the Texas Peace Officer’s Crash Report filed on July 18:

On this form, the investigating officer confirmed that ICE’s van suffered a great deal of damage. Per the form, the damage suffered was in excess of $1,000 and the officer marked a box indicating that the damage was “disabling” to the van. In fact, the damage from the crash was so disabling that the van had to be towed by a “Private Tow” company, according to the crash report.

Line 27 on the form contains an equation used by the Texas Department of Transportation (TxDOT) known as the Vehicle Damage Rating. By adding the direction of force to the damage description, an officer arrives at the Damage Severity Rating. This is a 0-7 point scale–with “0” indicating no damage whatsoever. The July 18 van crash resulted in a severity rating of “4.” While TxDOT admits their equation is not exact, a “4” rating typically equates to “moderate damage,” according to a guide prepared for officers by the agency.

In comments to the Observer, one woman said, “The crash was really strong, like maybe we were going to flip.” Another woman said, “We were all trembling with shock from the accident; my whole body hurt.” Both women declined to be fully identified out of fear that they may be targeted by the government over their responses.

Law&Crime reached out to Zamarripa in order to understand why she represented that no crash occurred to the Texas Observer.  In an email chain, Zamarripa declined to comment and forwarded the inquiry to ICE Public Affairs Officer Adelina “Nina” Pruneda, who provided the following statement in response:

On July 18, 2018, eight female detainees were transferred by van from the T. Don Hutto Detention Center in Taylor, Texas, to the South Texas Detention Complex (STDC) in Pearsall, Texas. During the transfer, the ICE transportation contractor stopped at a gas station at about 4 p.m. in San Marcos, Texas. While exiting the parking lot the van was involved in a fender bender with a pick-up truck that was turning into the parking lot, which resulted in minor damage to both vehicles. Both vehicles remained operable. EMS evaluated the detainees on site and were cleared to travel; they declined any further medical attention. STDC medical personnel did not report any injuries or any complications The local Police Department was notified and produced a report of the incident.

In additional comments to Law&Crime, Pruneda wrote, “The vehicle remained ‘operable.’  We are NOT providing any additional information.”