Senior U.S. District Judge Loretta A. Preska explained right out of the gate that she was required to accept Giuffre’s allegations as true at this point in time, and therefore the suit would not be dismissed.

“Neither the truth of Giuffre’s underlying claims nor Dershowitz’s denial thereof is before the Court,” Preska said, before saying she was “required to accept as true at this stage” the allegations.

Giuffre, an alleged victim of Jeffrey Epstein’s sex trafficking scheme, claimed that Dershowitz not only knew about Epstein’s operation, but was also a participant, saying that she was forced to have sex with multiple rich and powerful men, including Dershowitz. According to Giuffre, Dershowitz had sex with her while she was a minor and working for Epstein.

The 81-year-old Dershowitz, who was among the attorneys who represented Epstein and secured him a controversial plea deal more than a decade ago, has repeatedly denied Giuffre’s claims, calling her a “certified, complete, total liar.” Giuffre’s lawsuit asserts that Dershowitz’s statements about her claims are knowably false and maliciously designed to cover up his own wrongdoing while discrediting her claims.

Dershowitz has denied the veracity of Giuffre’s claims, insisting that the two have never even met.

“Our position is that I’ve been truthfully calling Giuffre a liar regularly since she falsely accused me in 2014. I will continue to tell the truth whenever she falsely accuses me,” Dershowitz previously told Law&Crime. “If she believed I defamed her in 2014, 2015, 2016 and 2017, she could have sued me then. I will defend my First Amendment right to truthfully deny a false charge. To paraphrase Adlai Stevenson: if my false accuser stops lying about me, I will stop telling the truth about her.”

Dershowitz still managed to salvage something significant on Wednesday. Dershowitz argued that his nemesis David Boies, Giuffre’s attorney, should be disqualified from representing her in the case. As the judge summarized:

Dershowitz argues that the Firm’s [Boies Schiller Flexner] partners and associates will not have the necessary independence to pursue a line of questioning that might damage the professional reputation of the name partner of their firm in favor of a client. At a minimum, the scenario Dershowitz paints–which cannot be disregarded–would be unseemly in the extreme.

The judge then turned to tape-recorded evidence that Dershowitz “contends support the truth” that he was extorted. The transcript of the recording quotes Boies as saying to Giuffre, “We have reviewed the documentary evidence and we are convinced that your belief [that you had relations with Dershowitz] is wrong and we would like to explore with you how you could have come to this conclusion that is wrong.”

Giuffre admits the tapes exist and “alleges that they purport to show statements made by Boies that ‘based on what was shown in [Dershowitz’s] summary, it would have been impossible for [Giuffre’s assertions about him to be true, and that if his assertions proved out, [Giuffre’s counsel would undertake to convince her that she must have made a mistake.'”

Giuffre argues that the recording is inadmissible, and the judge made an amusing remark about the recording after quoting Dershowitz. Dershowitz said before that he “was not wearing his attorney hat when that was recorded” — “whatever that means,” the judge said.

Whether that recording is admissible will be determined at trial, the judge ruled — before delving into why Boies and his firm were being disqualified from the case. 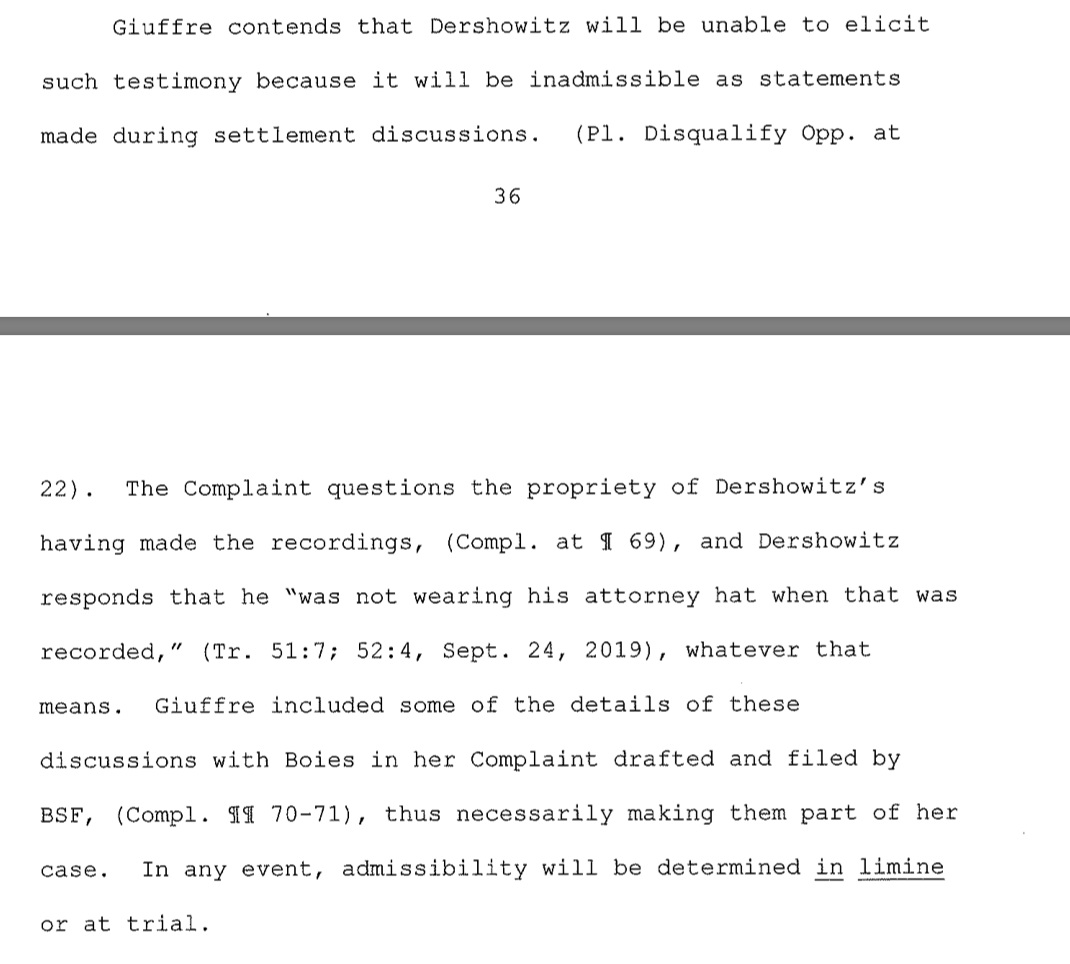 In short, the judge said, “It is plain that several of the Firm’s lawyer will be essential trial witnesses on a major claim in the Complaint,” namely alleged extortion. 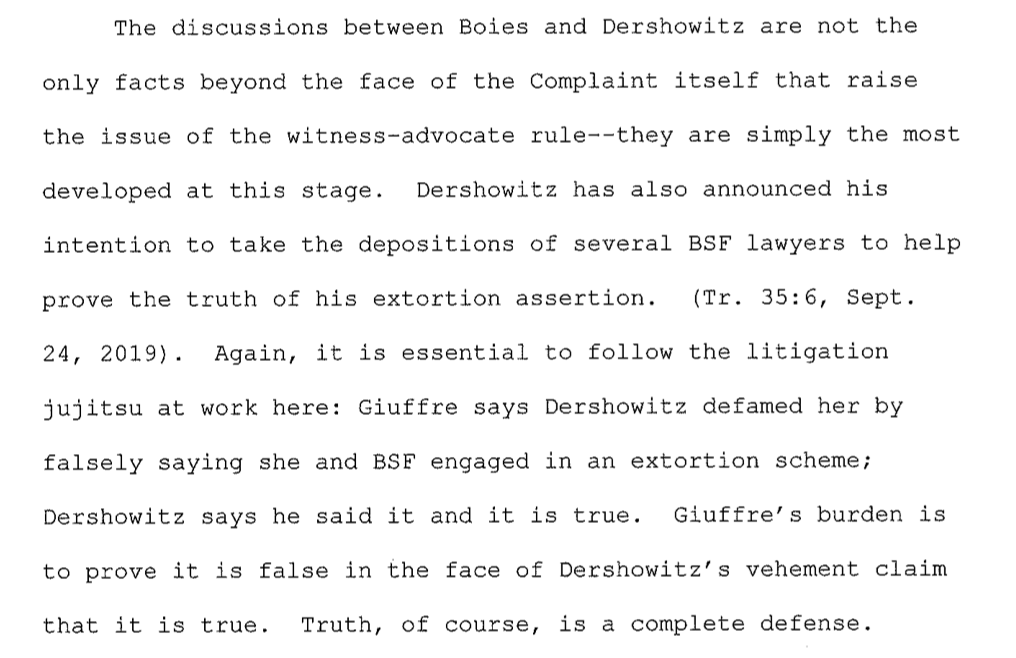 For the sake of preserving the “integrity of the adversary process,” the judge disqualified the firm. 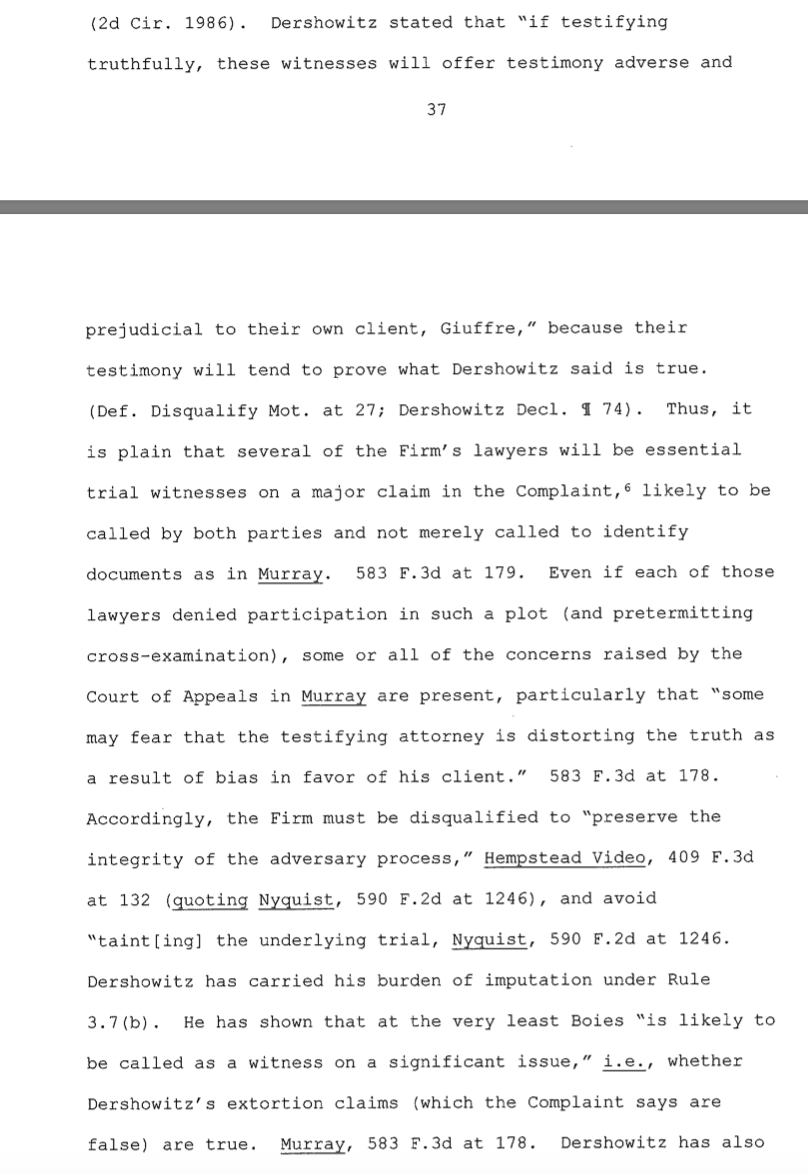 Dershowitz and Boies sparred publicly a few months back.

As reported by Law&Crime, Dershowitz vigorously defended his “sexual probity,” and accused Boies of lying in an attempt to “destroy” his reputation. Boies called Dershowitz’s allegations “absurd,” and said it was nothing more than an attempt to “make this between him and me.”

“For some unknown and unknowable reason, I’ve decided to go after him. That’s absurd. It’s disproved,” Boies said. Boies would add that he was “initially very impressed with the representations [Dershowitz] made” regarding his whereabouts during the time period relevant to the Giuffre allegations. However, Boies claimed that flight logs from Epstein’s plane–dubbed in the media as the “Lolita Express”–contradicted Dershowitz’s details, particularly that he never traveled without his wife.

Dershowitz doubled-down, insinuating that Boies is the one that should be worried about a checkered sexual past.

“[Boies] is also aware that there are soon to unsealed emails and a book manuscript in which my false accuser admits she never had sex with me. I will swear under oath that from the day I first met Epstein until today, I have had no sexual contact with any woman but my wife,”, Dershowitz tweeted before issuing a challenge to Boies. “I have challenged Boies to swear that he has not had inappropriate sex contacts with women other than his wife during the same period. He won’t because he has a terrible reputation with regard to inappropriate sex. How dare he falsely accuse me.”

Judge denies Dershowitz motion to dismiss by Law&Crime on Scribd