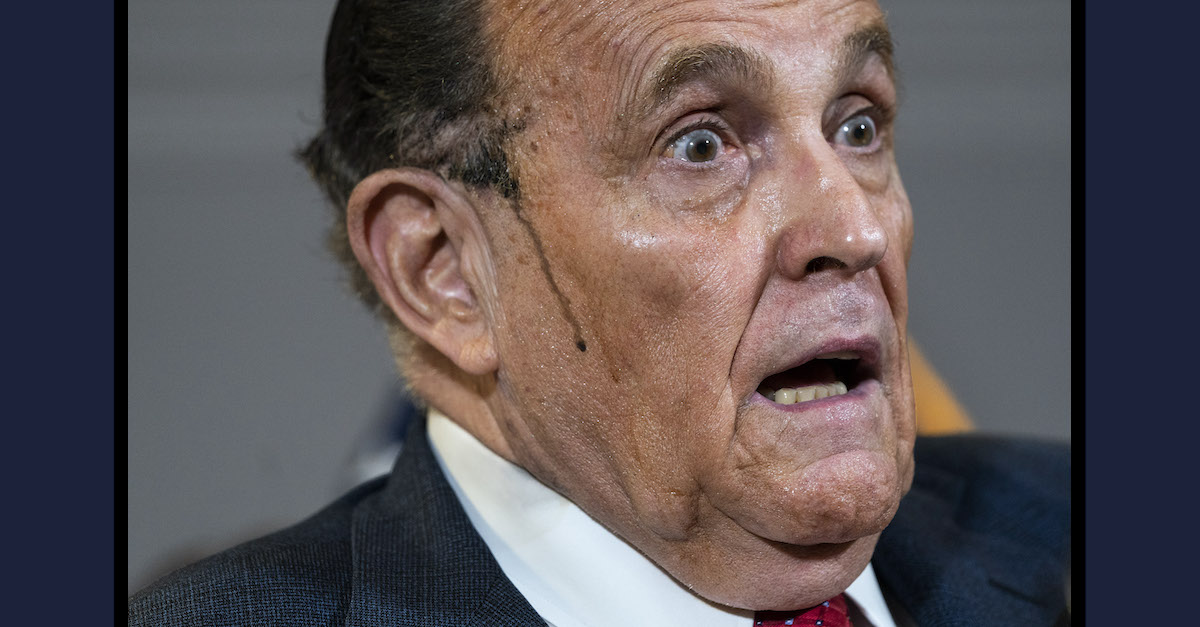 Rudy Giuliani speaks to the press about various lawsuits related to the 2020 election inside the Republican National Committee’s headquarters on November 19, 2020.

Filed in December 2021, Ruby Freeman and Wandrea “Shaye“ Moss allege that the man once known as “America’s mayor” defamed them when he falsely claimed they had engaged in election fraud as ballot-counters at the State Farm Arena in Atlanta, Georgia.

“As election workers across the state worked long hours carefully ensuring the accuracy of the election, the Trump Campaign and its allies, including Giuliani, engaged in a media offensive that at best questioned, and at worse condemned, their work,” U.S. District Court for the District of Columbia Chief Judge Beryl A. Howell wrote in a 25-page opinion accompanying the order denying the motion to dismiss.

The opinion takes stock of the allegedly defamatory actions and Giuliani’s role in spreading that information around:

On December 3 [2020], plaintiffs—who had been counting absentee ballots and participating in the recount in Fulton County at the State Farm Arena—were drawn into this offensive, when “Trump Campaign surrogates testified before the Georgia Senate, alleging that fraud and misconduct had occurred during Georgia’s November 2020 election.” In support of their allegations, “a lawyer assisting the Trump Campaign played snippets,” of a “State Farm Arena security camera video showing grainy images of two women,” later identified as plaintiffs, “counting ballots.” The Trump Campaign witnesses alleged that after “Republican observers had been asked to leave the arena[,] in contravention of Georgia law,” the women in the video clip and “other election workers [had] produced and counted 18,000 hidden, fraudulent ballots.” The witness “referred to ‘suitcases of ballots [stored] under a table, under a tablecloth’” and stated that one of the women in the video clip “had the name Ruby across her shirt somewhere,” but did not otherwise identify the women by name. The same day, the Trump Campaign repeated the same allegations on Twitter, sharing the Edited Video “and tweet[ing] that it showed ‘suitcases filled with ballots pulled from under a table AFTER supervisors told poll workers to leave room and 4 people stayed behind to keep counting votes.’” Giuliani shared the Trump Campaign tweet “repeatedly . . . on his own Twitter account” on December 3 and 4, repeating the same caption.

As Law&Crime previously reported, Moss is Freeman’s daughter. Giuliani went quite a bit further than the court’s heavily annotated record suggests – explaining away Trump’s narrow but decisive loss in the Peach State by saying that Moss handed her mother “USB drives” full of votes, “as if they were vials of heroin or cocaine.”

In actuality, Moss handed her mother “a ginger mint,” she told the January 6th Committee in June of this year.

The mother and daughter sued the right-wing One America News (OAN) Network and Giuliani in a federal court in Washington, D.C. after receiving a bevy of death threats and racial harassment. Both women are Black. The lawsuit against OAN was later settled but the one against Giuliani will now move forward with discovery.

On the merits, Giuliani tried to have the lawsuit dismissed by arguing that he was engaged in constitutionally protected opinion.

The court rubbished that idea.

“Giuliani’s alleged statements accuse plaintiffs of criminal activity—which can be proven to be true or false in court—and, consequently, he cannot seek refuge under the opinion doctrine,” Howell wrote. “Even if Giuliani made clear that his statements were his own subjective views, those statements still included accusations of election fraud that can be verified as true or false.”

Giuliani additionally attempted to have the lawsuit dismissed by claiming that it was barred by the statute of limitations, that he did not specifically refer to the plaintiffs by name, and because he was not the author of the statements in the so-called “Strategic Plan” used by Trump’s post-election loss team that made unfounded accusations of electoral fraud.

Each of those arguments were also dismissed in turn.

“Giuliani’s motion to dismiss is denied and the entirety of plaintiffs’ claims may advance to discovery,” the court concluded.