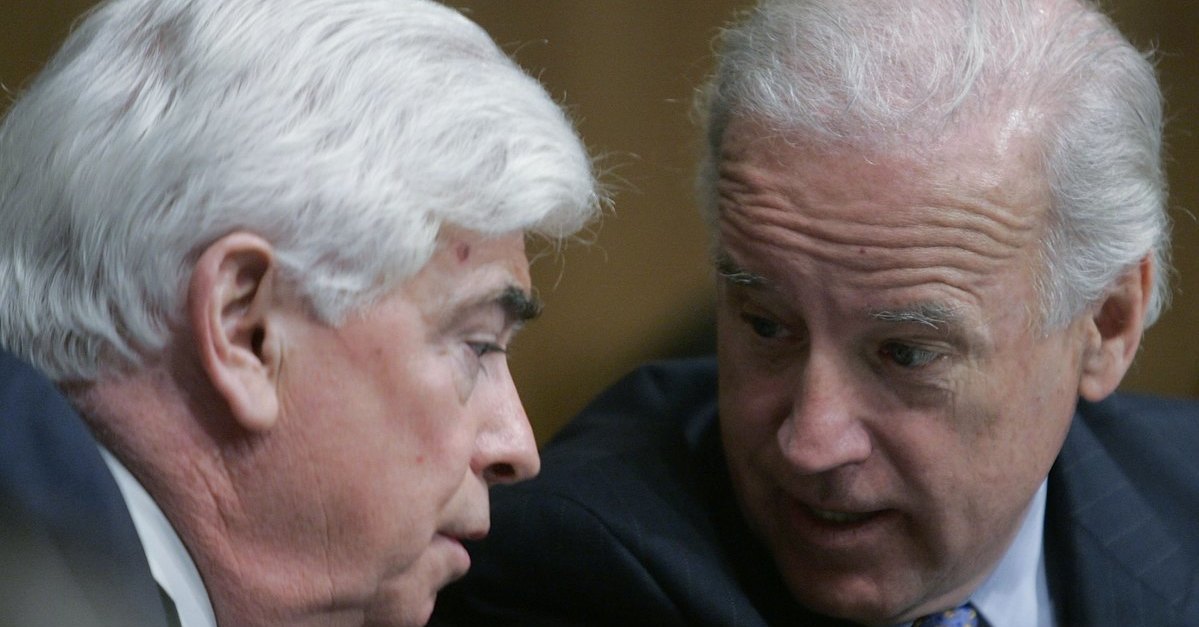 Former vice president and presumptive Democratic Party nominee for president Joe Biden announced the formation of his vice presidential selection committee on Tuesday. The name atop that list, Chris Dodd, immediately drew criticism for an alleged sexual assault the political scion (his father was also a senator) committed in 1985.

Former senators Dodd and Ted Kennedy were accused of sexual assault by Carla Gaviglio in press accounts beginning in 1989.

A February 1990 article in GQ described the incident in detail:

In December 1985, just before he announced he would run for president in 1988, Kennedy allegedly manhandled a pretty young woman employed as a Brasserie waitress. The woman, Carla Gaviglio, declined to be quoted in this article, but says the following account, a similar version of which first appeared in Penthouse last year, is full and accurate:

It is after midnight and Kennedy and Dodd are just finishing up a long dinner in a private room on the first floor of the restaurant’s annex. They are drunk. Their dates, two very young blondes, leave the table to go to the bathroom. (The dates are drunk too. “They’d always get their girls very, very drunk,” says a former Brasserie waitress.) Betty Loh, who served the foursome, also leaves the room. Raymond Campet, the co-owner of La Brasserie, tells Gaviglio the senators want to see her.

As Gaviglio enters the room, the six-foot-two, 225-plus-pound Kennedy grabs the five-foot-three, 103-pound waitress and throws her on the table. She lands on her back, scattering crystal, plates and cutlery and the lit candles. Several glasses and a crystal candlestick are broken. Kennedy then picks her up from the table and throws her on Dodd, who is sprawled in a chair. With Gaviglio on Dodd’s lap, Kennedy jumps on top and begins rubbing his genital area against hers, supporting his weight on the arms of the chair. As he is doing this, [Betty] Loh enters the room. She and Gaviglio both scream, drawing one or two dishwashers. Startled, Kennedy leaps up. He laughs. Bruised, shaken and angry over what she considered a sexual assault, Gaviglio runs from the room. Kennedy, Dodd and their dates leave shortly thereafter, following a friendly argument between the senators over the check.

Eyewitness Betty Loh told me that Kennedy had “three or four” cocktails in his first half hour at the restaurant and wine with dinner. When she walked into the room after Gaviglio had gone in, she says, “what I saw was Senator Kennedy on top of Carla, who was on top of Senator Dodd’s lap, and the tablecloth was sort of slid off the table ’cause the table was knocked over—not completely, but just on Senator Dodd’s lap a little bit, and of course the glasses and the candlesticks were totally spilled and everything. And right when I walked in, Senator Kelly jumped off…and he leaped up, composed himself and got up. And Carla jumped up and ran out of the room.”

Kennedy reportedly said something akin to that and added: “Makes you wonder about the leaders of this country.”

The incident involving Dodd, Kennedy and Gaviglio has been widely reported and discussed for decades. Dodd never personally addressed the allegation.

The “waitress sandwich” sexual assault was also reported in Cockburn and Silverstein’s book, Washington Babylon. Dodd and Kennedy were part of the crowd Biden ran around with in the senate in the 70s & 80s… https://t.co/kZDGsfDjTJ

“The job of being the vice presidential candidate is always hard and now it’s just harder because of this,” progressive activist and former congressional candidate Susannah Randolph recently told Politico. “But they don’t really have a choice. The fact is, to be a running mate, you have to be a team player and step up where your team is weak or fill that role where they need you.”

Evidence has swiftly mounted in Biden accuser Tara Reade’s favor in recent days–beginning with the unearthing of a Larry King Live clip from 1993 in which a woman Reade has identified as her mother discusses her daughter’s “problems” with a “prominent senator.”

Earlier this week, the Reade story gained significant traction and corroboration when, Lynda LaCasse, a former neighbor of Reade’s came forward to describe the incident–making her the third person on the record who supports Reade’s claim against Biden.

The Dodd choice has not gone unobserved by Beltway journalists.

“This was also the first thing I thought of when I saw that Dodd was leading the VP vetting committee,” tweeted Pulitzer Prize winning journalist Ryan Grim. “The Senate was a lecherous place in the 80s and 90s. Go read this famous piece if you haven’t.”

“It’s just incredible that [Biden], in the middle the Tara Reade imbroglio, picked Chris Dodd as a co-chair for his VP selection committee,” said Vice News senior political reporter Cameron Joseph. “Dodd was Ted Kennedy’s wingman and was accused of participating in sexually assaulting a waitress.”

Biden’s campaign has dismissed Reade’s allegation. Biden himself has not personally addressed the issue. The Washington Post editorial board has called on Biden to do so.