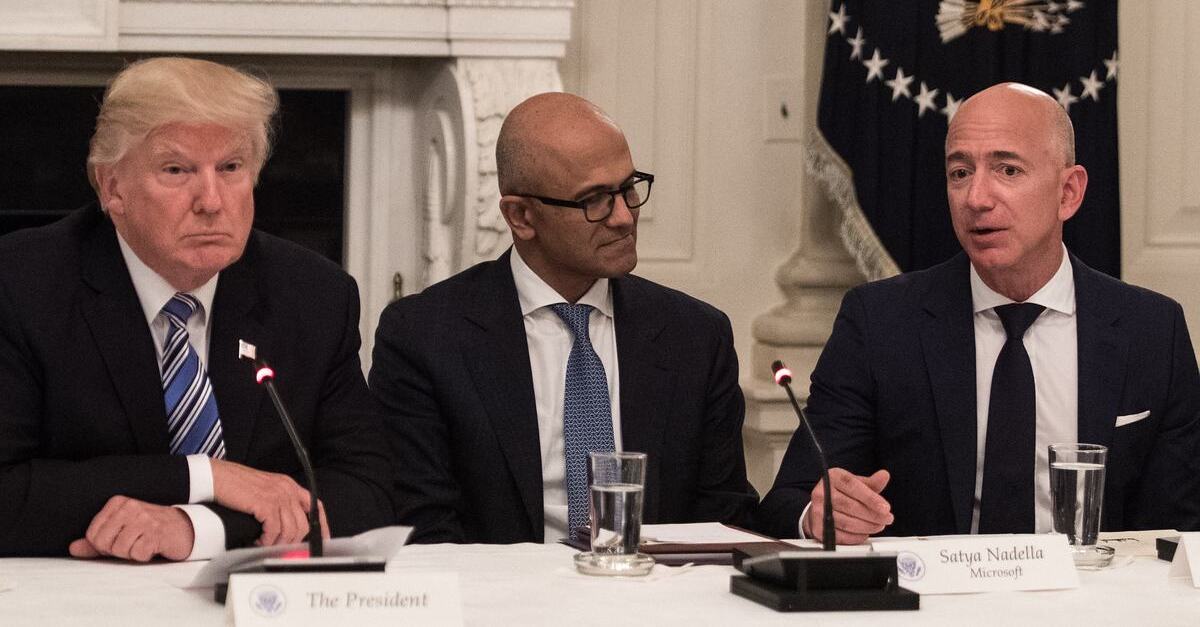 A federal judge who sits on an obscure court in Washington, D.C. ruled in favor of the oft-alleged Amazon monopoly in a multi-party dispute between the White House and previously alleged monopoly Microsoft. The dispute centers on a plum Department of Defense (DOD) contract which Jeff Bezos believes is rightfully his and more or less was unlawfully taken away by President Donald Trump in a fit of pique.

“While we are disappointed with the additional delay we believe that we will ultimately be able to move forward with the work to make sure those who serve our country can access the new technology they urgently require,” Microsoft’s Vice President of Communications Frank Shaw said in a statement. “We believe the facts will show they ran a detailed, thorough and fair process in determining the needs of the warfighter were best met by Microsoft.”

Amazon’s attorneys framed the fundamental issue in the following terms: “The question is whether the President of the United States should be allowed to use the budget of DoD to pursue his own personal and political ends.”

The Post has been a particularly voluble critic of the Trump administration and many of its allies.

Trump, in turn, has lobbed his typical “fake news” label at the outlet–essentially accusing the storied paper under Bezos of being part of the liberal media establishment and making up stories to harm Trump presidency. So, the bad blood between the White House and Amazon is shared and passed back-and-forth by something like a constantly cycling tandem transfusion system.

“Any meaningful review of [the DOD’s] decision reveals egregious errors on nearly every evaluation factor,” Amazon’s filing claims, “from ignoring the unique strengths of [Amazon’s] proposal, to overlooking clear failures in Microsoft’s proposal to meet JEDI’s technical requirements, to deviating altogether from DOD’s own evaluation criteria to give a false sense of parity between the two offerors.”

The DOD, which has reportedly operated relatively independently of Trump’s famous whims and tantrums throughout the president’s tenure, issued a statement when the contract was issued that sought to dispel any indications of negative bias affecting the bidding and granting procedure.

“The acquisition process was conducted in accordance with applicable laws and regulations,” DOD noted. “All offerors were treated fairly and evaluated consistently with the solicitation’s stated evaluation criteria.”

Bezos is no doubt used to getting what he wants, so Amazon’s attorneys sued.

Earlier this month, the internet giant upped the ante in their legal action by filing a request to depose Trump about the JEDI contract.

Per that latest filing, Amazon’s attorneys are attempting to get Trump’s under oath testimony in order to gauge his “involvement in any aspect of the JEDI program, contract solicitation, and/or award,” as well as any instances of Trump discusssing “AWS, Amazon.com, Inc. (“Amazon”), Jeffrey P. Bezos, and/or the Washington Post.”

Microsoft was slated to begin work on the massive, 10-year-long project next month. But Judge Campbell-Smith’s order puts the kibosh on that planned work until the Bezos-Trump spat reaches a conclusion–a messy prospect that will include and likely place great strain on DOD and Microsoft as well.

As for how the Pentagon is handling the news? They’re mostly keeping mum.

“We are aware of the injunction but do not have a statement at this time,” Lt. Col. Robert Carver told the New York Times.