Jan. 6 Investigation Is ‘Not Constrained’ to Capitol Rioters, and ‘All Investigative Techniques’ Are Being Pursued, AG Garland Tells Senate 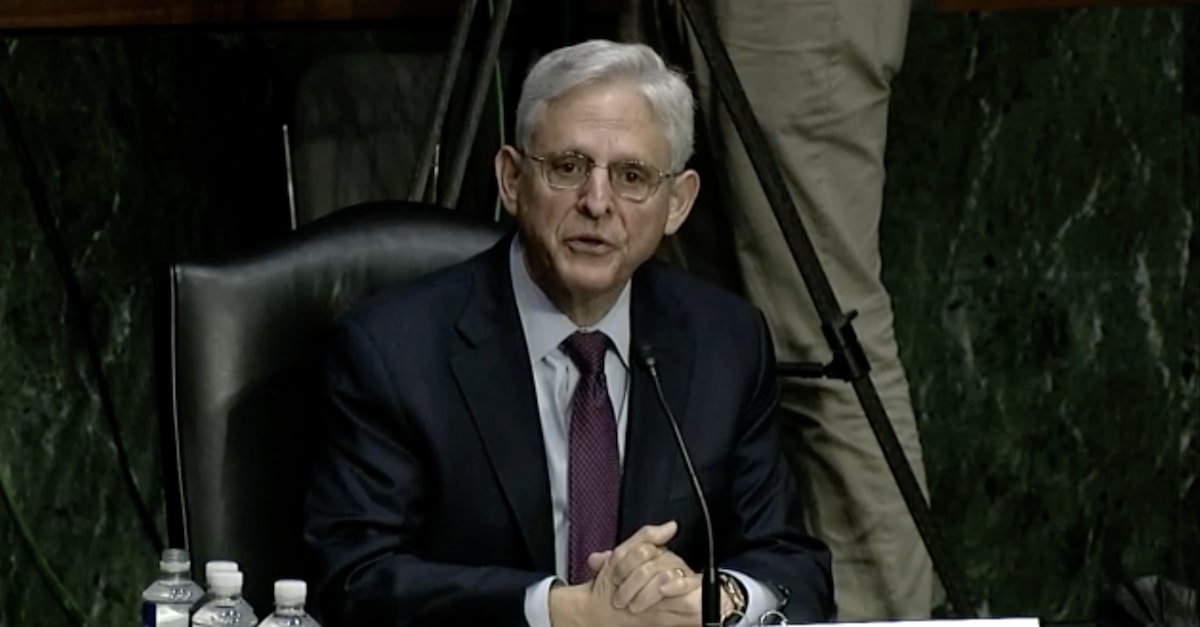 More than nine months after Jan. 6, the Department of Justice has opened more than 650 cases prosecuting those who allegedly participated in the attack on the U.S. Capitol, but none of those cases to date has targeted those accused of financially supporting the siege without entering the building. Pressed on news reports about suspected financial underwriters, Attorney General Merrick Garland told senators on Wednesday that he has “not constrained” his probe in any way, and his prosecutors will pursue “all investigative techniques”—including the old adage about following the money.

Garland’s remark fell during the early stages of the Senate Judiciary Committee’s debut oversight hearing for the Justice Department, once an annual tradition that the Donald Trump administration suspended after Oct. 18, 2017.

The attorney general faced grilling on a number of topics, including the Justice Department’s ongoing review of the FBI’s bungled Larry Nassar investigation, Supreme Court rulings chipping away at the Voting Rights Act, threats of violence at school board meetings, and the Jan. 6 investigation.

Sen. Sheldon Whitehouse , who has frequently used his Judiciary Committee platform to criticize dark money’s effect upon the judiciary, asked Garland about the money “sloshing around in the background” of Jan. 6. The Rhode Island Democrat cited spending by the Bradley Foundation, Turning Point USA and other entities featured in the New Yorker investigation “The Big Money Behind the Big Lie,” by investigative reporter Jane Mayer.

A former federal prosecutor, Whitehouse noted that Garland may not be able to discuss ongoing investigation but urged him to confirm that his prosecutors would chase the money trail.

“Please tell me it has not been constrained only to people in the Capitol,” the senator said.

“The investigation is being conducted by the prosecutors in the U.S. Attorney’s Office and by the FBI field office,” Garland responded. “We have not constrained them in any way.”

“And the old doctrine of follow the money, which is a well established principle of prosecution is alive and well,” Whitehouse continued.

“It’s fair to say that all investigative techniques of which you’re familiar—and some may be that you’re not familiar with because they post-date your time—are all being pursued in this manner,” the attorney general responded.

Before assuming office in 2007, Whitehouse served as both state and federal prosecutor—first as a U.S. Attorney appointed by Bill Clinton between 1993 and 1998 and then as an elected state attorney general between 1998 and 2000.

Later in the hearing, Sen. Alex Padilla (D-Calif.) asked whether the Justice Department would look into alleged involvement by public officials in Jan. 6. Garland noted that the inspector general is looking into this matter.

“I have full confidence that he will advise me and the Department of what he finds,” Garland said. “I know that we will then take appropriate action.”

As the committee’s Chair Dick Durbin (D-Ill.) noted in his introductory remarks, the last time the Justice Department had such Senate scrutiny was on Oct. 18, 2017. The Trump administration then suspended what had once been an annual tradition, the senator noted.

Praising Garland for his transparency, Durbin said: “The department cooperated with our committee’s investigation into the Jeffrey Clark scheme, and it deserves credit for doing so.”

A former acting assistant attorney general, Clark was a key figure in the committee’s recent report “Subverting Justice: How the Former President and His Allies Pressured DOJ to Overturn the Election.” The Democratic-controlled majority referred to Clark as “Trump’s Big Lie Lawyer” in the announcement of its findings, which referred the lawyer to the D.C. Bar for possible disciplinary proceedings.

Republicans of the Judiciary Committee—including Ted Cruz of Texas, Josh Hawley of Missouri, and Marsha Blackburn of Tennessee—repeatedly accused Garland of chilling parents by issuing a memo calling for federal coordination with local law enforcement to address the “disturbing spike in harassment, intimidation, and threats of violence” against school boards.

The memo, which is less than 300 words, does not contain the words “parent” or “parents.”