‘It’s So Painful for Me’: Family of Seven Found Dead in Minnesota Home 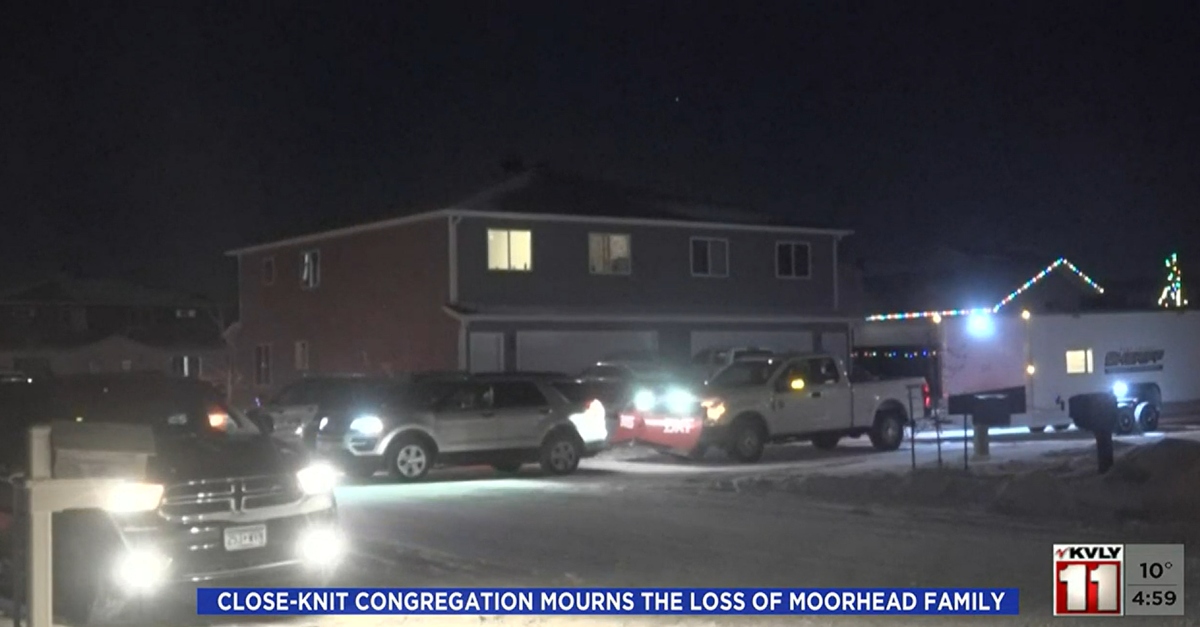 Update – Dec. 22, 6:56 p.m.: Blood tests showed that the family had lethal levels of carbon monoxide in their systems, police announced. Cops are still trying to figure out the source, however. Testing is pending for hydrogen cyanide.

From the Moorhead Police Department:

The investigation has found two known sources that produce carbon monoxide. The first is the furnace at the residence, located in a separate room inside the garage area and has an exterior air intake for fresh air. Detectives have worked with the State Fire Marshal and an HVAC professional and could not duplicate a furnace malfunction whereby carbon monoxide was entering the home. The second source of carbon monoxide is a Kia van, located in the garage, that had some mechanical issues related to the battery. The vehicle was found with a dead battery and a half-full gas tank. There is no indication it was being worked on, such as tools, jumper cables, or a battery jump starter. Detectives had the car checked by a mechanic, the alternator was functioning correctly, but the battery needed to be charged.

Further testing from victim blood samples is being conducted at a qualified separate lab to determine if there is a presence of hydrogen cyanide which originates from the exhaust of a motor vehicle. This lab test result may take up to eight weeks for results. Once those lab results are finalized, we will move closer to defining the cause of the poisoning.

The last building inspection of the home was in September of 2020, and no issues were found with the installed detectors. Detectives found a carbon monoxide detector in a laundry room cabinet detached from the wall and its battery removed. The sensors currently mounted in the home were smoke-only detection devices.

The investigation is still active; however, this information should provide more answers for the cause of this tragic situation.

A family of seven was mysteriously found dead in their home over the weekend, with cops saying there was no obvious trauma discovered in preliminary autopsies. Blood tests are pending. Officers with the Moorhead Police Department in Minnesota identified the family on Monday as:

“The preliminary autopsy has ruled out any obvious trauma as the cause of death,” officers said. “However, the blood samples from the victims have been transported to a lab for further investigatory examination, and we do not have any timeline on those results.”

According to cops, family members checked in on the residence at 4403 13 Street South on Saturday and found the seven dead. Family members called 911. Police and fire officials responded.

“There are no signs of violence or forced entry,” officers said in their initial post.

Pastor Eric Bravo Mejia told KVLY he was among the first people to find the family dead. He was at church Saturday night when he got a call, and he and several members of the church rushed over to the home several blocks away.

He said he saw the family dead, with niece Pinto and the uncle Eldor Hernandez, who is Belin’s brother, in another room.

“I went to the floor above and I entered into the room and all the family was together,” he said in a heart-wrenching interview translated from Spanish. “They were there dead. And I went to another room and there was the niece dead. And the uncle. Also dead. All dead. It was an impact that at this moment I can’t even understand. It’s something you can’t even explain the impact it has in seeing them all there.”

Belin and Marleny were the parents of Marbely, Mike, and Breylin.

“They always tried to be very united together,” he said. “My heart hurts because I love them so much. It’s so painful for me. They were a family. A family well loved.”

Monday would have been Belin’s and Marleny’s 17th wedding anniversary, family told KVLY.

Monday would have marked Belin Hernandez and Marleny Pinto’s 17th wedding anniversary. “For me, it’s a big hit because I don’t have an explanation. I feel that I don’t know how I’m going to get over it.” https://t.co/jq2My8GjqK

The family had moved from Honduras to Minnesota in 2013, Marleny’s brother Wilfredo Pinto told the outlet. He said he could not begin to describe the pain of losing so many loved ones.