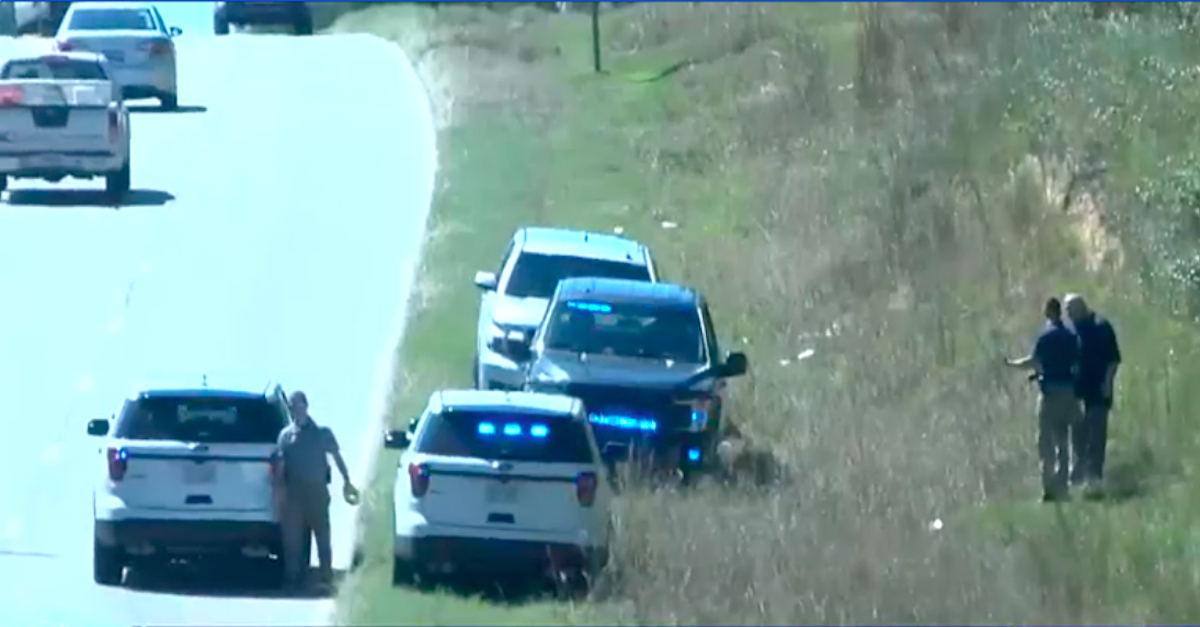 Police investigate woods across from home where Jessica Martin’s ex-husband allegedly killed himself after committing a triple-murder.

The family of a pregnant woman in Alabama who was one of the victims gunned down by her ex-husband in a triple murder-suicide on Friday spoke out about their loved one’s death, revealing new details about the tragic incident and those involved.

As previously reported by Law&Crime, the Phenix City Police Department confirmed that Jeffery Lynn Martin, 47, fatally shot his ex-wife, 35-year-old Jessica Martin, and her boyfriend, 40-year-old Richard Cook, at a home located at the 3700 block of Misty Lane. Jessica’s unborn child also died as a result of the shooting.

While police have not released any additional details concerning their investigation, members of Jessica Martin’s family spoke to local ABC affiliate WTVM-TV about what they had learned of the horrific slayings. Several relatives told the station that Jessica and Jeffery’s 14-year-old son was in the house and witnessed everything when his father came in and started shooting.

Jessica’s uncle, Terry Moore, who is also called Uncle Bubba, said he spoke to the boy shortly after the shooting and learned grisly particulars about his niece and her boyfriend in their final moments.

“I just want to say, Richard really went out like a real man for his family. He stood his ground, and when that man [Jeffery Martin] came in his house, Richard stood there with a baseball bat against a gun, and he died protecting his wife and unborn child,” Moore told the station. “When I came up in the driveway, [Martin’s son] came up running to me saying, ‘Uncle Bubba, Richard’s dead, my dad shot him in the head.’ He went in there and said, ‘my mom is gurgling.’”

The boy’s story, as told by Moore, is consistent with what police said happened at the house. First responders found Cook dead at the scene from what appeared to be multiple gunshot wounds; Jessica was discovered alive but critically injured. She was transported to Piedmont Columbus Regional Midtown Hospital where she and her unborn child were pronounced dead.

Several witnesses in the area reported hearing the gunshots and then seeing Jeffery Martin flee into a wooded area where deputies with the Russell County Sheriff’s Department and agents with Alabama Law Enforcement Agency (ALEA) found him dead from an apparent self-inflicted gunshot wound.

Investigators declined to speculate about Jeffery Martin’s possible motive for killing Jessica and Richard, but Moore said the man had recently tried to re-insert himself into Jessica’s life after not being heard from in more than a decade.

According to Moore, Jeffery Martin had been harassing Jessica and actually threatened her the day before he killer her and Cook. Moore also told the station that Jeffery Martin was “camping out across the street from [Jessica’s] house stalking her,” even after she had called the police to report him.

“She called the police, they made a report, and nobody knew he was across the street. So she came to my house and she went to another friend’s house,” said Moore. “They got here, they wasn’t here 30 minutes, and he came up and waited on them to get here, and he was saying I just want to see my son, then he did what he did in front of his son.”

The grieving family member added that he believed Martin’s son was “going to need a lot of counseling.”

Samantha Autry, Jessica’s younger sister, called her elder sibling the “glue” of the family and said she was just six weeks shy of her due date.

“Jeffery Martin was someone who should have stayed in the past, he was long gone, and that’s all I have to say about that,” Autry said.

Jessica’s family is accepting donations for the funeral arrangements which can be placed though their GoFundMe campaign.

The Phenix Police Department said it is continuing to investigate the murder-suicide and asked that anyone with information related to the investigation to please contact PCPD at 334-298-0611 or 334-448-2825.