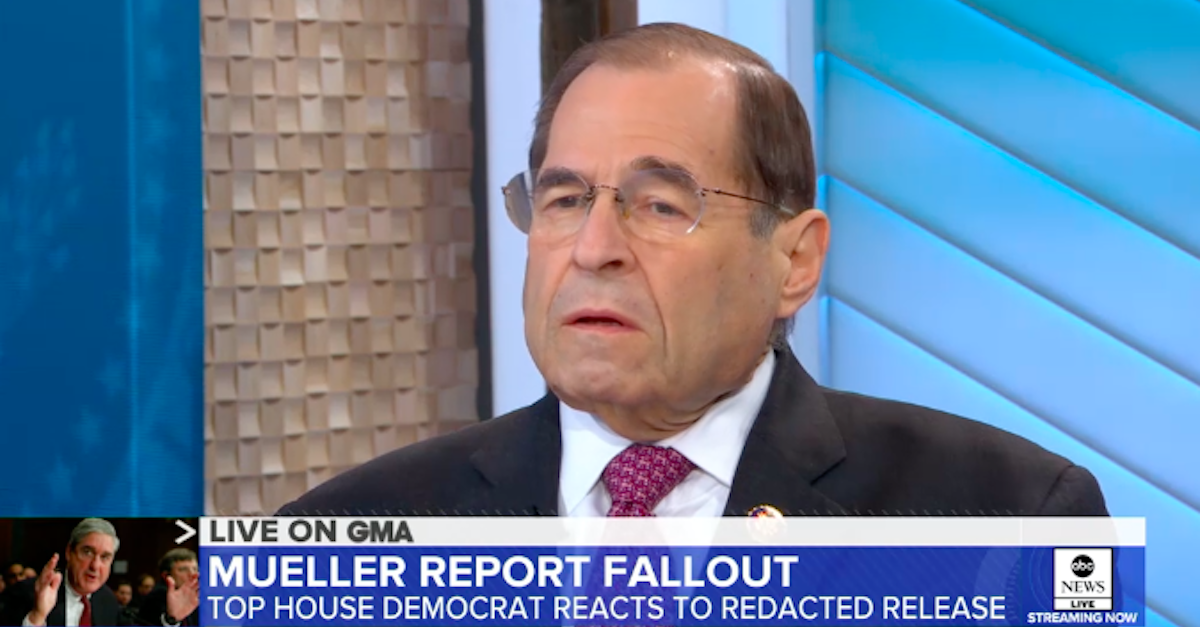 President Donald Trump‘s White House counsel Pat Cipollone sent a letter to House Judiciary Committee Chairman Rep. Jerry Nadler (D-N.Y.) detailing the “principal legal flaws” in the Committee’s numerous March 4 demands. The letter lays out the four legal arguments for why it is rejecting all of the Committee’s requests in its broad obstruction probe.

The White House did not assert executive privilege for the initial Mueller report, but the letter states that the Committee’s requests violate the four components of executive privilege: confidential communication between Trump and his advisors; discussions between executive branch officials; information that comes from law enforcement investigations and the president’s communications with foreign leaders.

In a statement released Wednesday by Nadler, he suggests the Trump Administration is using executive privilege as a blanket attempt to obstruct congressional oversight and is not “reviewing these documents on a good-faith basis to determine which ones, if any, are legitimately subject to privilege.”

Cipollone wrote that the information requested is exclusive to the executive branch under the Constitution and it is “traditionally deemed beyond the reach of congressional oversight.”

The third rationale is that the Judiciary Committee’s inquiry is purely political and it has no “legitimate legislative purpose” to its inquiries into the Muller Report and is conducting “a pseudo law enforcement investigation” that is “outside the constitutional authority of the legislative branch.” But the Department of Justice wrote a memo in 2000 that states Congress can look into “serious wrongdoing” by a president “through its own investigatory powers.”

Trump's lawyers are making an audacious claim that Congress can't investigate him.

BUT, in its 2000 memo explaining why it couldn't indict a sitting prez, DOJ mentions Congress's "investigatory powers" as a remedy.https://t.co/8D8iAD9Abd pic.twitter.com/VttXxSDBsZ

Last but not least, Cipollone said that Congress is just trying to interfere with the president:

Finally, when the requests are evaluated in light of these cumulative defects showing no regard for the legitimate interests of the Executive Branch—combined with the sweeping scope of the requests—it becomes apparent that they bear no relation to any articulated goal of legitimate congressional oversight. Instead, they amount to little more than an unprecedented effort to interfere with the President’s ability to perform his constitutional duties.

Cipollone did not stop there.

“Congressional investigations are intended to obtain information to aid in evaluating potential legislation, not to harass political opponents or to pursue an unauthorized ‘do-over’ of exhaustive law enforcement investigations conducted by the Department of Justice,” Cipollone concluded. “Unfortunately, it appears that you have already decided to press ahead with a duplicative investigation, including by issuing subpoenas, to re-plow the same ground the Special Counsel has already covered.”

Harvard Law professor Laurence Tribe, for one, did not mince words in his analysis of the letter.

This is a denial of the House's constitutional power of impeachment. The Executive Branch cannot deny the House the power to investigate criminal wrongdoing by the president simply by conducting its own investigation first. https://t.co/8a4gAxSwJQ

After the letter was released to the public, Nadler said that the White House is acting like the president is a king.

"This is the White House claiming that the President is a king. … No president, no person in the United States is above the law," House Judiciary Chairman Jerry Nadler responds to the White House rejecting his request for documents https://t.co/ec2onkAmDP pic.twitter.com/jQrttxgNNl