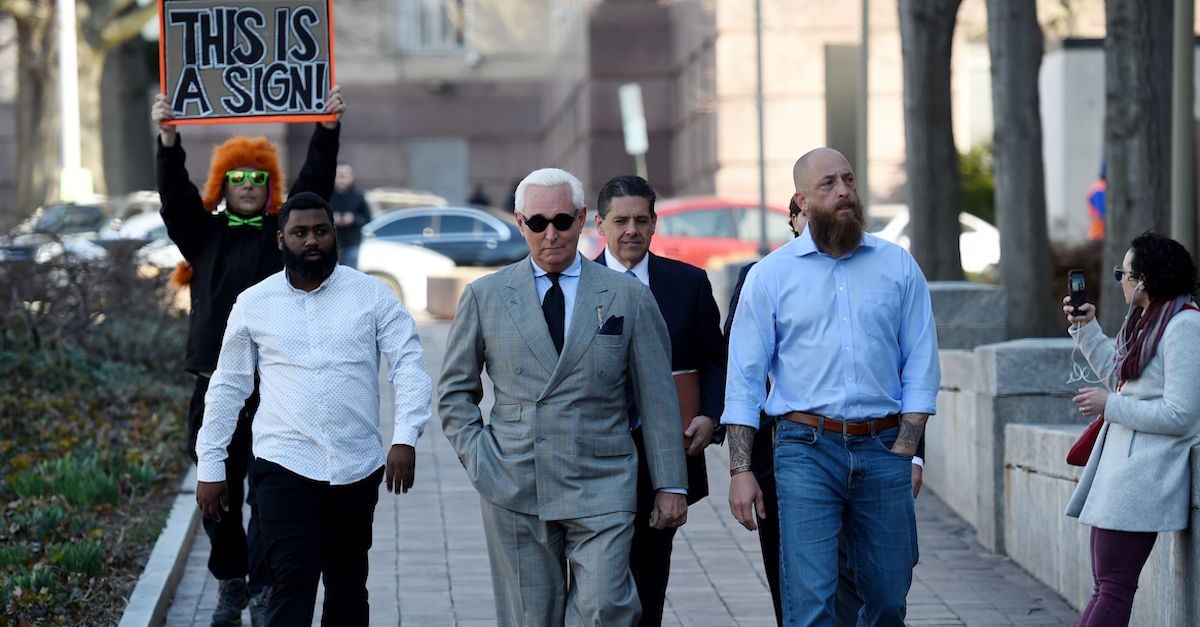 Embattled Trump ally Roger Stone and his legal team were lambasted by a federal judge Tuesday afternoon after filing a mistake-laden motion with the court on May 10.

U.S. District Judge Amy Berman Jackson noted in the docketed order that Stone’s motion to suppress evidence included an incomplete list of the search warrants being challenged which were not marked with exhibit numbers and were provided in an order that “did not correspond to what was actually provided.”

Jackson specifically highlighted that Stone’s attorney provided only two of the three warrants they were directly seeking to challenge, completely failing to provide a copy of the warrant or accompanying application relating to the search of Stone’s Florida home. Jackson gave Stone’s attorney until Thursday to provide copies of the warrants and their applications to the court if he intends to pursue his challenge.

This was the order in its entirety:

MINUTE ORDER as to ROGER J. STONE, JR. On May 10, 2019, defendant filed a motion to suppress “all evidence as fruit of illegal search warrants executed on specified dates and times.” Def.’s Mot. to Suppress 100 at 1. The motion does not specify which warrants defendant maintains were “illegal,” but it notes that the “warrants and applications are filed under seal.” The Court notes that defendant’s Search Warrant Exhibit, Dkt. 101 (sealed), purports to be a list of the search warrants attached to the motion, but the list lacks exhibit numbers, and the order of the items listed does not correspond to what was actually provided. For instance, the first item on the list indicates that one of the warrants included in the motion was a warrant for the search of defendant’s former home issued by the U.S. District Court for the Southern District of Florida, but neither that warrant nor the application has been supplied to the Court. Also, the Search Warrant Exhibit lists warrants issued by the U.S. District Court for the District of Columbia on August 3, 2018 to three recipients, but only two warrants issued on that date were submitted to the Court (with one of them being filed twice). Finally, a search warrant issued by U.S. District Court for the District of Columbia on August 8, 2018 was filed with the Court but not listed on the Search Warrant Exhibit. Therefore, it is ORDERED that the defendant must inform the Court by May 16, 2019 if the search of defendant’s former home and the August 3, 2018 warrant issued to the third recipient were meant to be included in this motion, and if so, he must provide the Court with copies of the warrants and applications. On the same date, defendant must also provide the Court with a corrected version of the Search Warrant Exhibit, listing the warrants covered by the motion and assigning each an exhibit number in the numerical order it was filed on the docket. Signed by Judge Amy Berman Jackson on 5/14/19.

Stone, the longtime GOP stalwart, was likely already treading on thin ice with Judge Jackson stemming from a February incident in which Stone posted an image on Instagram featuring the federal judge’s face and crosshairs near her head.

In the post, Stone referred to Jackson as an “Obama appointed Judge who dismissed the Benghazi charges against Hilary Clinton and incarcerated Paul Manafort prior to his conviction for any crime.”

Stone later apologized for the post, claiming that he had no intention of disrespecting the court and that the crosshair-photo was just “a random photo taken from the internet.” He followed with another post to Instagram saying the idea that he was intending to threaten Judge Jackson was “categorically false,” and stating that the picture had been “misinterpreted.”

Law&Crime previously reported that the image had appeared on transparently pro-Russia websites.

Jackson placed a partial gag order on Stone and his lawyers in January, restricting Stone from speaking about the case on the courthouse steps and barring his lawyers from discussing the case in the media in an effort to prevent the influencing of potential jurors.

Stone has pleaded not guilty to charges of lying to Congress, witness tampering, and obstruction stemming from the special counsel’s investigation into Russian election interference.

In his motion to suppress, Stone claims that the government lacked probable cause for the search warrants due to their reliance on “assumptions” that Russian officials were behind the hack and release of DNC emails. The motion is accompanied by two declarations purporting to offer expert testimony from cyber security analysts claiming that based on “forensic fingerprint” analysis, WikiLeaks could not have received the hacked emails from Russian officials.