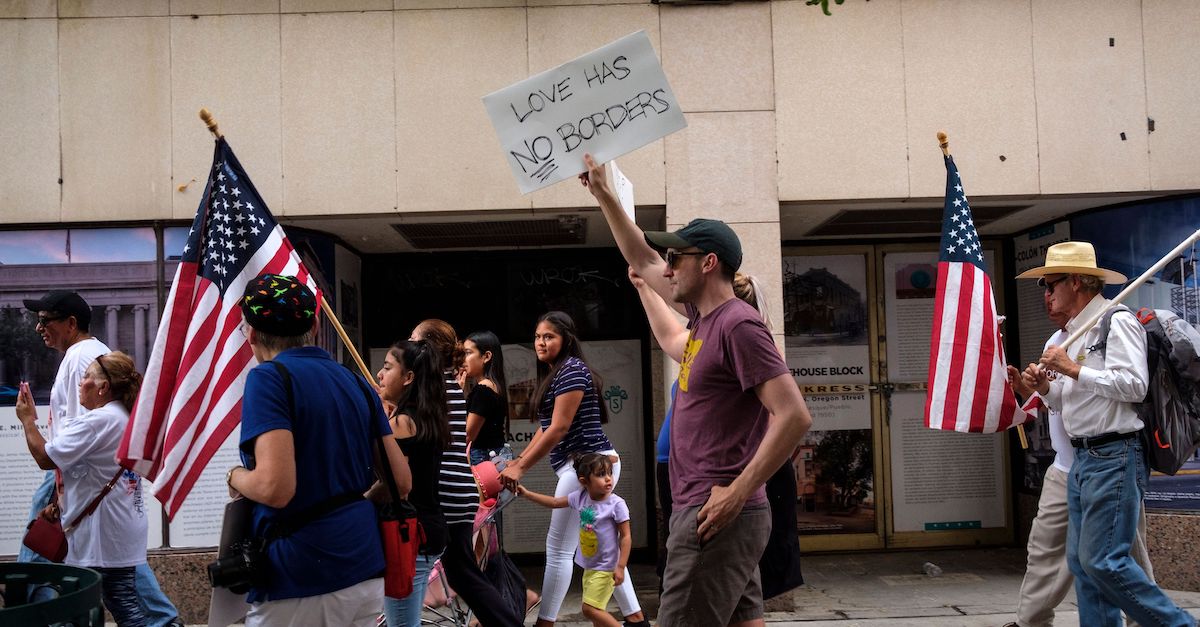 Following a massive raid by U.S. Immigration and Customs Enforcement (ICE) in Mississippi, many children have been left temporarily homeless.

Many were left in their schools or homes following the series of raids on Wednesday. According to ICE, the raids were conducted at “seven agricultural processing plants across Mississippi,” and more than 600 agents were involved in the apprehension of almost 700 undocumented immigrants. Several of these plants are owned by major agricultural firms, such as Peco Foods Inc. and Koch Foods Inc.

Children left behind in Forest, Mississippi reportedly had to be taken in by neighbors and community leaders, who gathered them together in the town’s community center. Many of the children were in tears. While talking to CBS 12, Magdalena Gomez Gregorio, 11, cried for her parents to be set free.

“Government please show some heart,” she begged. “Let my parents be free. I need my dad and mommy. My dad didn’t do anything. He’s not a criminal.”

Christina Peralta, a godmother to two children whose mother was arrested, claimed that “A lot of people [who’ve been arrested] have no record [and have] been here for 10-12 years.”

In the wake of the Trump-sanctioned raid, community leaders, such as Clear Creek Boot Camp owner Jordan Barnes, have offered children places to sleep and have donated food during their time of need. Barnes also ensured that if children “need transportation to school” it will be taken care of.

To many, the raids feel like an attack on an already marginalized community.

“Today’s raids are part of the ongoing war against immigrant families and the communities in which they live,” Julia Solórzano, an attorney with the Southern Poverty Law Center told NPR. “It is especially sickening that days after immigrants were targeted by a gunman in El Paso, Texas, workers at plants across Mississippi witnessed armed agents descending on their workplace.”

Solórzano suggests the optics surrounding these raids are terrible, especially with many in Congress openly supporting the opening of an impeachment inquiry of President Donald Trump. Furthermore, they come directly after the El Paso gunman is believed to have cited the anti-immigration screed The Great Replacement, a piece of far-right, French theory that alleges non-white immigrants will replace the natives of Europe.

As of Thursday, many family members of those arrested still don’t know whether their parents, spouses, or relatives are coming home or headed to immigration detention facilities. Some have been released, but according to ICE spokesman Bryan Cox, some are still being processed.  Cox assured CNN that “any suggestion that all persons are going to be detained is not correct.”

“I recognize that ICE comes under the Department of Homeland Security, and this is an order of the United States. There’s nothing I don’t think anybody can do about it,” said Canton Mayor William Truly Jr. “But my main concern is now, what happens to the children?”

In response, ICE Acting Director Matt Albence told reporters that some parents would be released but forced to wear GPS ankle monitors for the duration of their immigration proceedings. Albence then compared the Wednesday raid to any other arrest, claiming that when someone is arrested “and that individual is a parent, that individual is going to go to jail, and that child’s going to be left alone or with a family member.”

Observers of the situation believe ICE’s indelicate handling of the detainees’ families was meant to scare immigrant communities. Democracy Now believes the raids may have targeted food processing companies which recently lost retaliation lawsuits against Latino workers. Some labor organizers have even suggested that ICE raids are being used as a means of union-busting.  But the federal prosecutor who is handling the cases defended what occurred.  “Today, through the hard work of these men and women, we are once again becoming a nation of laws,” U.S. Attorney for the Southern District of Mississippi Mike Hurst said on Wednesday following the raids.