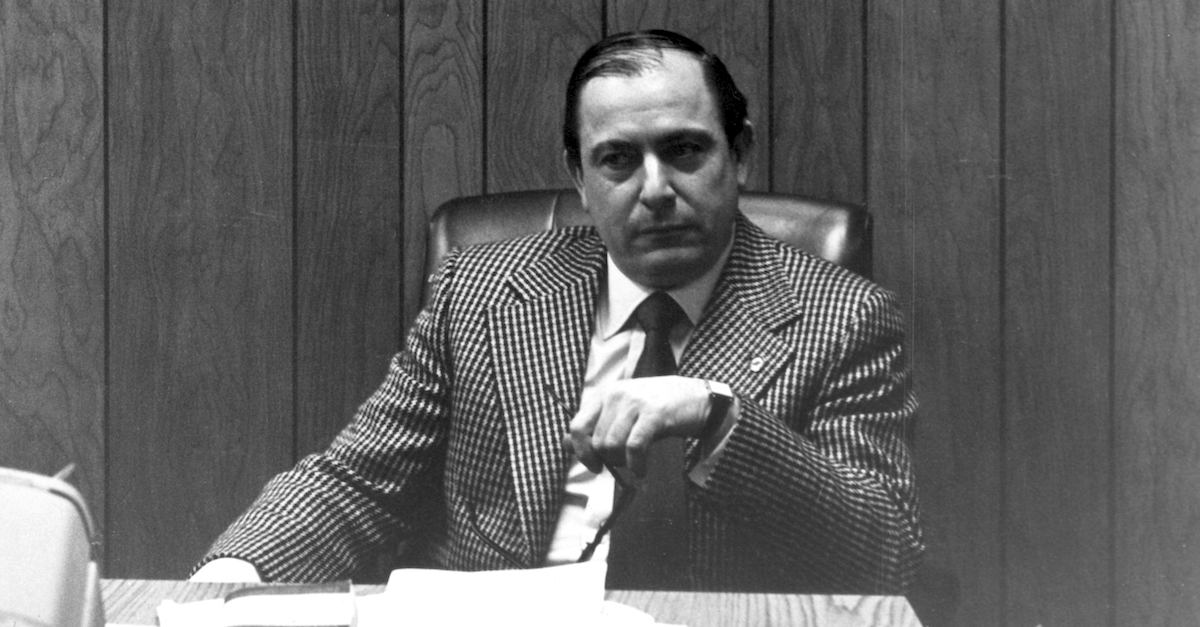 Former American organized crime boss Joseph Colombo (1914 – 1978) sits at his desk in New York City in a 1971 file photo. He was the patriarch of the Colombo organized crime syndicate.

A grand jury indictment unsealed on Tuesday charges 14 individual defendants — among them “the entire leadership structure of the Colombo crime family” — with a litany of crimes.

Bonanno family soldier John Ragano is charged with “loansharking, fraud and drug trafficking offenses,” prosecutors added. But the core defendants are charged with siphoning approximately $10,000 a month away from a labor union’s health plan to help fund organized crime activities. Some of the money came through threats aimed at various union officials and their families and were taken from those officials’ salaries, prosecutors said.

Prosecutors said the Colombo crime family members were engaged “in a long-running effort . . . to infiltrate and take control of a Queens-based labor union . . . and its affiliated health care benefit program . . . that provides medical benefits, including dental, optical and pharmacy benefits, to the members of the Labor Union, and to a conspiracy to commit fraud in connection with workplace safety certifications.”

A request for pretrial detention filed by federal prosecutors lays out some of the case:

Approximately one year ago, law enforcement agents received information that multiple members of the Colombo crime family were extorting a senior official of a Queens, New York based labor union (the “Labor Union”). The government’s investigation has identified that the senior official, who is named as “John Doe #1” in the Indictment, was one of several individuals associated with the Labor Union or its employee welfare benefit fund (the “Health Fund”) who have received threats, pressure and demands from the Racketeering Defendants.

Between August 2020 and March 2021, the government intercepted telephone communications, pursuant to judicially authorized wiretaps, for telephones used by Racketeering Defendants DiMatteo, Persico, Ferrara, Vincent Ricciardo, Uvino and Domenick Ricciardo. The interceptions revealed, among other things, that the senior leadership of the Colombo crime family, including boss Andrew Russo was intimately involved in directing the extortion of the Labor Union, Health Fund and their employees and consultants.

Thirteen of the defendants were rounded up in New York and New Jersey on Tuesday. One, Vincent Ricciardo, was caught in North Carolina. DiMatteo has not been arrested and “remains at large,” prosecutors said.

“Today’s charges describe a long-standing, ruthless pattern by the administration of the Colombo crime family, its captains, members and associates, of conspiring to exert control over the management of a labor union by threatening to inflict bodily harm on one of its senior officials and devising a scheme to divert and launder vendor contract funds from its health care benefit program,” said Acting U.S. Attorney for the Eastern District of New York Jacquelyn M. Kasulis said. “In addition, for their own enrichment, the defendants conspired to engage in extortionate loansharking, money laundering and fraud, as well as drug trafficking.”

Kasulis said one of her office’s priorities was to “protect[] the independence of labor unions.”

“Everything we allege in this investigation proves history does indeed repeat itself,” said Michael J. Driscoll, the FBI Assistant Director-in-Charge of the New York field office. “The underbelly of the crime families in New York City is alive and well. These soldiers, consiglieres, under bosses, and bosses are obviously not students of history, and don’t seem to comprehend that we’re going to catch them. Regardless of how many times they fill the void we create in their ranks, our FBI Organized Crime Task Force, and our law enforcement partners, are positioned to take them out again, and again.”

Elsewhere, prosecutors alleged that Vincent Ricciardo and Domenick Ricciardo “collected a portion of the salary of a senior official in the Labor Union (“John Doe #1”) by threatening to harm John Doe #1 and his family.”

Again, according to prosecutors:

The defendants each face up to 20 years in prison if convicted. The full list of all fourteen defendants is below.

Costa and Uvino appeared in federal court Tuesday afternoon with their attorneys and pleaded not guilty.

Russo and Bellantoni were arraigned separately. Russo appeared by videoconference from a hospital while under federal guard. It was unclear from the proceeding precisely why he was in a medical facility, but at least one participant on the remote call said the beeping of hospital equipment was bothersome. Russo’s attorney said he would be in the hospital “for some time.”

“I hear you!” Russo said to a federal judge when asked if a remote video connection worked.

“I read it. I did read it, your honor,” Russo said when asked if he received a copy of his indictment.

“Are you prepared to enter a plea of guilty?” the judge asked in an apparent slip of the tongue. “Guilty or not guilty?” she immediately corrected.

Costa, Uvino, and Russo were ordered detained pending trial, but they are being allowed to challenge that decision if they wish.

“Hold on, your honor,” Russo said while asking a question — but the connection cut out.

The judge said Russo would be released from the hospital to a federal detention center where he and his attorney could attempt to prepare a bail application.

“That’s all right, your honor; thank you so much,” Russo said.

Prosecutors had asked that Russo, Costa, Uvino, and seven other defendants not be allowed to be released on bail pending trial.

“Can I get bail?” Russo then questioned — apparently confused about the proceeding. The judge then re-explained that Russo would go to a detention center when he’s released from the hospital where he and his attorney could attempt to challenge his pretrial detention.

Russo said he would do whatever the attorneys and the judge wanted. The judge said she didn’t have a vote in the matter. Russo’s attorney consented to the plan articulated by the court and said the time to challenge the pretrial detention would come sometime later — and after the defense had a chance to receive and to review some of the evidence from prosecutors.

The attorneys and the court spent about ten minutes hashing out whether or not bond would be allowed for Bellantoni.

“I do, your honor,” Bellantoni said when asked if he understood the restrictions imposed — which included no contact with organized crime figures, no contact with the allegedly targeted labor union or its health fund, and restrictions on travel to only the New York City and Long Island areas. A relative agreed to put up property as part of a $100,000 bond. The property had been refinanced pursuant to a mortgage as recently as last month, so there was some haggling over the amount of equity that had built up in the property.

Read some of the case documents below. They delineate the specific charges filed against the specific defendants: