As expected, a lengthy deposition from a Jeffrey Epstein accuser’s 2016 lawsuit against Ghislaine Maxwell is finally here. Maxwell, the former girlfriend and accused madam of the infamous dead sex offender Epstein, currently faces sex trafficking and perjury charges in the Southern District of New York.

The two perjury counts stem from this deposition in the Virginia Roberts Giuffre case. Giuffre has alleged that Epstein and Maxwell trafficked her to powerful men when she was a minor, including Prince Andrew and Alan Dershowitz. Both men have denied ever meeting Giuffre.

The Maxwell deposition document is more than 400 pages. This story will be updated. but you can read the deposition below:

400-plus pages of Ghislaine… by Law&Crime

Q: When did you first recruit a female to work for Mr. Epstein?

A: MR. PAGLIUCA: I object to the form and foundation of the question. I believe this is confidential information. I ask anyone who is not admitted in this case be excused from the room, please.

After he made his objection, a brief controversy followed because Giuffre’s attorney Bradley Edwards was in the room. Maxwell was asked again when she first recruited a female for Epstein. Maxwell responded by saying she was trying to grapple with word female. She supposedly didn’t know what the word means.

Q: Are you a female, is that the sex that you are?

Maxwell: I am a female.

The questioners said that they were not referring to any specific age. Then Maxwell claimed the first female she recruited to work for Epstein was in her 40s or 50s. 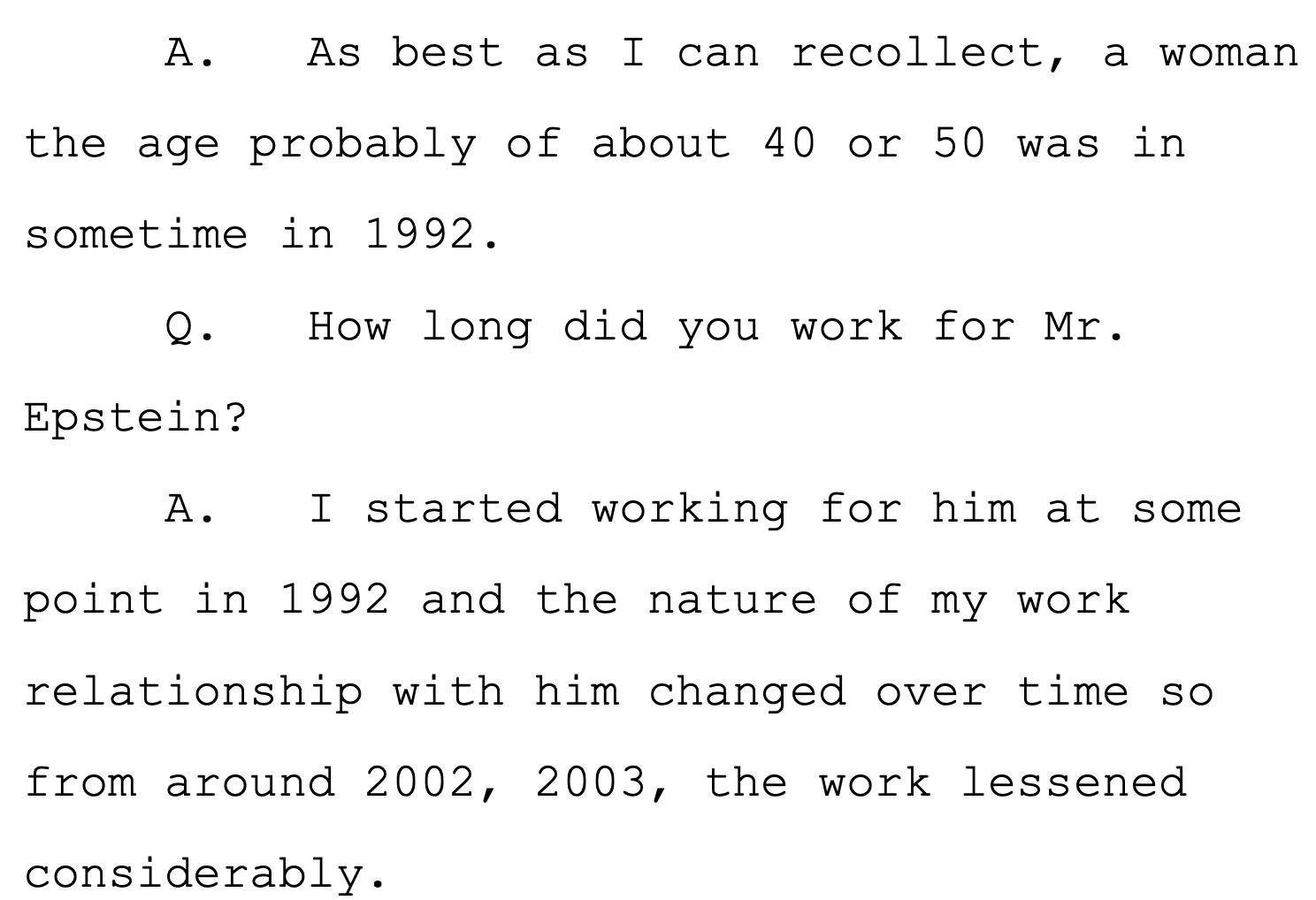 The point in the line of questioning was ultimately to get Maxwell to admit that she invited Giuffre (then Virginia Roberts) when she was a minor to go over to Epstein’s Palm Beach residence. Giuffre has said that she had worked at Donald Trump’s Mar-a-Lago club as a spa attendant when she was approached by Maxwell.

In the deposition, Maxwell kept saying that Giuffre “held herself out” as a masseuse. Maxwell said she did not recall the Mar-a-Lago meeting. An apparently frustrated Giuffre attorney asked Maxwell the question many are probably thinking while reading this: Giuffre just showed up at Epstein’s front door one day? 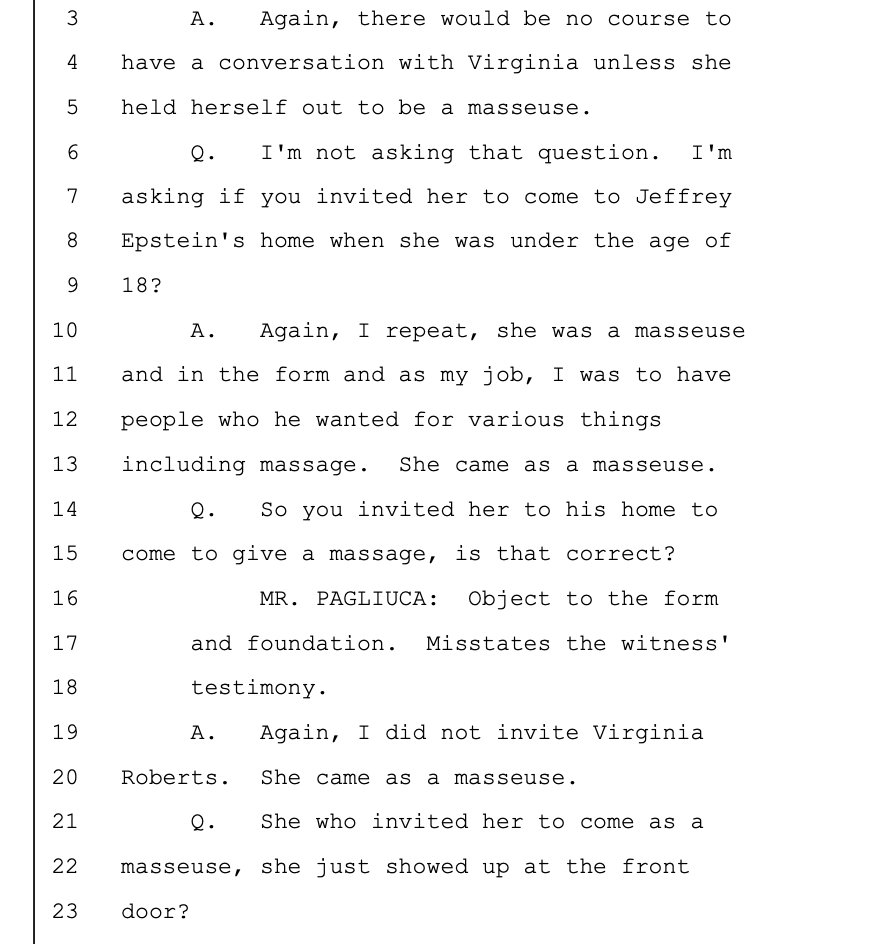 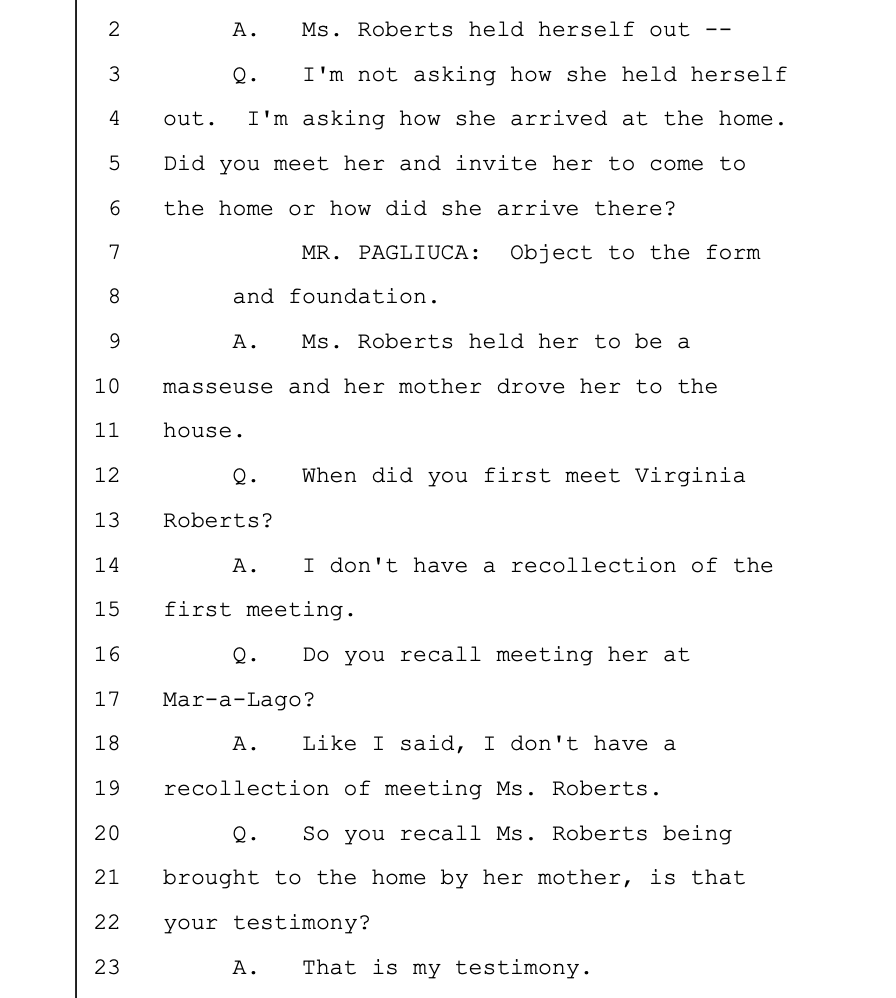 Maxwell said that Giuffre’s mother drove her to Epstein’s mansion. She said she spoke with the woman outside—the “entire time” her daughter was in Epstein’s home! 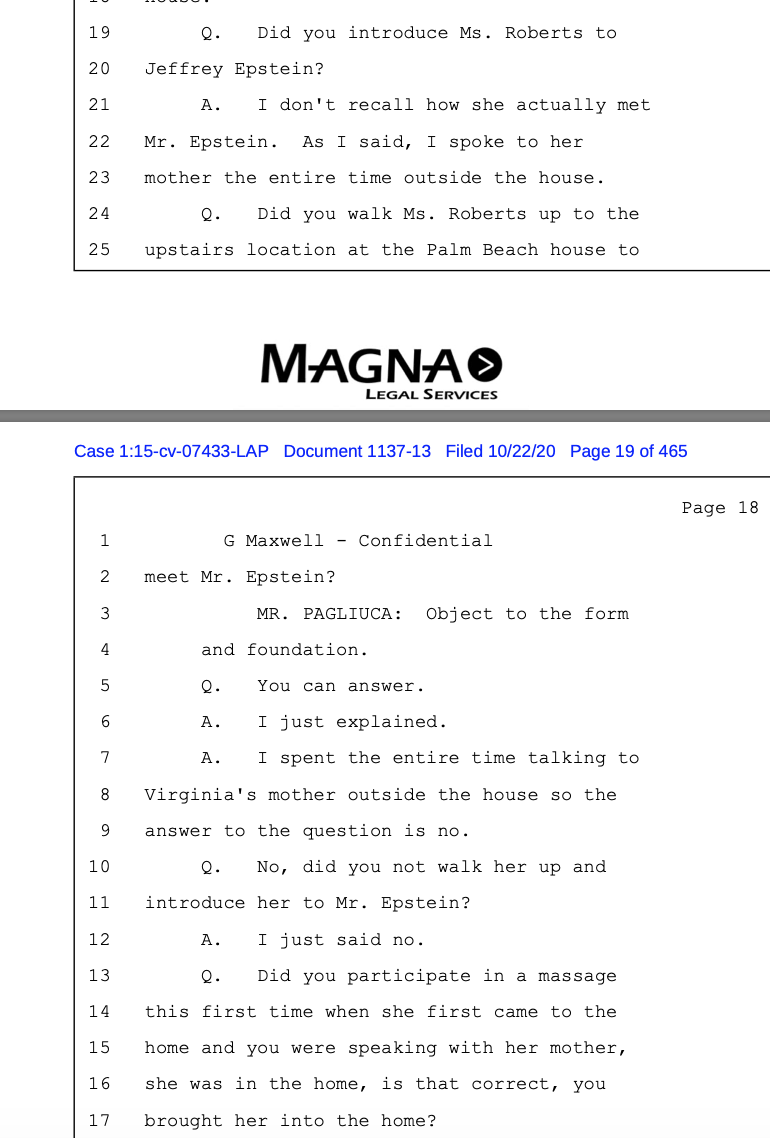 Maxwell went on to say that Virginia “lied 100 percent about absolutely everything that took place in that first meeting.”

“She has lied repeatedly, often and is just an awful fantasist,” Maxwell continued. “So very difficult for anything to take place that she repeated because I was with her mother the entire time.”

Maxwell was asked if she had ever seen females under 18 in Epstein’s home. Maxwell repeatedly said that she has friends who have children. 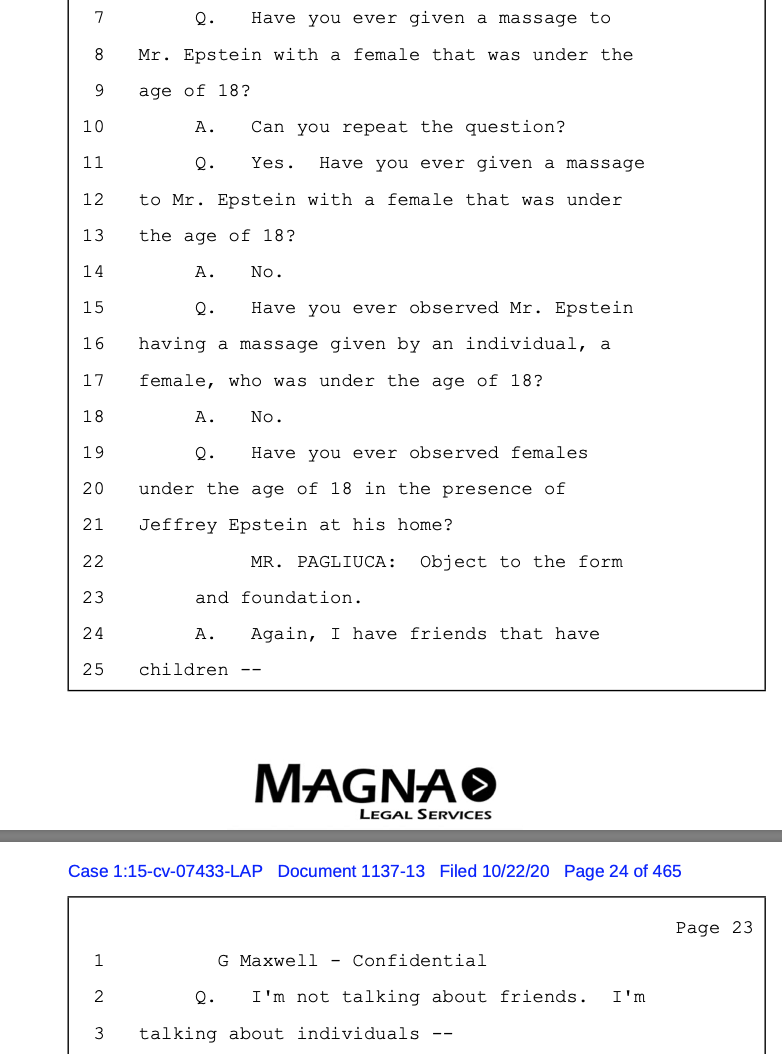 Earlier in the deposition Maxwell had no idea what “female” meant; now she’s saying she didn’t know what was meant by 18 years old and not the child of a friend.

Q: Have you ever observed a female under the age of 18 at Jeffrey Epstein’s home that was not a friend, a child — one of your friend’s children?

Maxwell: Again, I can’t testify to that because I have no idea what you are talking about.

Q. You have no idea what I’m talking about in the sense you never observed a female under the age of 18 at Jeffrey Epstein’s home that was not one of your friend’s children, is that correct?

MR. PAGLIUCA: Object to the form and foundation.

Maxwell: How would I possibly know how [editor’s note: the word “old” appears to be missing from the transcript] someone is when they are at his house. You are asking me to do that. I cannot possibly testify to that. As far as I’m concerned, everyone who came to his house was an adult professional person.

The interrogators moved on to a famous police report, in which a young victim-recruiter said Epstein paid her to find new victims—”the younger the better.” Maxwell said she did not recall hearing Epstein use that phrase. Maxwell said both men and women over the age of 18 gave Epstein massages.

Maxwell, when pressed on whether she had knowledge of minor females in Epstein’s home, explained that she couldn’t give a clear yes or no answer because Epstein’s house was large and she had a busy job. 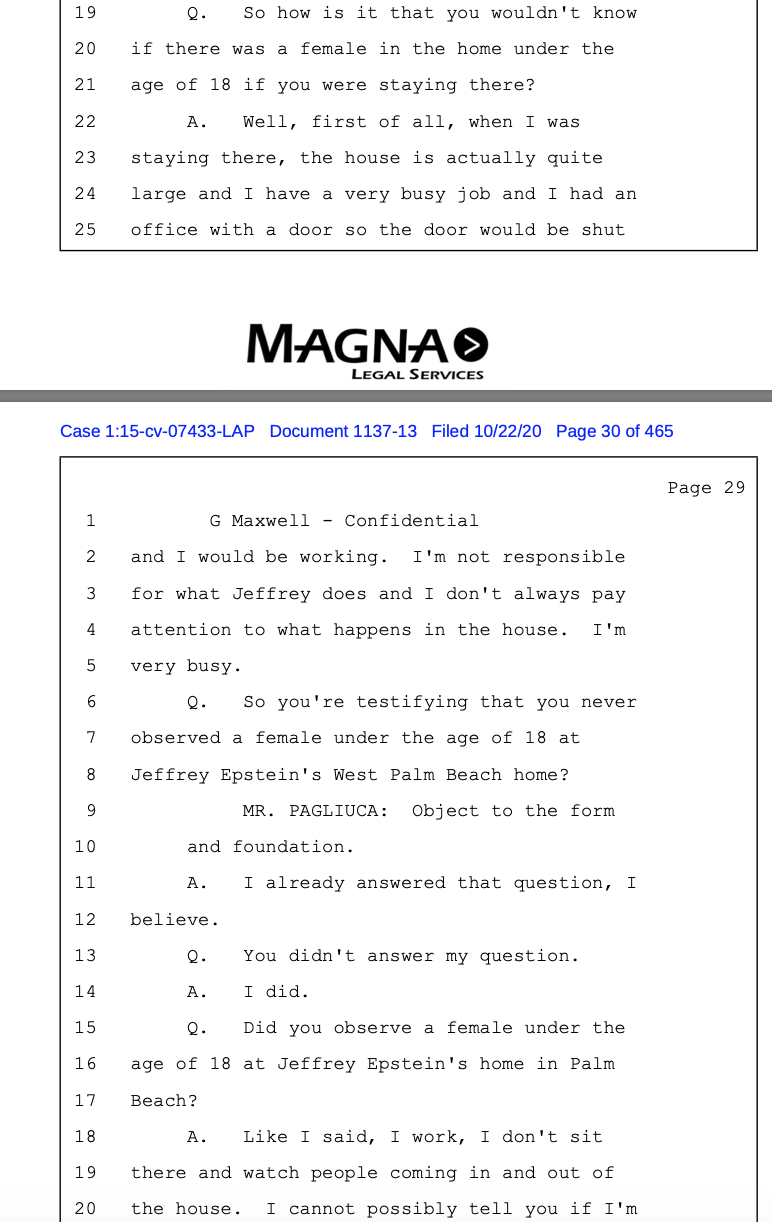 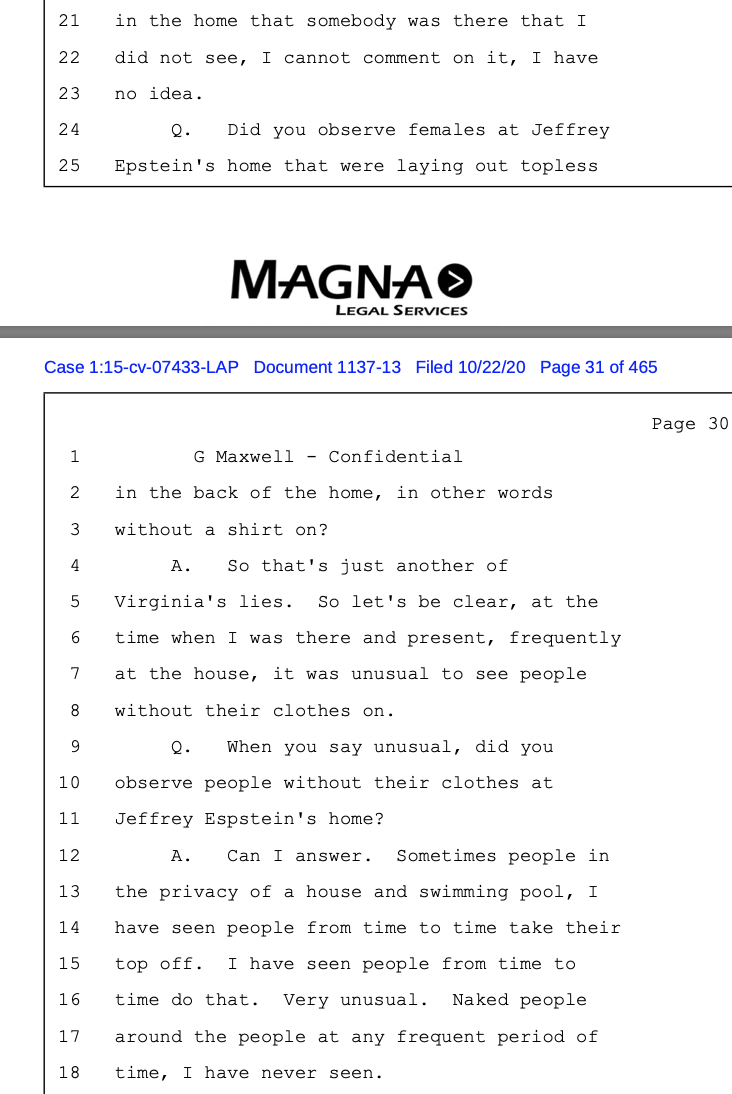 Maxwell called Giuffre a liar again when asked about topless females at Epstein’s home. Then Maxwell said people go topless in a private swimming pool from time to time. She said it was “unusual” to see people without their clothes on at Epstein’s residence. “Unusual” is not “never happened.”

The questioning eventually veered into graphic territory. For example, Maxwell was asked whether she provided Giuffre with a “school girl outfit” to wear during an Epstein massage.

Maxwell said “I have no idea what you are talking about.” The questioner, having already seen Maxwell struggle with the meaning of words like “female” and “18 years old,” wondered if Maxwell knew what “school girl outfit” meant. 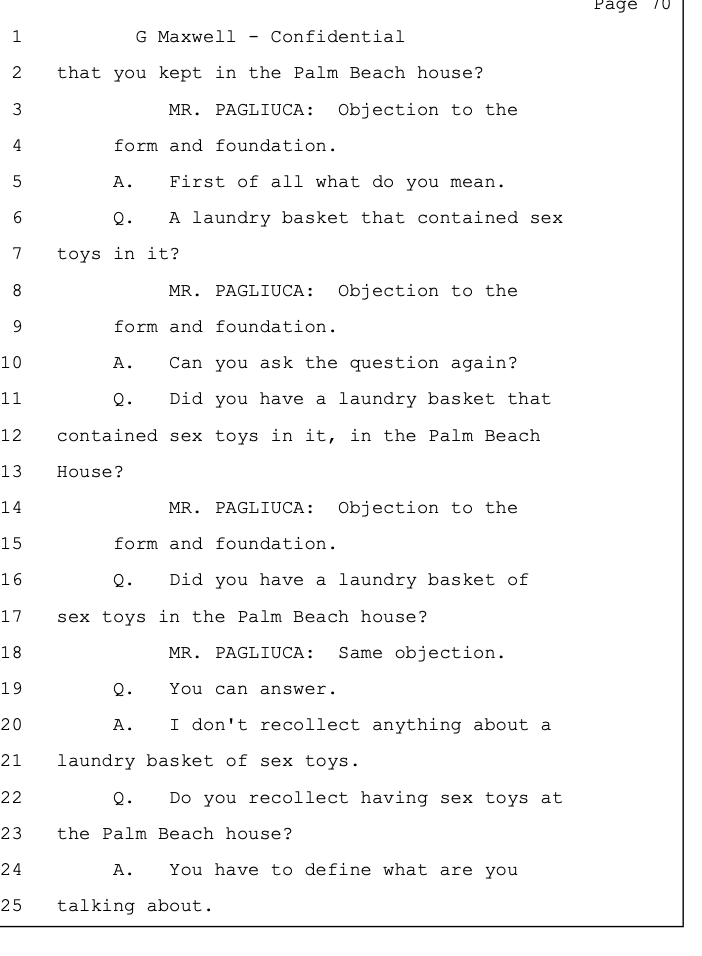 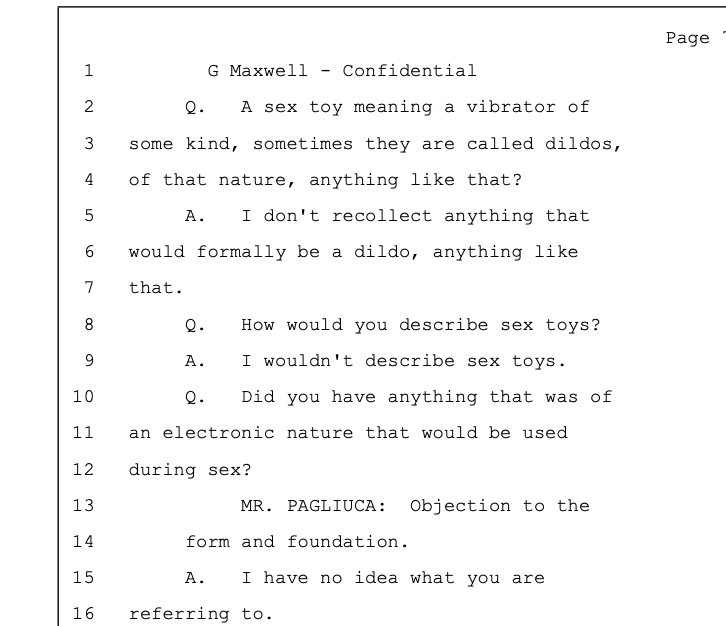 Recall: Prosecutors said in July that Maxwell lied under oath at least two times during. On or around April 22, 2016, Maxwell said “I don’t know what you’re talking about” when asked if Epstein had a scheme to recruit young girls for “sexual massages.”

Maxwell also said she wasn’t aware that she interacted at Epstein’s properties with anyone who was a minor—excerpt for the plaintiff in the civil case who was 17 at the time of the interaction. On or around July 22, 2016, Maxwell said that she did not recall sex toys being present at Epstein’s Palm Beach home. (There were sex toys there.)

Maxwell admitted to having threesomes with a “blond and brunette” but said she “wasn’t aware that [Epstein] was having sexual activities with anyone when I was with him other than myself.” Maxwell was asked if she had ever given someone a massage.

“I have never given anyone a massage,” she answered.

Maxwell went on to say during the deposition that she didn’t recall Epstein and Giuffre “in a massage situation” and “never saw them in a sexual situation.” 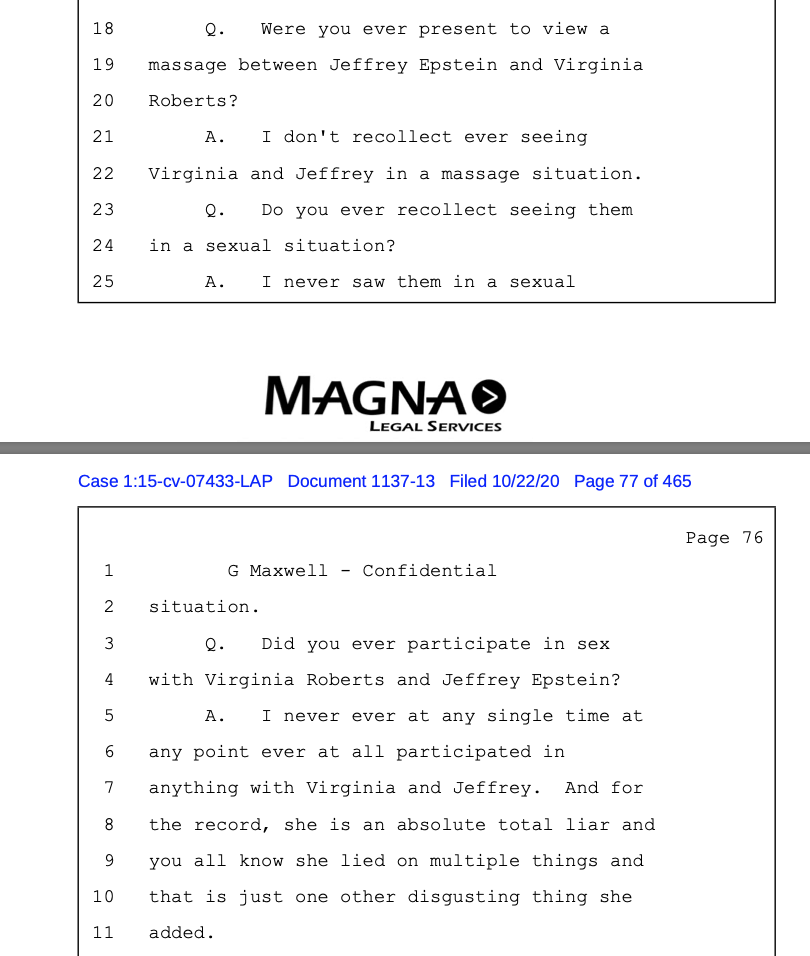 She said, again, that Giuffre was an “absolute total liar.”

“I never ever at any single time at any point ever at all participated in anything with Virginia and Jeffrey,” Maxwell said when asked if she had participated in sex acts with Epstein and Giuffre.

By page 83, Maxwell was asked if it was true that Epstein liked to have his nipples pinched during sexual encounters and/or sexualized massages. Maxwell declined to answer.