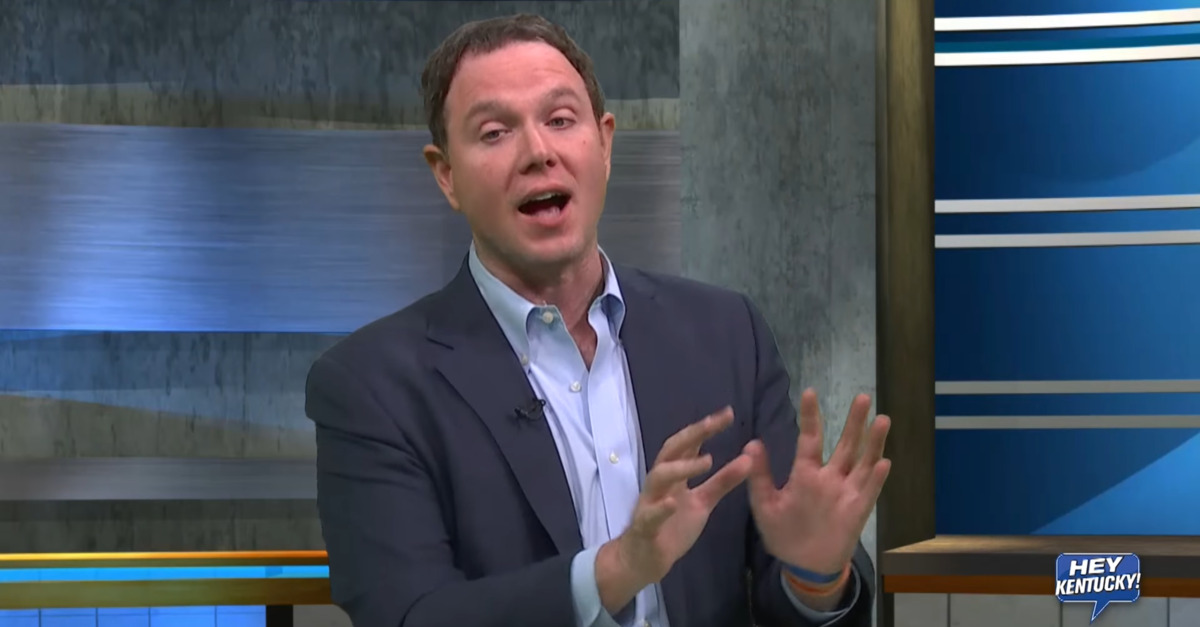 Mitch McConnell (R-Ky.) is the least popular senator among home state voters in the entire country. And he faces increasingly steep re-election odds against newly emboldened Democrats in the wake of Tuesday’s gubernatorial election. A recent decision by the Kentucky GOP appears to have further stacked the deck against him.

It seems you can count the Republican Party of Kentucky itself among those believers.

On Wednesday, Republican Party of Kentucky Chairman J. McCauley Brown filed a complaint with the Federal Election Commission (FEC) alleging that Jones was using his daily radio show–which is syndicated by over 150 radio stations across Kentucky–to unlawfully promote his potential senate candidacy. As a result of the FEC filing, Jones was temporarily relieved of his hosting duties.

And that decision has not gone over well with Kentucky sports fans.

As of this writing, the hashtag #FreeMattJones was the number one trending topic on Twitter in America. And the controversy has prompted the previously unthinkable: scores of self-identified Republicans and conservatives proclaiming their opposition to–and intention to vote against–McConnell over Jones’ suspension.

A representative sampling follows below:

McConnell took Matt Jones off a show that brings people in this state together whether you’re Republican or Democrat. #FreeMattJones

Hey @senatemajldr you just gave @KySportsRadio much more political exposure than he was getting on the air by taking him off! #FreeMattJones

Hey Team Mitch… Grow up and grow a set! I’m a registered Republican and I’ll never vote for @senatemajldr @Team_Mitch again… I’ve never seen petty like this. You are pathetic and @KySportsRadio should be on the air! #FreeMattJones #dumbestmoveever

As a registered republican, I am embarassed and offended that Mitch McConnell has such a lack of confidence in his positions (and no respect for the intelligence of his electorate) that he feels the need to silence the competition. #FreeMattJones

As a member of the Republican party, hearing the news on @KySportsRadio leaves me absolutely dumbfounded. Matt has been such a great person to not only me, but to this entire state. I am disgusted with this decision of suppressing his right to free speech. #FreeMattJones

#FreeMattJones what a ridiculous stance to take! Sorry Mitch. No more votes from this Republican.

@senatemajldr Republican here, and you are the definition of Hipocracy, you pretended to back @KySportsRadio when @AmyMcGrathKY succeeded in removing Matt Jones from @hey_kentucky , then do the exact same thing. You are an ugly skid mark on all Republicans #FreeMattJones

Jones is no stranger to losing a media perch over politics.

Jones launched an exploratory committee for U.S. Senate on August 29, but has yet to fully commit to the idea. The beloved sportscaster told the Lexington Herald Leader that his decision-making process would be influenced by the recent election and after he met with voters by traveling throughout the Commonwealth of Kentucky.

“If I’m going to determine whether or not I should run, I should do it by going out in the state,” Jones said. “I think too often candidates sit there and think ‘you know what, I’d be really good at this,’ and then make the decision.”

Roughly two weeks before that decision, however, Jones was fired by Lexington NBC affiliate WLEX where he previously founded and hosted the “Hey, Kentucky” show. And another of his political rivals was allegedly behind that loss as well.

According to The Intercept, McGrath’s campaign manager Mark Nickolas was bragging about the hand that the McGrath campaign played in costing Jones that job. McGrath later denied responsibility.

At the time, it seemed that losing his WLEX gig would only likely spur Jones into contesting the Democratic nomination against McGrath–while providing him with plenty of free and empathetic publicity.

The Republican Party of Kentucky’s FEC complaint is similarly likely to do the same. Now, not only is Jones seen as a valid rival to McGrath’s struggling campaign, he’s able to plausibly position himself as the scourge of McConnell himself.

And the self-described “Southern populist progressive” is playing that angle up to the hilt.

Due to the Mitch McConnell complaint filed this morning with the FEC against me, iHeart Radio has asked that I not be on the show in the upcoming days. The complaint is absolute nonsense and very disappointing from someone as powerful as McConnell. I have said repeatedly in public and in filings with the FEC that I am not yet a candidate and I haven’t used the show to raise money or talk about my Exploratory Committee in any way. Nevertheless Senator McConnell has complained that having me on air is unfair and the man who speaks often about the importance of free speech and the exchange of public ideas has decided to cut off mine.