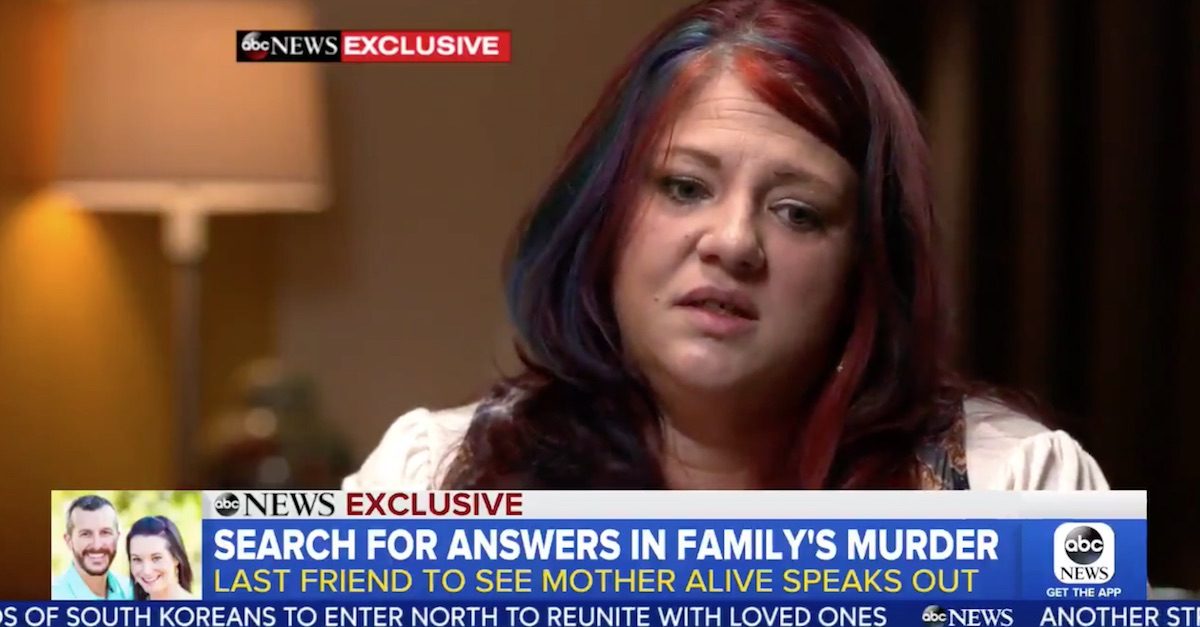 Nickole Atkinson was the last friend to see Shanann Watts, the pregnant Colorado mom who was brutally murdered along with her two daughters, Bella and Celeste.

Atkinson told “Good Morning America” that she was not surprised to learn that Christopher Watts had been arrested for the murders of his wife and children. Police say he confessed to the murders and hiding the bodies of his young daughters in “mostly full” oil and gas tanks at his workplace property.

The grieving Atkinson explained that she watched Watts’ interview like many others across America have and knew “something was wrong.”

“He was defending himself, but it just didn’t make sense. Like in that moment it is kind of surreal,” she said.  “He was just sitting there waiting for something to happen; it just didn’t seem right to me.”

According to ABC News, Watts is expected to be formally charged later Monday.

The father who confessed to killing his wife and two daughters is expected to be formally charged later today — This as the last friend to see the mother alive speaks out for the first time: https://t.co/0wZJnpowI9@Clayton_Sandell reports. pic.twitter.com/IwnV7ccGCm

“He just kept saying that he didn’t know where she was and that she was on a playdate. But he couldn’t give us the name of the friend,” Atkinson continued. “I knew he had something to do with it the day I was at his house with him, but I didn’t want to think that.”

Atkinson went on to say that the couple was “having some issues” around three weeks before the murders and said that Watts “wasn’t being the loving Chris that he normally was.”

“He wasn’t touching or hugging or doing stuff like that. He wasn’t being as attentive to the girls as he normally is,” she said.

Others close to the Watts family were similarly devastated by the news.

Jeremy Lindstrom told Denver7 that the “why” of it all is what he is struggling to understand. Lindstrom had recently hosted the Watts family at a birthday party for his son.

Now they’re saying they “feel so stupid […] trusting him to stay the night in the same house as our daughter.”

“He fooled us. And I’m so sorry. We just thought we were doing the right thing by being a good friend,” Nick Thayer added. “We were duped.”

On Thursday evening, authorities announced they found the bodies of 4-year-old Bella and 3-year-old Celeste Watts at a property belonging to Anadarko Petroleum, their dad’s now-former employer. It was later reported that their bodies were found in “mostly full” oil and gas tank to hide the smell of decomposing bodies. The bodies were found “in close proximity” to where Shanann Watts was found dead earlier Thursday.

“This is absolutely the worst possible outcome that any of us could imagine,” said John Camper, director for the Colorado Bureau of Investigation.