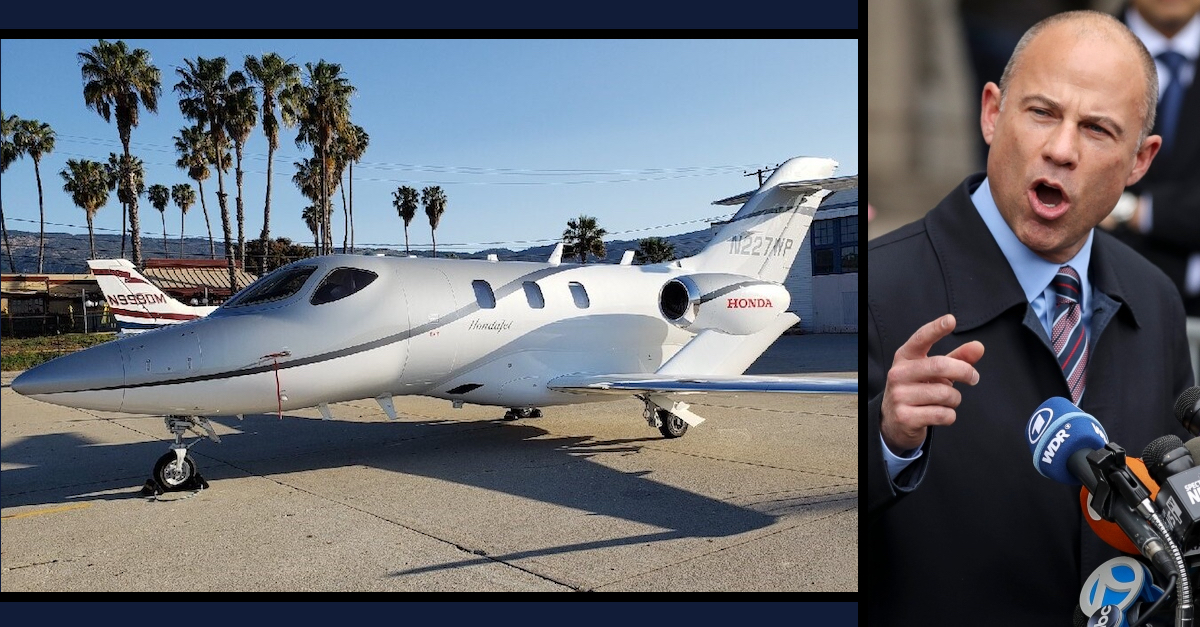 Four people are now claiming an ownership interest in Michael Avenatti’s jet, seized by the U.S. Department of Justice in April 2019.

The legal battle for Michael Avenatti’s jet is now a four-way match, with two ex-clients and the trustee for his bankrupt law firm jumping into the fray.

Lawyers for the jet’s co-owner, William Parrish, say Avenatti victimized him “as much as or more than any other party claiming an interest in the jet,” and the money Parrish put toward the aircraft entitles him to at least a portion of its sale proceeds.

They filed their petition late Thursday about the same time lawyers for the court-appointed trustee controlling Avenatti’s bankrupt law firm argued the jet should be used to compensate a long list of creditors owed millions.

Another ex-client joined in Friday, with a lawyer for Alexis Gardner arguing the fact that Avenatti paid for his portion of the jet with $2.5 million of her settlement money means it should go to her.

The petitions follow one filed Wednesday by Avenatti’s ex-law partner Andrew Stolper on behalf of another former partner, Jason Frank, whose been owed $15 million by Avenatti and the bankrupt Eagan Avenatti LLP law firm since 2018. Together, they create an unusual legal issue for Senior U.S. District Judge James V. Selna, who tentatively authorized the forfeiture of the Honda HA-420 jet last month to the U.S. Department of Justice but allowed for petitions claims outside ownership interests. Avenatti agreed to the forfeiture, but the four petitions mean Selna likely will hold a hearing to explore who, exactly, is legally entitled to the jet.

Seized by the DOJ in April 2019 in Santa Barbara, California, the jet was bought for $4.3 million in 2017 by Avenatti and Parrish through his business entity Spring Creek Research LLC. Parrish had met Avenatti about 10 years earlier when prominent plaintiff’s attorney Brian Panish brought him on to help him represent Parrish and Parrish’s friend and business partner, E. Timothy Fitzgibbons, in a malicious prosecution case lawsuit brought against their former employer over a failed trade secrets lawsuit.

The case settled in 2011 for $39 million, and Avenatti ended up directing the entire $15.4 million attorney fee to his firm, then paying Panish but not a third co-counsel, Robert Stoll. Eleven years later, Stoll took Parrish and Fitzgibbons to trial in Orange County Superior Court, accusing them of conspiring with Avenatti to stiff him out of his $5.4 million attorney fee. The jury sided with Parrish and Fitzgibbons in June, clearing them of wrongdoing and declaring Avenatti a “liar” in interviews with lawyers and a reporter in the courthouse hallway. Judge Walter Schwarm this week finalized a $21.5 million default judgment against Avenatti, though Stoll and his lawyer, James Keathley, have said they know it likely will never be paid.

Parrish’s lawyer Lawrence J. Conlan mentioned the case in Thursday’s jet petition as well as a $2.5 million judgment Parrish has against Avenatti over a loan. Parrish is unlikely to ever recover anything from Avenatti, but his “vested interest in the jet is clear and in fairness [he] should not be deprived of that interest any longer,” Conlan wrote.

“All in, Defendant Avenatti’s misconduct is the source of more than $6 million in out-of-pocket damages to Petitioner and Mr. Parrish,” according to the petition. Given Parrish’s 53 percent ownership, if any claims such as those from the law firm or from Frank are found to be valid, “they should be limited to not more than the approximately 47 percent” that represents Avenatti’s ownership. Conlan added that he learned of the forfeiture not through the U.S. Attorney’s Office, despite Parrish’s clear ownership interest, but from “legal media.”

Parrish’s petition also notes that Gardner’s lawyer, Filippo Marchino of the X-Law Group, is accused of wiring Gardner’s settlement money to Honda to purchase the jet for Avenatti. So while Gardner “may have claims against Marchino and X Law for disposing of her money without her consent, she does not have a valid claim of interest in the Honda Jet.”

Marchino is the target of a separate proceeding in U.S. Bankruptcy Court in which Richard Marshack, the trustee for Avenatti’s bankrupt law firm, is trying to get money from civil cases Marchino transferred to the X-Law Group, which he opened amid Avenatti’s mounting legal problems.

A prosecution witness in Avenatti’s 2021 California trial, Marchino wrote in his petition that Avenatti’s “severe ethical misconduct and breach of fiduciary duty” means Gardner is entitled to her entire $2.75 million settlement with no contingency fee deduction for Avenatti, which could be mostly covered if she was given ownership of the jet.

Parrish and the law firm “knowingly and voluntarily assumed a risk” when buying the jet, but Gardner never did because her money was stolen from her, she argues.

The aircraft hans’t been flown since 2019, so Marchino reasons its value “is less than the amount of money Gardner is owed and she should be awarded a 100% ownership interest in the Aircraft or all proceeds from its sale.”

Meanwhile, lawyers for Marshack, who’s been trying since 2019 to recover wrongly spent money from Avenatti’s firm with no big recoveries so far, said Avenatti wrongly paid for some of the jet using firm money that should have gone to creditors, and the firm is due about $1.4 million.

Judge Selna has not yet scheduled a hearing on the flap surrounding the jet, but Avenatti is scheduled to be sentenced on Oct. 31. He’s currently imprisoned on Terminal Island near Long Beach, serving sentences out of the Southern District of New York for extorting Nike and defrauding Stormy Daniels.

Read the full petitions below.

(Image of plane via a U.S. Department of Justice photo; image of Avenatti via Drew Angerer/Getty Images.)