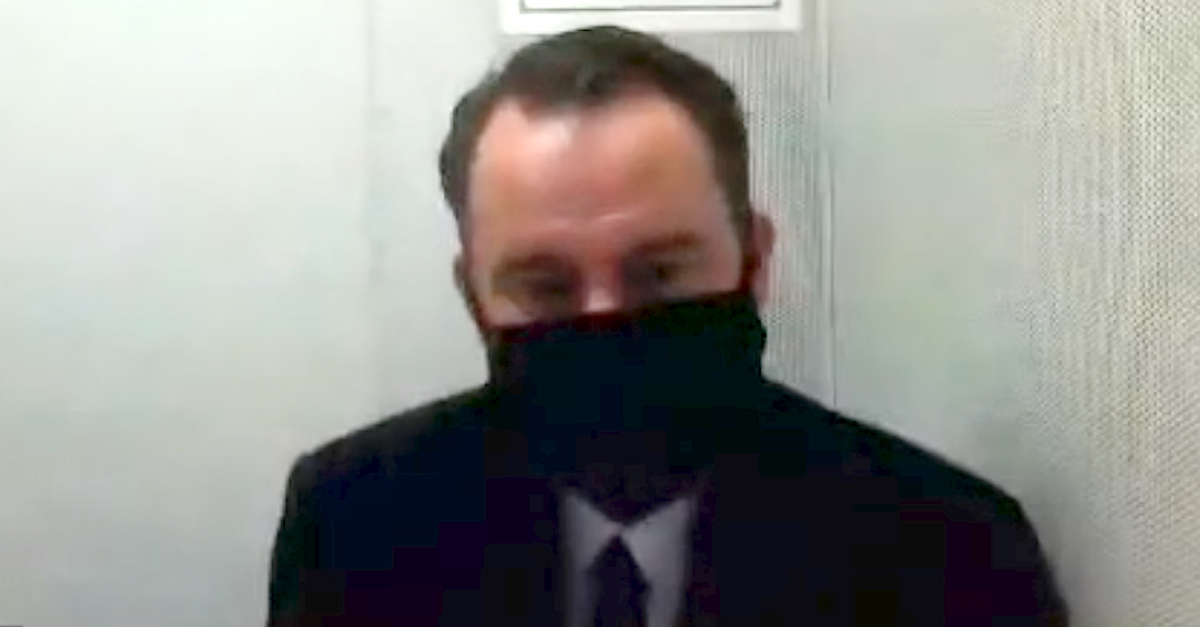 Jarrod Agen, the former Chief of Staff to Michigan Gov. Rick Snyder, was arraigned Thursday morning after being indicted by a grand jury on one felony count of perjury for allegedly lying “during an investigative subpoena investigation” involving the Flint water crisis. The allegations involved “giving false statements under oath,” said Michigan Solicitor General Fadwa A. Hammoud at a press conference late Thursday morning.

The court entered a not guilty plea on Agen’s behalf. The alleged crime carries a possible fifteen year prison sentence under Michigan law. The statute under which Agen is charged states:

A person who makes a false statement under oath in an examination conducted under this chapter knowing the statement is false is guilty of perjury punishable . . . by imprisonment for not more than 15 years.

Agen is among a handful of officials, including former Gov. Snyder and former Michigan Health and Human Services Director Nick Lyon, to be indicted criminally for actions or statements made surrounding the Flint water crisis.

After serving in Michigan Gov. Snyder’s administration, Agen went on to serve as the director of communications and Deputy Chief of Staff to Vice President Mike Pence.  He was also a deputy assistant to President Donald Trump.  Earlier in his career and before working in Michigan, Agen worked for former New York City Mayor and current Trump Attorney Rudy Giuliani as a regional communications director during Giuliani’s failed presidential run, Agen’s LinkedIn page and a press release indicate.

Politico once described Agen as “one of the vice president’s most trusted advisers” in a brief feature.

Pence touted Agen’s experience in the Flint water crisis when Agen was hired.  Per a Feb. 1, 2017 press release:

Last January, Agen was promoted from Communications Director to Chief of Staff for Governor Rick Snyder of Michigan, taking the Chief of Staff role one day before the state declared an emergency in the Flint water crisis. Over the past year, Agen helped manage the state through one of the most complex crises in America, overseeing the emergency response, communications, and the recovery efforts for Flint.

At the time, Pence loved it.

“Jarrod’s experience at both the state and federal level brings an unmatched perspective to our office,” Pence said per the release. “Having worked on the ground in several states throughout our country, he mixes an outside-of-Washington approach with high-level federal experience.”

Now, that same experience has put Agen in the defendant’s chair.  He is being prosecuted by the office of Michigan Attorney General Dana Nessel, a Democrat.

Agen is currently a spokesperson for aerospace and security company Lockheed Martin, his attorney noted during Thursday’s arraignment.  His LinkedIn page indicates he is a vice president of global media and digital communications for the global defense company.

During the arraignment, which ensured that Agen received and understood the charges against him and set the parameters of Agen’s ability to stay out of jail pending trial, Agen’s attorney asked that he be allowed to travel around the Washington, D.C. area and elsewhere to handle work duties, court obligations, and family matters.

“Mr. Agen is a husband and father of two small children; he lives in Alexandria, Virginia,” Agen’s attorney, J. Benjamin Dolan, said during the arraignment.  “He works for Lockheed Martin. He’s currently the communications director there; he’s the lead spokesman for Lockheed, which is the largest defense contractor in the world.”

“He works in Bethesda, Maryland, which is nearby Alexandria, Virginia,” Dolan said while noting that Agen’s local attorney is in Washington, D.C.

“Mr. Agen is a pillar of his society and of his community,” Dolan also said. “He has no criminal record; he is not a flight risk whatsoever; he came here voluntarily from D.C. last night.”

Dolan further told the judge that Agen appeared voluntarily at a Feb. 2017 investigative hearing about the Flint water crisis.

“He is no danger to society whatsoever,” Dolan said.

The defense sought a mere personal recognizance bond.  The attorney general’s office sought something further but did not elaborate with detail about what it considered an appropriate suggestion.

A representative from the A.G.’s office also did not object to Agen’s travel around Virginia, Maryland, D.C., Michigan, or elsewhere for work, but he did ask that Agen surrender his passport.

The defense said it would comply with the uncontested travel and passport matters.

Judge Elizabeth Kelly ordered a $35,000, 10% bond and allowed Agen to travel for work purposes only.  The court also noted that COVID had hampered travel, anyway — which counsel previously also noted — and said Agen had to surrender his passport by Monday at 5 p.m.

Solicitor General Hammoud said later that the cost of the investigation was worth it even if the charges faced by former top state officials were relatively minor.  She noted that using the grand jury process — which is rare in Michigan — would result in the cases going “directly to circuit court” rather than through “preliminary examinations.”

“We’re confident in all the charges,” said Wayne County, Mich. Prosecutor Kym L. Worthy, who is working the case.  “This case has nothing to do with partisanship,” she said, but is rather about officials “abandoning the people of Flint.”

Officials are accused of taking water from a river to service the City of Flint while a pipeline was under construction to secure cleaner water from Lake Huron.  The switch to river water resulted in high levels of lead and iron.  An outbreak of Legionnaires’ Disease also killed twelve people; it was blamed on poor water treatment procedures which resulted in low chlorine levels.