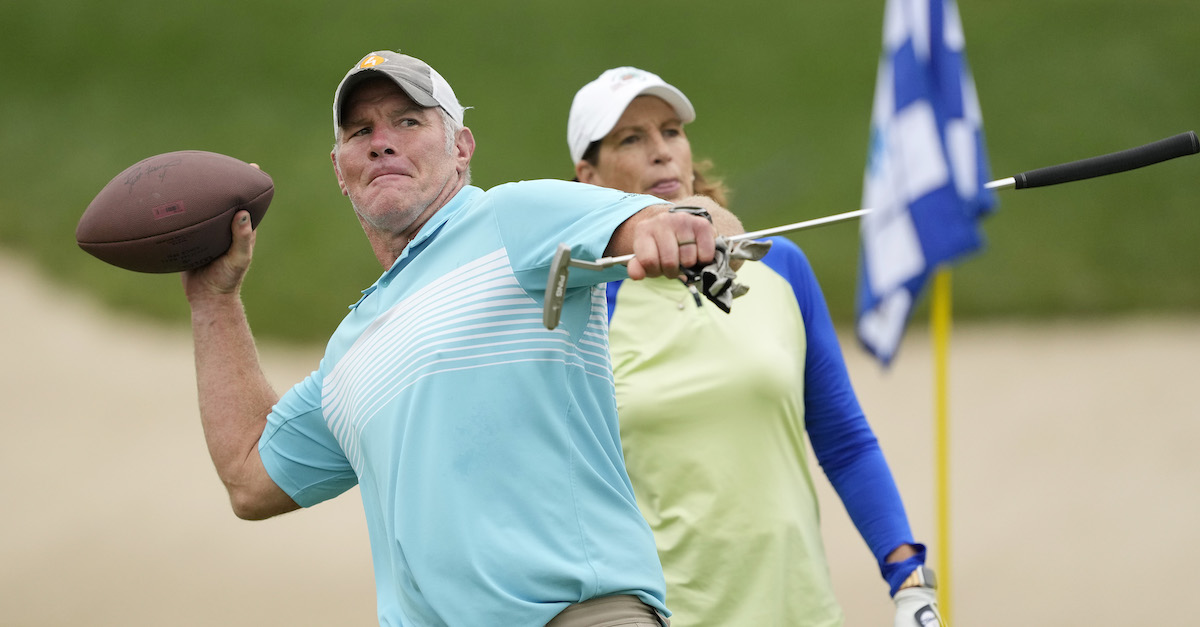 Former NFL player Brett Favre throws a football to a fan on the 14th green during the Celebrity Foursome at the second round of the American Family Insurance Championship at University Ridge Golf Club on June 11, 2022 in Madison, Wisconsin.

The former head of the Mississippi Department of Human Services this week admitted to conspiring to defraud the state of millions of dollars in federal funds, a major development in the one of the largest public corruption cases in state history and one that may complicate matters for NFL Hall of Fame quarterback Brett Favre.

According to the Department of Justice, Davis and his co-conspirators diverted millions of dollars in “federal safety-net funds” away from “needy families and low-income individuals” in the most impoverished state in the nation.

As part of the plea agreement reached with prosecutors, the state charges against Davis are being dropped in exchange for him agreeing to “provide truthful testimony at trial, with the State and all federal authorities in the prosecution of any and all additional criminally charged defendants,” according to an Order of Nolle Prosequi filed by state prosecutors Wednesday in Hinds County Circuit Court.

“Today marks an important day for justice for Mississippians in the massive welfare scheme that my office uncovered more than two years ago. District Attorney Jody Owens and his team did an incredible job putting a stop to the flow of money to the fraudsters who took from the poorest in the state,” Mississippi State Auditor Shad White said in a statement released via Twitter. “We would not be here if they had not shown courage and the willingness to charge these individuals with crimes. We are also grateful for our federal partners and their work obtaining a guilty plea this week, too. My team has given every piece of evidence we have to federal investigators and will continue to work jointly with them to see this matter to its conclusion.”

Davis had previously faced dozens of state and federal charges after investigators determined that over $77 million was diverted from the Temporary Assistance for Needy Families (TANF) program administered by the state’s DHS in order to benefit the wealthy and well-connected.

Favre and his attorney, Bud Holmes, have repeatedly maintained his innocence regarding the no-show speech claim, and they have insisted the Hall of Famer was ignorant of where the funds were sourced. He has paid most of them back, except an alleged substantial amount of interest.

But as previously reported by Law&Crime, text messages released last week as part of a civil lawsuit appear to show Favre expressing concern that the media would learn the source and amount of money proposed to be sent to him by recently-convicted nonprofit director Nancy New, one of the fraud scheme’s principals.

“If you were to pay me is there anyway the media can find out where it came from and how much?” Favre allegedly wrote in an August 2017 message to New.

Those messages are purportedly a discussion about about welfare funds being diverted to pay for the construction of a new volleyball stadium at the University of Southern Mississippi, where his daughter played on the volleyball team from 2017 until 2022.

As the volleyball stadium-funding effort eventually picked up steam, then-Governor Phil Bryant (R) ousted then-DHS directorDavis because the latter man was suspected of fraud. Bryant then helped the process play out after Davis’ departure.

“Just left Brett Farve [sic],” Bryant purportedly texted Nancy New in July 2019. “Can we help him with his project. We should meet soon to see how I can make sure we keep your projects on course.”

According to Mississippi Today, the messages show that Bryant, Favre, New, Davis and others were able to secure some $5 million for the new volleyball stadium.

Favre has not been accused of a crime, but criminal defense attorney Matt Tympanick reportedly told Front Office Sports that it may only be a matter of time before that changes.

“If Favre gets indicted — and I expect he will be — one of the counts will surely be wire fraud. The text messages show that he was asking if you pay me money, would anybody be able to determine who paid me and how much?” Tympanick reportedly told the outlet. “If those text messages can be authenticated by Davis, they can be used at trial. If not, they would deemed inadmissible at trial.”

Davis is scheduled to be sentenced on Feb. 2, 2023, and faces a maximum penalty of five years in federal prison for the conspiracy count and 10 years in prison for the theft concerning programs receiving federal funds count.

Holmes did not immediately respond to a request for comment from Law&Crime.