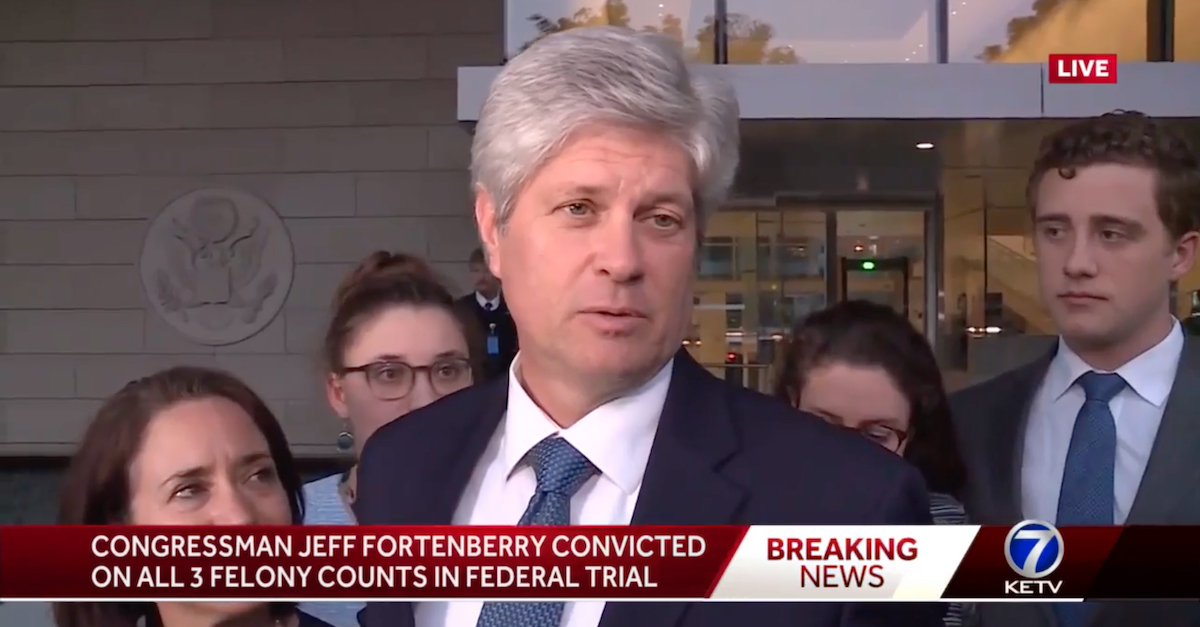 A Republican U.S. congressman in Nebraska who resigned from office following his March 2022 conviction for lying to the FBI was sentenced to probation on Tuesday.

Federal prosecutors with the U.S. Attorney’s Office for the Central District of California announced the sentencing of convicted felon Jeff Fortenberry, 61, on Twitter, noting that the former representative for Nebraska’s first congressional district was found guilty of lying about foreign campaign contributions.

Fortenberry was sentenced to serve two years of probation and 320 hours of community service for “scheming to falsify and conceal material facts and two counts of making false statements to federal investigators.” He will also have to pay a $25,000 fine. U.S. District Judge Stanley Blumenfeld Jr. said Fortenberry “turned a blind and a deaf ear” to information about illegal contributions to his re-election campaign. Prosecutors said the $30,000 in contributions were made by foreign billionaire Gilbert Chagoury through “straw donors” who had attended a campaign fundraiser for the candidate in Los Angeles.

“[Fortenberry] saw, he heard and he certainly knew…the contributions at a minimum were conduit contributions,” Judge Blumenfeld said, according to the USAO.

Back when he was indicted, Fortenberry memorably made a video plea for help and slammed the case against him as “wrong on so many levels.”

“I try to give you honest, clear answers and do my duty as a representative for our great state and for America, and I try to do forthrightly for you and our family,” Fortenberry said at the time. “To be accused of this is extremely painful and we are suffering greatly. We will fight these charges. I did not lie to them. I told them what I knew. But we need your help, first of all. Please pray with us, because this is a difficult time.”

The defense sentencing memo, emphasizing the Fortenberry’s history of public service, asked the judge to sentence the former congressman to one year of probation and no fine.

“Jeffrey Fortenberry is a committed father of five and devoted husband who served the public with distinction on the City Council of Lincoln, Nebraska, and then in the United States House of Representatives over a combined quarter-century. He has earned respect, admiration, and meaningful relationships with friends and colleagues from a wide range of viewpoints and backgrounds,” the memo began, noting that the ex-Republican lawmaker will not be allowed to have a gun as a convicted felon. “The conviction in this case devastatingly impacted Mr. Fortenberry’s life. Once a revered public servant, Mr. Fortenberry resigned from Congress. Stripped of the rights to vote and possess a firearm, Mr. Fortenberry cannot even participate in our democracy. The federal pension that he relied on for retirement is now in jeopardy.”

The government, on the other hand, depicted Fortenberry as a power-hungry politician motivated by a “selfish desire” to remain in office:

Defendant Jeffrey Fortenberry was a powerful career politician who swore an oath to support and defend the United States and to serve the interests of his constituents. Defendant violated that oath, and broke the law, when he repeatedly chose to serve himself, his political career, and his ego during the course of a significant federal investigation into violations of the Federal Election Campaign Act (“FECA”), bribery, and foreign influence—paramount matters implicating the core of American democracy. Despite numerous opportunities to correct his course, defendant deliberately and proactively chose the path of self-preservation and abandoned his oath and duty when he made the calculated decision to repeatedly lie to and mislead federal investigators. Defendant then entreated federal investigators for an audience in Washington D.C. and, when they agreed, defendant executed his premeditated plan to intentionally feed the investigators more falsities and misleading information in an attempt to throw them off his trail. Aggravating matters still, defendant sought to use his status as a lawmaker to deter and even intimidate investigators who were following their own sworn duty and the objective evidence wherever it led them, including to the doorstep of an elected U.S. Congressmember in Nebraska who sat on the influential House Foreign Affairs Committee. And when all that failed, defendant pursued baseless and personal attacks in litigation against the lead FBI investigator and the prosecutors and even attempted to lay blame on his election lawyer and prior defense attorney—all in an effort to evade defendant’s own self-created criminal liability.

The effect of defendant’s criminal conduct has been to fuel distrust in our federal elected officials. His conduct further undermined the already fraying public trust of defendant’s constituents and citizens nationwide. Defendant did not engage in this wrongdoing out of an urgent financial need or because of an aberrant life circumstance. Rather, he was motivated by plain, selfish desire to cling to his status as a powerful federal official.

Prosecutors asked for but didn’t secure a comparatively stiffer sentence of “6 months of imprisonment, followed by two years of supervised release, a $30,000 fine, 150 hours of community service, and a special assessment of $300.” Judge Blumenfeld, a Donald Trump appointee, ultimately opted not to sentence Fortenberry to time behind bars.

Read the defense and government sentencing memoranda below: