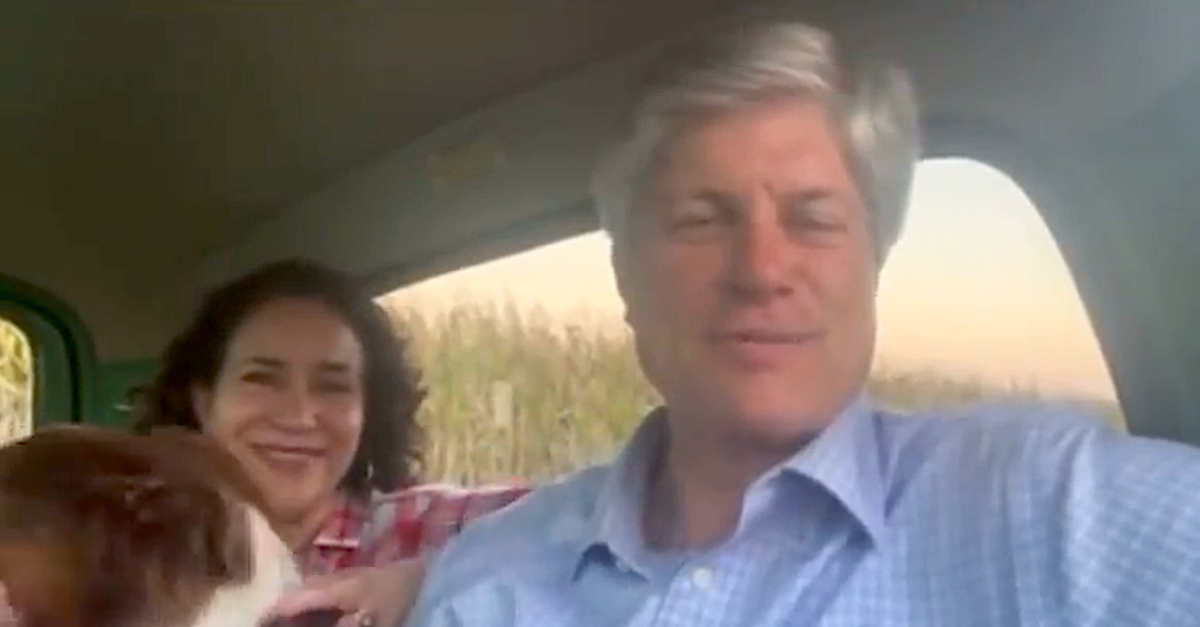 Jeff Fortenberry appears in a message to supporters on Oct. 19, 2021, as he was being indicted in California.

Rep. Jeff Fortenberry, a Nebraska Republican, on Tuesday was indicted by a federal grand jury in the Central District of California on charges that he lied to federal investigators and concealed information connected to “illegal contributions made by a foreign national,” the Department of Justice announced.

Fortenberry, of Lincoln, Neb., is accused of one count of scheming to falsify and conceal material facts and two counts of making false statements to federal investigators. The three charges are all felonies punishable by up to five years in prison.

“The indictment alleges that Fortenberry repeatedly lied to and misled authorities during a federal investigation into illegal contributions to Fortenberry’s re-election campaign made by a foreign billionaire in early 2016,” the DOJ said in a press release.

First elected in 2005, Fortenberry is charged in connection with a campaign donation by the Nigerian-born billionaire Gilbert Chagoury in 2016. Prosecutors allege that the $30,000 donation was funneled through “other individuals” and “conduits” because foreign nationals cannot make contributions to federal election campaigns. It is also illegal to funnel money through other individuals, the DOJ noted.

The indictment was handed up to a judge in Los Angeles because that is where Fortenberry held a fundraiser which resulted in the donations, the DOJ said.

Chagoury, the donor, pumped $180,000 into various U.S. political races, the DOJ said. He entered into a deferred prosecution agreement, paid a $1.8 million fine, and agreed to cooperate with the feds.

Fortenberry took to social media from the driver’s seat of his “1963 Ford F100 pickup” with his wife and dog to rubbish the indictment in a video.

“We do have something hard to tell you,” Fortenberry said to those who had been “kind” and treated him with “such generosity” over the years.

The lawmaker claimed he “didn’t know anything about” the donation when it occurred and that those who funneled the contribution were “thankfully” punished.

None of those facts are germane to the indictment.

Fortenberry said several years later, FBI agents from California knocked on his door in Nebraska and asked him about the donations.

“I let them in my house,” Fortenberry said, apparently disregarding old advice about not talking to law enforcement authorities. “I answered their questions. Later, we went back and answered further questions. I told them what I knew and what I understood. They’ve accused me of lying to them and are charging me with this. We’re shocked. We’re stunned. I feel so personally betrayed. We thought we were trying to help. And, so, now we will have to fight.”

“I try to give you honest, clear answers and do my duty as a representative for our great state and for America, and I try to do forthrightly for you and our family,” Fortenberry continued.  “To be accused of this is extremely painful and we are suffering greatly.  We will fight these charges.  I did not lie to them.  I told them what I knew.  But we need your help, first of all.  Please pray with us, because this is a difficult time.”

Fortenberry added that the indictment was “wrong on so many levels.”  He also said “kind comments” would be “helpful.”

The Department of Justice put it differently. It said Fortenberry spoke with a fundraising host known as “Individual H” in the spring of 2018 about hosing yet another fundraiser. The DOJ narrative continues:

In a June 2018 call, Individual H told the congressman on multiple occasions that a Chagoury associate – Toufic Joseph Baaklini, who also entered into a deferred prosecution agreement with prosecutors – had provided him with $30,000 cash to route to Fortenberry’s campaign at the 2016 fundraiser, the indictment alleges. Individual H allegedly told Fortenberry that the money – which was distributed to other individuals at the fundraiser so the donations could be made under their names and avoid individual donor limits – “probably did come from Gilbert Chagoury.”

Despite learning of the illegal campaign contributions, Fortenberry did not file an amended report with the Federal Elections Commission, the indictment alleges.

The indictment alleges a scheme in which Fortenberry, after learning this information, “knowingly and willfully falsified, concealed, and covered up by trick, scheme, and device material facts” about the illegal campaign contributions.

That alleged scheme included lying during a March 23, 2019 interview with investigators, the DOJ said:

At a second interview on July 18, 2019 with federal investigators and prosecutors, Fortenberry allegedly made additional false statements, including denying he was aware of any illicit donation made during the 2016 fundraiser, denying that Individual H had told him Baaklini had provided the $30,000 cash at the 2016 fundraiser, and stating that he would have been “horrified” to learn about the illegal conduit contributions, according to the indictment.

During this second interview, Fortenberry also misleadingly stated he ended the June 2018 call with Individual H after that person made a “concerning comment,” when in fact Fortenberry continued to ask Individual H to host another fundraiser for his campaign, the indictment states.

Fortenberry will be arraigned Wednesday in Los Angeles.