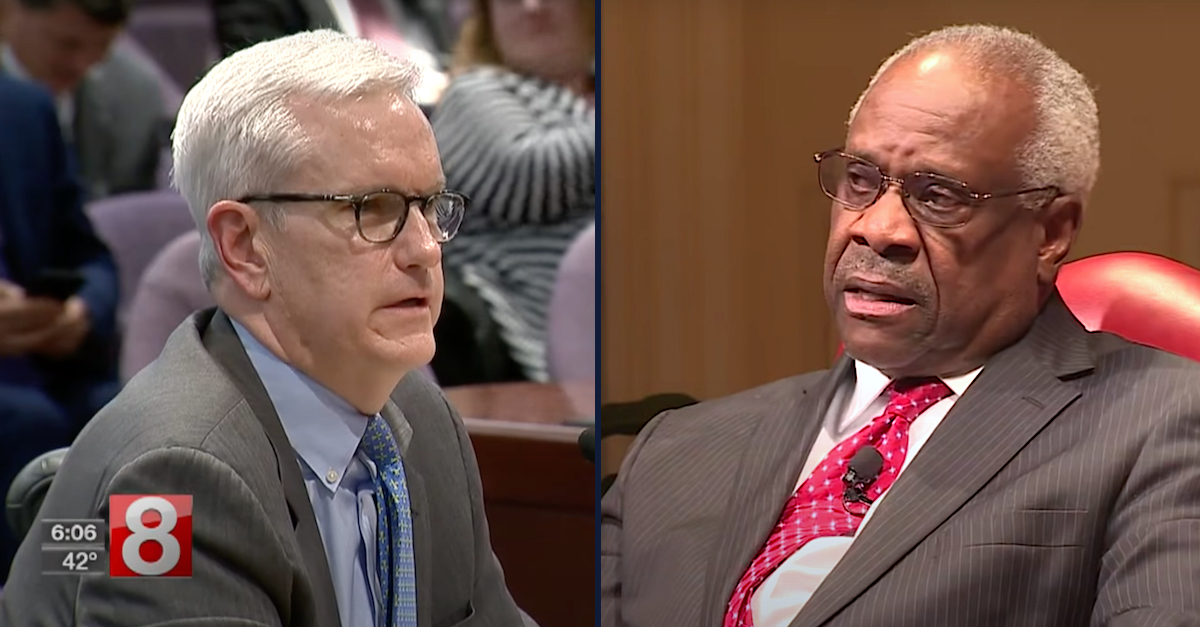 In a Facebook post on Monday, Connecticut Supreme Court Justice Andrew McDonald criticized Justice Clarence Thomas of the U.S. Supreme Court for what McDonald believed was the profound hypocrisy of Thomas’s desire to strip adults of the freedom to marry a person of their own choosing.

“Mr. Justice Thomas had much to say today about my loving marriage,” McDonald posted online, according to a CNBC report. “Oddly he didn’t have much to say about his ‘Loving’ marriage.”

The reported post was a dig at Thomas’s position on same-sex marriage in comparison with Thomas’s own interracial union.

McDonald married his husband Charles in 2009. The U.S. Supreme Court ruled that same-sex marriages must be permitted and recognized by states nationwide as a matter of U.S. constitutional law in 2015.  Some states allowed same-sex marriages before 2015.

In last Friday’s U.S. Supreme Court ruling which overturned Roe v. Wade, however, Thomas authored his own concurring opinion which specifically urged the high court to rethink its ruling on same-sex marriage.

Thomas’s concurrence drew McDonald’s ire. McDonald and many others have specifically pointed to a personal connection between Thomas and matters of prohibited marriage.

Clarence Thomas is Black. His wife, Ginni Thomas, is white. They are an interracial couple, just as Mildred Jeter and Richard Loving were in 1959. Jeter and Loving were convicted of violating Virginia’s criminal law against interracial marriage and were subsequently sentenced to a year in prison. In 1967, though, the Supreme Court invalidated those convictions when it ruled in Loving v. Virginia that state laws prohibiting interracial marriage were unconstitutional violations of the Equal Protection Clause.

To many, including McDonald, the underlying issue of same-sex marriage is the same as interracial marriage: either consenting adults do — or do not — have a right to marry who they wish.

Against the backdrop of the decades-old precedent in Loving, Thomas’s concurrence in Dobbs v. Jackson Women’s Health Organization may seem — and, to McDonald, did seem — wrong-footed.

In the latter case, Thomas urged a total revamp of substantive due process jurisprudence — the legal principle which currently underlies certain individual freedoms including the rights to same-sex marriage, to use contraception, and to engage in private sexual acts without being arrested and prosecuted.

“As I have previously explained, ‘substantive due process’ is an oxymoron that ‘lack[s] any basis in the Constitution,'” Thomas said while quoting his own previous opinions.

The due process clause, according to Thomas, “does not secure any substantive rights.” In other words, according to Thomas, abortion, contraception, private sexual acts, and same-sex marriage may be off the table (unless, as he clearly articulated in his concurrence, they find footing in other portions of the Constitution).

Thomas’s argument was not explicitly based in any specific abhorrence of the underlying rights. Rather, he believed previous justices misread the Constitution as a matter of law by engaging in a “demonstrably incorrect reading of the Due Process Clause.”

Thomas called substantive due process — the practice of extrapolating certain rights from the word “liberty” in the Fourteenth Amendment — a “legal fiction” that is “particularly dangerous.”

Notably absent, however, was any reference to interracial marriage. That’s because, as Law&Crime previously pointed out, Thomas believes the origin point for the right to marry a person of another race is not in the Due Process clause. Instead, the Supreme Court unanimously decided in 1967 in Loving v. Virginia that the right to interracial marriage is based in the Equal Protection Clause of the Constitution.

The difference between substantive due process and equal protection may seem like little more than meaningless semantics. And, indeed, many justices and legal scholars see very little if any distinction between the two concepts. But each clause of the Constitution has its own meaning, interpretive history, relevant case law, and analytical structure. In constitutional terms, Thomas believes the two legal guarantees exist in entirely different spheres that are essentially walled off from one another.

When SCOTUS decided Loving, its logic was that the Constitution guarantees protection against unequal treatment among races. The case was, at its heart, about discrimination. By contrast, Obergefell v. Hodges — the same-sex marriage case — was a substantive due process case in which SCOTUS ruled that the right to marry was fundamental liberty afforded to all people. Much of the debate in Obergefell related to the nature of marriage itself, and not to the idea that prohibitions against same-sex marriage amounted to discrimination on the basis of gender or sexual identity.

“The suggestion of petitioners and their amici that antimiscegenation laws are akin to laws defining marriage as between one man and one woman is both offensive and inaccurate,” Thomas wrote.

In short, to Thomas, the issue of gay marriage is about marriage, not about discrimination.

Obergefell arguably could have been decided on equal protection grounds. The Court could have ruled that because sexual orientation or identity is an immutable characteristic deserving of heightened protection, states may not legally discriminate on those bases. But SCOTUS did not do that. Rather, it chose the less controversial road of deciding the case based on a fundamental liberty interest in the right to marry. In that way, the Obergefell ruling reinforced the Supreme Court’s stance on the institution of marriage without extending special protection to members of the LGBTQ+ community.

As an experienced jurist, Justice McDonald would certainly know why Thomas believes substantive due process issues cannot commingle with matters of equal protection. Still, his point likely reflects the beliefs of many: that as Americans, we either do or do not believe government should restrict an adult’s right to marry someone — anyone — of their choosing.

Justice McDonald has been an associate justice of the Connecticut Supreme Court since 2013. In 2018, he was nominated to serve as Chief Justice, but the confirmation failed in a close vote. Had McDonald been confirmed, he would have become the first openly gay chief justice of a state Supreme Court. Republicans fought the nomination — not because of his “sexual orientation,” but rather because McDonald had voted against the death penalty.

“The enormous honor of leading the Connecticut judiciary as an independent and coequal branch of government will now fall to another,” McDonald said after the vote failed to elevate him to the position of chief justice.

“In this turbulent personal moment, I don’t know what the future holds for me,” he continued. “I do know, however, that I will face it secure in the love and affection of my husband, Charles, and an amazing group of friends and family.”

The Thomas concurrence in Dobbs is not controlling law, and Thomas stood alone in his opinion about the wall between the Equal Protection Clause and the Due Process Clause. He has written about his perception of that distinction several times in the past and likely will continue to do so in the future; his legal opinions on the matter remain a minority position among legal scholars and justices.

Justice Samuel Alito’s majority opinion in Dobbs sets the precedent to be followed in the future. Still, Thomas’s call to eradicate substantive due process is profoundly important in its own right. At minimum, it signals that one sitting justice is ready to upend well-settled law about what individual freedoms we are guaranteed. While the other conservative justices may not have been ready to take such a step in Dobbs, Thomas’s critics fear that his logic could influence others on the Supreme Court in the future.