Former Federal Prosecutor: Top U.S. Diplomat to Ukraine’s Testimony Is Going to Be a ‘Gold Mine’ for Investigators 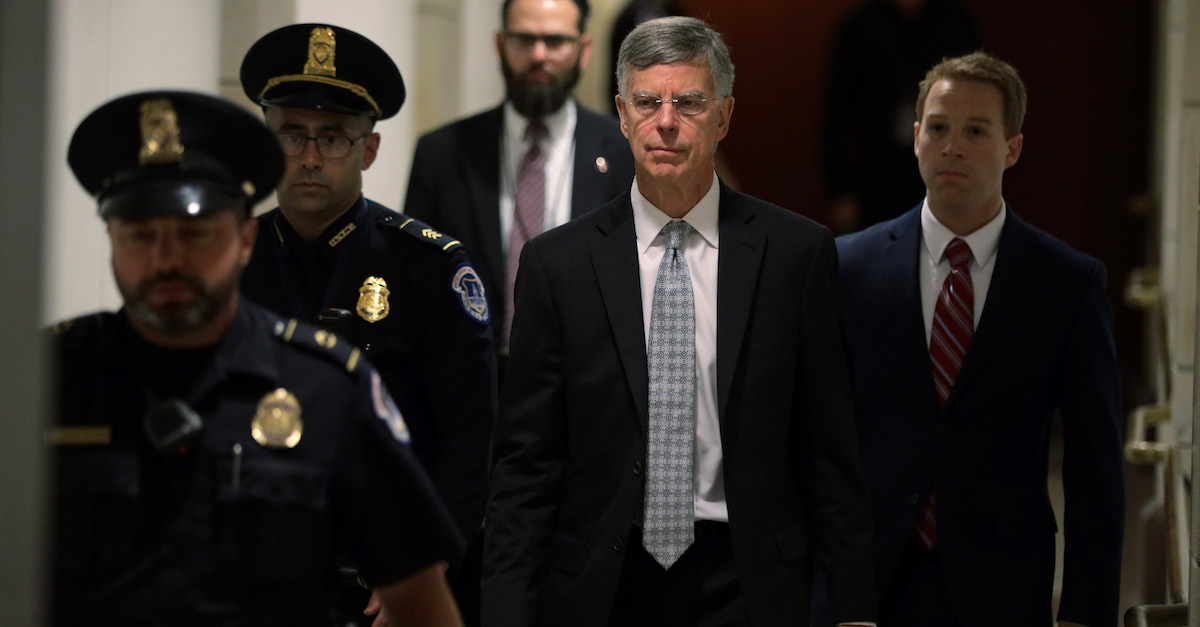 WASHINGTON, DC – OCTOBER 22: Bill Taylor (C), the top U.S. diplomat to Ukraine, arrives at a closed session before the House Intelligence, Foreign Affairs and Oversight committees October 22, 2019 at the U.S. Capitol in Washington, DC. Taylor was on Capitol Hill to testify to the committees for the ongoing impeachment inquiry against President Donald Trump.

Top U.S. diplomat to Ukraine William “Bill” Taylor is testifying in a closed session before the House Intelligence, Foreign Affairs and Oversight Committees, as Gordon Sondland, Marie Yovanovitch, Kurt Volker, George Kent and Fiona Hill have before him. But in the estimation of CNN legal analyst and former federal prosecutor Elie Honig, it is Taylor’s testimony that has the potential to be a “gold mine” for investigators. It’s not hard to see why.

Taylor is expected to testify all day and he’s expected to provide key context surrounding his text messages, in which he expressed concerns that congressionally appropriated military aid to Ukraine was being held up for “assistance” with President Donald Trump’s “political campaign.” Per CNN:

Taylor, who is testifying before the three House committees leading the Democratic impeachment inquiry, will lay out the reasoning behind his different WhatsApp text messages in his opening statement Tuesday, the source said. Taylor plans to include a chronology of events, according to the source, dating back to June, when Taylor assumed the post as ambassador, through October.

Taylor’s testimony is among the most significant for Democratic impeachment investigators because of text messages he exchanged with US Ambassador to the European Union Gordon Sondland and former US special envoy for Ukraine Kurt Volker about the freezing of US security aid to Ukraine. In the texts, Taylor told Sondland in September: “I think it’s crazy to withhold security assistance for help with a political campaign.”

Taylor was thrust into the center of the Ukraine scandal when former U.S. special envoy to Ukraine Kurt Volker released text messages between several diplomats regarding the Trump Administration’s decision to withhold the military aid. The July 2019 discussion revealed that Taylor was under the impression President Trump was intentionally withholding the funds intended for Ukraine in order to compel their assistance in furthering his political goals by digging up dirt on the political rival Joe Biden and his son Hunter Biden.

One of those text messages from Taylor is now widely known, as it appeared to be an attempt to “go to paper,” so to speak:  “As I said on the phone, I think it’s crazy to withhold security assistance for help with a political campaign.”

Those concerns were initially downplayed by U.S. Ambassador to the European Union Gordon Sondland, a hotel owner who donated more than $1 million to Trump’s inaugural committee. He responded that Trump had been “crystal clear: no quid pro quo’s of any kind.” Sondland has since admitted, however, that his response was dictated by the president and may not have been truthful.

Elie Honig, a former assistant U.S. Attorney in the Southern District of New York, believes that Taylor’s testimony will be the key to connecting the dots:

The documents are key, but we already have, I think, the most important documents, which are those texts. And I think this is a golden opportunity for the committee to really fill in the gaps. Look at these texts. The famous text where Taylor writes, are we now saying that security assistance and the White House visit are conditioned on investigations? Well, I would ask him what happened right before that — “Are we now saying.” Somebody said or did something that prompted him to write that text. Same thing with the other one — “As I said on the phone, I think it’s crazy to withhold” — Okay so, what preceded it, who are you talking to? This is really a gold mine for the investigators, and I think they’re going to get a lot out of this.

You can watch Honig’s remarks in the player above.