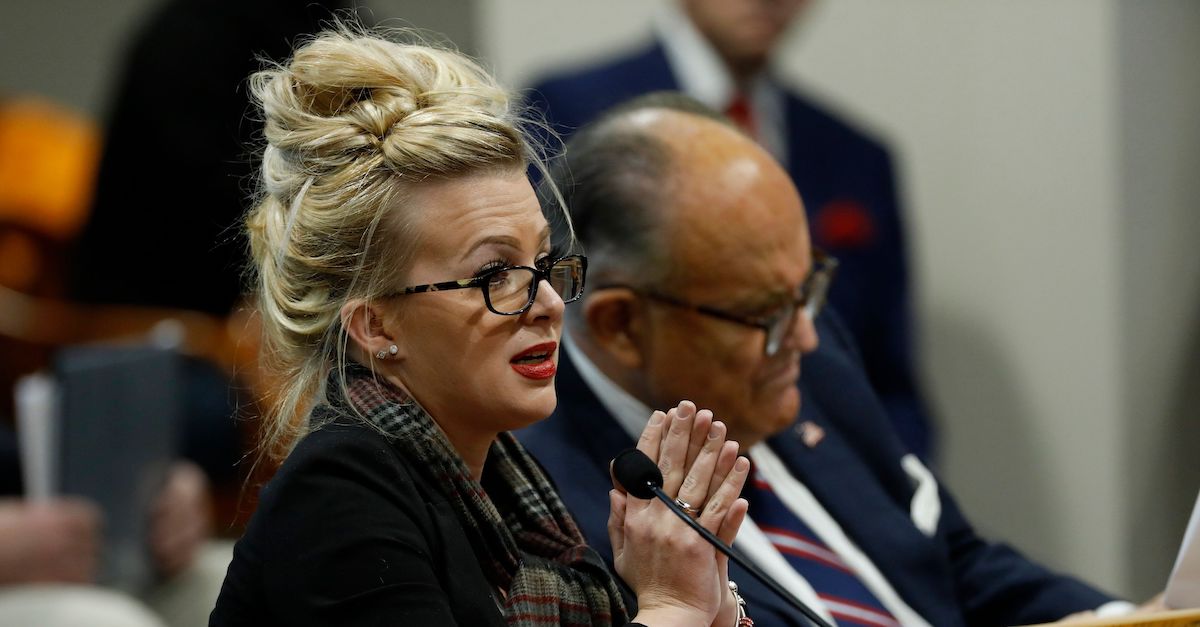 Mellissa Carone, the former Dominion Voting Systems contractor and so-called “star witness” in Michigan’s Rudy Giuliani-led election fraud hearings back in Dec. 2020, has formed a campaign committee to run for the state House of Representatives as a Republican next year.

The 33-year-old registered to run for the state’s 46th District seat in Oakland County, a reliably Republican area currently held by Rep. John Reilly, The Detroit News reported on Tuesday evening. While term-limits bar Reilly from running for a fourth consecutive term, an independent commission will redraw legislative borders ahead of the 2022 election, possibly eliminating the 46th District.

Further complicating matters, Carone told Deadline Detroit that she does not currently reside in the district.

“After initially telling Deadline Detroit she owned property in Lake Orion, but declining to disclose where, she later said she was shopping for a house,” the report stated. “A candidate committee formed last week lists its address as a UPS location on South Baldwin Road. Its depository is in McLean, Virginia, outside Washington.”

Despite failing to substantiate any of her claims about rampant voter fraud, Carone told Detroit News on Tuesday that she was “running on election integrity.”

Carone testified before the Michigan House and Senate Oversight Committees in a “stunt hearing,” saying she worked a 24-hour shift providing IT support for Dominion voting machines at Detroit’s TCF Center on election day. She also submitted an affidavit in November claiming she witnessed individual ballots being scanned multiple times; she claimed thousands of ballots were being hidden in the vans used to provide food for elections workers.

“Everything that happened at that TCF Center was fraud,” she declared before the Michigan lawmakers.

“Every single thing,” she added.

Footage of her testimony went viral, resulting in Saturday Night Live spoofs. In a subsequent interview, Carone clarified that she was “not drunk” during the hearing.

Dominion responded to Carone’s allegations with a scathing demand letter warning of imminent litigation for false and defamatory claims.

The company, which supplied hardware and software for voting machines across the country, said Carone engaged in a “smear campaign,” calling her claims about fraud were “outlandish” and baseless.

Dominion also took a swipe at Carone’s claims that her brief stint working for the company gave her access to any kind of special knowledge about its business processes. Instead, Dominion said Carone cleaned glass on machines for a day.

“We write to you now because you have positioned yourself as a prominent leader of the ongoing misinformation campaign by pretending to have some sort of ‘insider’s knowledge’ regarding Dominion’s business activities, when in reality you were hired through a staffing agency for one day to clean glass on machines and complete other menial tasks,” the letter stated.

As previously reported by Law&Crime, prior to appearing alongside Giuliani in Michigan, Carone had some legal troubles.

According to case records on file with the 28th Judicial District in Southgate, Mich., which Law&Crime reviewed, the original charges were first-degree obscenity and using a computer to commit a crime. Among the accusations was that Carone waged “a harassment campaign” against her boyfriend’s ex-wife, Deadline Detroit reported. The ex-wife called police several times, the report said, “after receiving three videos from an unknown email address showing Carone and her ex[-husband] having sex.”

Misdemeanor charges were dropped as part of plea deal. Carone admitted to disorderly conduct and got 12 months of probation, the Atlanta Journal-Constitution reported.