Officer Shoots and Kills Man in Backyard After Mistaking Him for Fleeing Suspect: Police 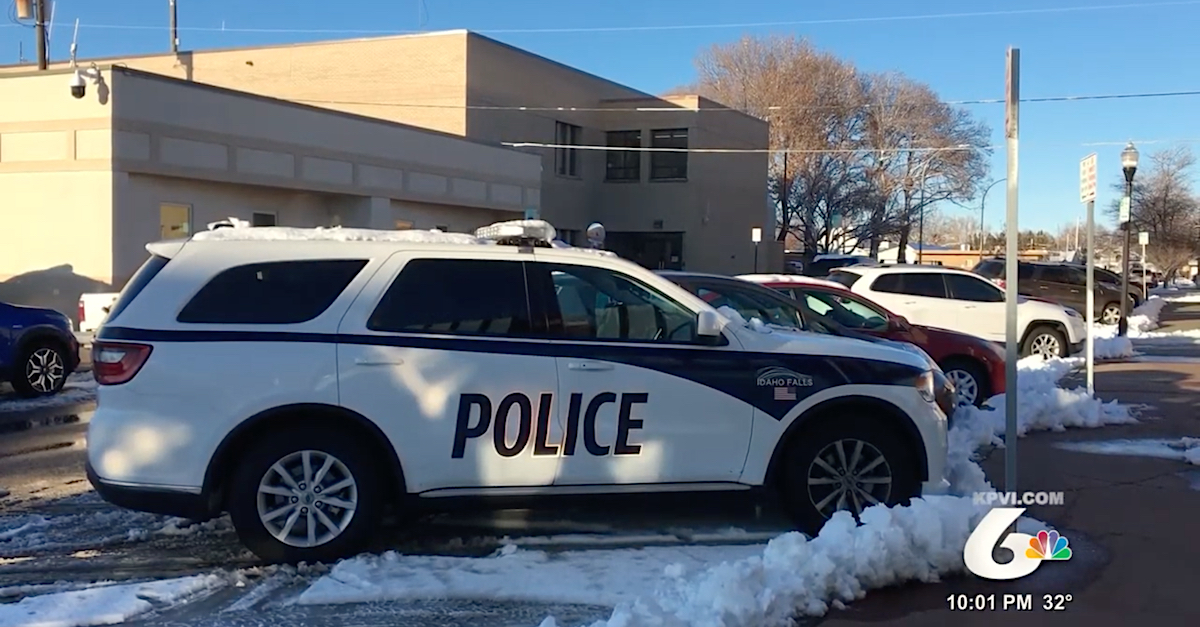 A police officer in Idaho Falls, Idaho is on administrative leave after shooting and killing a resident in his own backyard while trying to track down a completely different and unrelated suspect.  That’s according to the local police department whose officer pulled the trigger.

A lengthy press release from the Idaho Falls Police Department relates some of what occurred, but it was released along with a massive caveat:

The information shared at this time is not intended to assign blame, or to necessarily explain what occurred. There are outstanding questions to which answers are not currently available.  There is still an investigation to be done that, as explained above, will not be conducted by the Idaho Falls Police Department in order to ensure that the investigation is fair and impartial. The information below is the information IFPD believes to be factually accurate at this time.

With that disclaimer, police say the whole thing started when a Bonneville County deputy attempted to pull over a vehicle at about 12:03 a.m. Monday.  The car did stop, but the police department says “an occupant of the vehicle fled on foot into a residential neighborhood.”  The sheriff’s deputy who made the stop relayed to neighboring units a description of the man who fled — including that he was wearing a black shirt.

As officers canvassed the area, a neighbor reported that the wanted man had entered their backyard and appeared to have a gun.  Officers told others in the area that a manhunt was underway and may take some time.

“During this time, law enforcement personnel were able to identify the suspect and found that he had multiple warrants for his arrest including Felony Battery on an Officer, and two Failure to Appear Warrants with original charges of Resisting/Obstructing Arrest, and Providing False Information to Law Enforcement,” the news release says.  “The suspect also had a history of violent interactions with law enforcement.”

Another person inside the vehicle that the sheriff’s deputy pulled over started talking.  That vehicle occupant — who is unidentified in the news release — showed officers a message from the suspect who was on the lam.  Authorities used the GPS location retrieved from the message to determine that the person they were after was “in the backyard of a residence on the corner of Tendoy Drive and Syringa Drive,” the news release says.

The press release explains what happened next — but is severely lacking relevant detail:

Officers heard yelling and approached the backyard where they encountered a man wearing a black shirt armed with a firearm. Officers gave instructions for the man to drop the gun.

“We do not currently have the answers as to what exactly occurred during these moments,” said Chief Johnson. “We do know that during this interaction, an Idaho Falls Police Officer discharged his service weapon firing one shot which struck the man. Officers attempted life-saving measures but they were unsuccessful. Emergency medical personnel from the Idaho Falls Fire Department also responded and were also unable to provide any lifesaving aide to the man.”

Ultimately, officers and deputies determined that the man that had been shot was not the suspect male but was actually the resident of that address.

The man who was dead wasn’t the person they were looking for.

It is unclear if the man who was shot and killed raised his gun or otherwise placed the officer or others in fear that they would be harmed.

Sheriff’s deputies then caught a man running.  They tracked him down at another house and found him hiding in a shed.  He was arrested without further bloodshed.

The officer who pulled the trigger was wearing a body camera, and it was activated, police say.  His video — the officer is identified as male — and other videos from the scene were turned over to the Eastern Idaho Critical Incident Task Force.

The only name released thus far is that of the suspect who fled the vehicle.  He is identified as Tanner J.N. Shoesmith, 22, the alleged passenger.

UPDATE: Tanner J. N. Shoesmith was transported to the Bonneville County Jail and booked on the three outstanding warrants as well as a new misdemeanor charge for resisting arrest. https://t.co/gXothwSZBQ

The Idaho State Police are taking the lead in the ongoing investigation.

“There are no words to express how heavy our hearts are today,” said Chief Bryce Johnson said in a statement. “This situation is devastatingly tragic for the family, for the officer, and those that love and care about them. We all feel the weight of what has occurred today. Our sincere sympathies are with the family and friends of those involved, most especially the family of the deceased.”

The news release says the Idaho Falls police chief was in contact with the victim’s family “throughout the day” and that the family asked “for privacy” from the press.

Under Idaho law, officers can use deadly force in several scenarios.

“Homicide is justifiable when committed by public officers and those acting by their command in their aid and assistance,” the law says, in one of three instances.  However, under the law, the “[u]se of deadly force shall not be justified in overcoming actual resistance unless the officer has probable cause to believe that the resistance poses a threat of death or serious physical injury to the officer or to other persons.”

In other words, the degree of resistance the officer faced before he pulled the trigger will be critical in determining whether the officer was justified.

Idaho law also gives officers considerable leeway in other scenarios.  For instance, officers can use deadly force, including when “when reasonably necessary in order to prevent the escape of any person charged with or suspected of having committed a felony, provided the officer has probable cause to believe that the . . . person suspected of or charged with the commission of a felony poses a threat of death or serious physical injury to the officer or other persons.”

Other laws explain what level of force officers may use when making arrests.

Idaho also has a so-called “stand your ground” law.  It reads (in part):

(1) No person in this state shall be placed in legal jeopardy of any kind whatsoever for protecting himself or his family by reasonable means necessary, or when coming to the aid of another whom he reasonably believes to be in imminent danger of or the victim of aggravated assault, robbery, rape, murder or other heinous crime.
(2)  The defense of self or of another does not require a person to wait until he or she ascertains whether the danger is apparent or real. A person confronted with such danger has a clear right to act upon appearances such as would influence the action of a reasonable person.

Watch KPVI-TV’s report on the incident below: