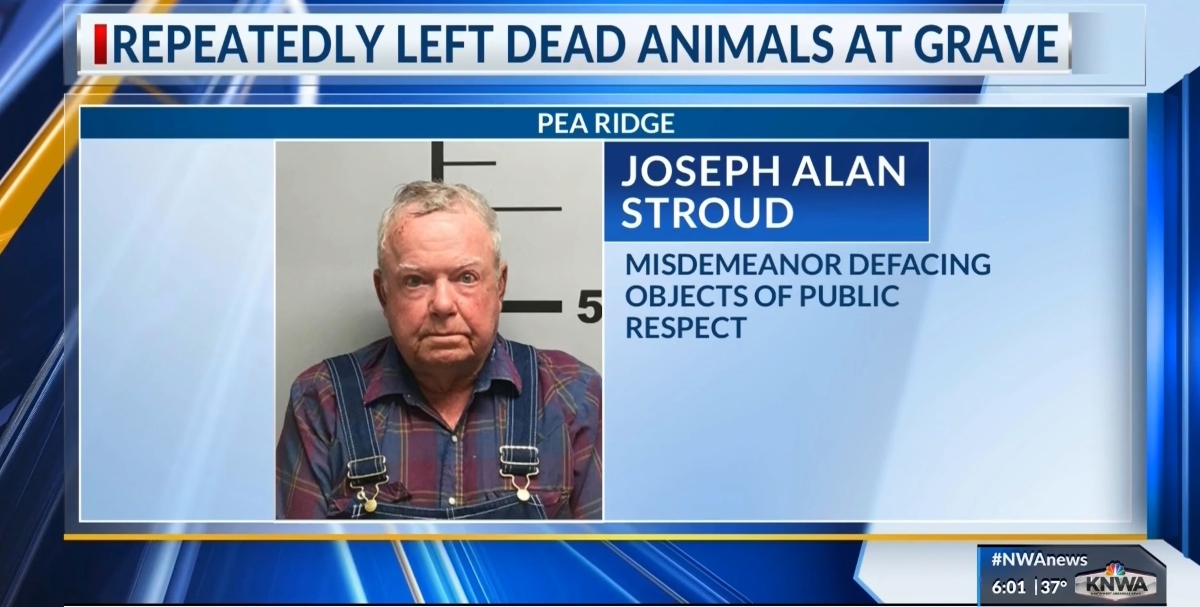 An Arkansas man pleaded guilty on Monday to placing dead animals on his late neighbor’s grave. As part of his plea deal, Joseph Alan Stroud, 79, would only have to admit to misdemeanor defacing objects of public respect, not the felony version, according to The Arkansas Democrat-Gazette. In court he insisted he did it for the sake of the dead man, but the judge did not buy it, as that account also clashed with the backstory.

Stroud received a suspended sentence of one year and was given a 30-day deadline to pay $2,529 in restitution to replace the headstone.

According to the probable cause affidavit obtained by Law&Crime, police were called on July 31, 2020. An officer spoke with Shannon Nobles, the granddaughter of the late Fred Allen McKinney. She said that around May 31, her family began finding dead animals on her grandfather’s grave. They first believed it was just a coincidence — that perhaps the animals were dying after eating fake floral arrangements. But it kept happening. They came to believe someone was doing it on purpose.

The family got the cemetery’s permission to set up game cameras at the headstone. Over the next several months, they recorded a person walking up to the gravesite, putting a dead animal on a headstone, and walking back to his vehicle, a gray, newer-model Dodge Journey.

It was a man, but police said he looked like he was trying to disguise himself because he was wearing a woman’s windbreaker jacket, sunglasses, and a woman’s wig.

Nobles said she determined it was Stroud when she noticed the Dodge Journey while driving by the cemetery one day. She followed it to a Walmart, where she took pictures and recognized the driver as the defendant.

Nobles said that the family had removed a total of 16 dead animals from their grandfather’s gravesite since the ordeal started, including one that was draped over the headstone and left a brown stain in its trace. She said she was on her morning run on July 31 when she saw Stroud leave the cemetery in his Dodge Journey. She discovered a dead possum on the grave and eight live baby possums inside one of the flower vases to the side. That’s when Nobles called it in.

There’s a bit of a backstory here. For one, Stroud’s late wife is nearby in same row of gravesites. Second, both he and McKinney had clashed before, according to at least one account. Nobles said the two men never got along. She said there was even a lawsuit between them, which she believed Stroud lost.

In any case, police at the time said they confirmed Nobles’ account, in part citing similar apparel worn by both Stroud and the vandal. An officer also found a bath towel in the defendant’s Dodge Journey. The item was stained with what seemed to be blood.

In court, the defendant insisted he left the dead animals there for McKinney’s sake.

“I done it for his behalf to show him the animals were still here and everything like that,” he said, according to the Democrat-Gazette. “He just enjoyed animals and that there was more of a . . . a beauty than flowers an stuff.”

“If you were honoring him why would you wear disguises and sneak in and out of the cemetery to put the dead animals on his grave?” Benton County Circuit Judge Robin Green said.

Stroud’s answer was to assert that he was just trolling by wearing disguises.

Green sounded skeptical about the plea deal — and even wondered if Stroud was being honest with her.

Deputy prosecutor Tyler Hawkins defended the plea deal, saying the family supported it and was seeking the money to replace the permanently stained headstone. He noted that the plea was offered because the defense provided a neurologist’s report diagnosing Stroud with vascular dementia, which gave the defendant the founding to pursue a mental health evaluation.

Despite Stroud’s purported mental condition, his attorney, Alison Lee, maintained the defendant understood that what he did was wrong and that he wanted to get the money to the family. She said she thought he understood the gravity of the situation, and that she would have filed for a mental evaluation if she didn’t think he could understand the legal ramifications of the matter.

The judge accepted the plea on the condition that Stroud give up his driver’s license because of his documented dementia.  He could be dangerous driving, the judge reasoned, and he could drive to engage in illegal behavior again.

[image via screen capture from KNWA-TV]