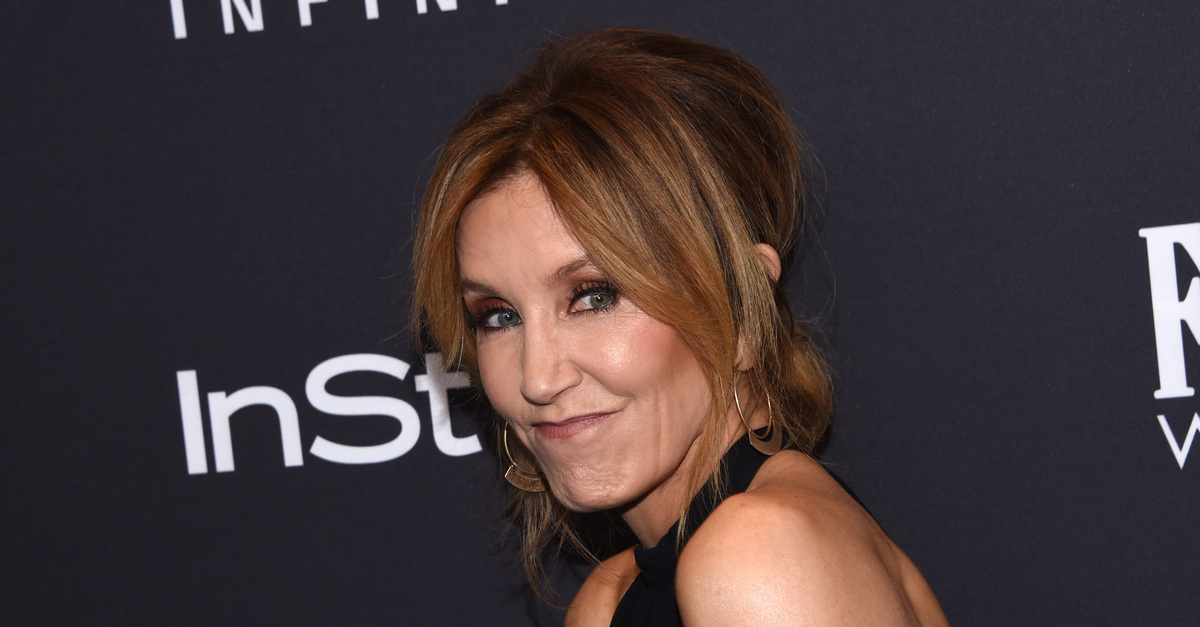 Golden Globe-nominated actress Felicity Huffman worked in Hollywood for two-and-a-half decades before lightning struck, not once but twice, in roles on Desperate Housewives and the critically-acclaimed film Transamerica. According to federal prosecutors, Huffman and her husband William H. Macy wanted a more expeditious end-run toward success for their daughters–and they went about it by paying someone to doctor SAT results.

According to the 204-page complaint filed by the U.S. Attorney for the District of Massachusetts, “Huffman and her spouse made a purported charitable contribution of $15,000 to [William Rick Singer‘s charity The Key Worldwide Foundation] to participate in the college entrance exam cheating scheme on behalf of her oldest daughter. Huffman later made arrangements to pursue the scheme a second time, for her younger daughter, before deciding not to do so.”

Singer is the government’s chief cooperating witness in what the Department of Justice is calling the “largest college admissions scam ever prosecuted” by the agency. In conversations with investigators, Singer dished on the Huffman-Macy aspect of Tuesday’s wide-ranging indictment:

“Ruh Ro! Looks like [my daughter’s high school] wants to provide own proctor,” Huffman allegedly emailed Singer, who wrote back, “We will speak about it.”

This little hiccup was quickly smoothed over.

“In subsequent e-mails, Singer and Huffman agreed to tell the high school counselor that Huffman’s daughter would take the SAT at a different location on December 2nd and 3rd [in 2017]—a Saturday and Sunday—so that she would not miss any school,” the filing notes.

An employee of Singer’s then “purported to proctor [Sofia Grace Macy’s] SAT exam at the West Hollywood Test Center” in December 2017. According to interviews with investigators, this employee said “that each time he was in Los Angeles to proctor an SAT or ACT, he facilitated cheating, either by correcting the student’s answers after the test or by actively assisting the student during the exam.”

The alleged faux-proctoring scheme was apparently a success.

“Ultimately, [Sofia Grace Macy] received a score of 1420 on the SAT, an improvement of approximately 400 points over her PSAT,” the government’s long and winding affidavit reads.

In February of 2018, Huffman and Macy “made a purported contribution of $15,000” to The Key Worldwide Foundation.

One month later, the power couple received a letter from Singer’s bookkeeper Steven Masera which the government claims “falsely stated” the reason for the $15,000 payment was a donation to help fund “self-enrichment programs” for “disadvantaged youth” and that “no goods or services were exchanged.”

In late 2018, Singer advised Huffman that if she wanted to re-enact the alleged cheating scheme with her younger daughter, he would need “at least three weeks’ notice.”

According to a transcript of that phone call, Huffman was open to the idea.

“I won’t know until she takes that–the practice test, of when we should take it,” Huffman allegedly told Singer. “I mean, unless you want to play it safe and do it in March.” The two then agreed on a tentative December test date.

One month later, Huffman allegedly “confirmed that she wanted to proceed with the cheating scheme, but probably only after her daughter first took the exam on her own, without cheating,” according to the government’s affidavit.

Singer appears to believe this was a strategic move on Huffman’s part:

[Singer] has advised law enforcement agents that, in such instances—when parents had their children first take the exams by themselves, to see how they scored without cheating—[Singer] would typically direct [his test-taking employee] to ensure that their second score did not increase by more than 30 percent from the first “baseline” score, in order to avoid any suspicion of cheating.

Things seemed to moving forward in much the same allegedly untoward direction.

In December 2018, Huffman and Macy allegedly spoke with Singer about their plans to go forward with the cheating scheme. During this call, Singer said the doctoring proctoring session would have the same $15,000 price-tag and inquired as to whether Georgia Grace Macy would also be using extra time to facilitate the answer-changing scheme. Huffman allegedly agreed that two days was better than one.

During a February call, however, Huffman expressed doubts as to whether “a dramatic increase in her daughter’s scores would cause her SAT tutor to suspect cheating.”

“I wouldn’t worry about that,” Singer told Huffman. But apparently the worrying kept up.

In the end, Huffman and Macy decided against using Singer’s services a second go-round.

Macy, notably, is not a named defendant in the indictment.