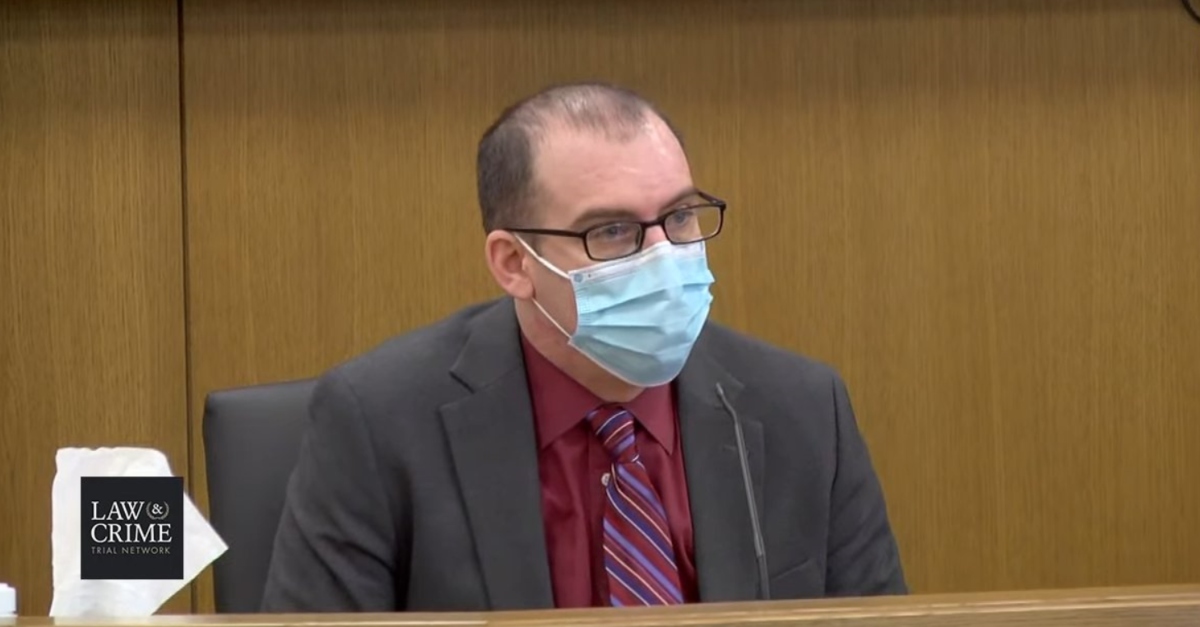 Joshua Aide, the Wisconsin man on trial for trying to kill his ex-girlfriend Rebecca Borkowski and her family friend John Miller, as well as murdering her father James Gruettner, denied on the stand Wednesday that calling her 49 times on the day of the incident was obsessive.

#JoshuaAide – Cross: You called Rebecca 49 times that day?
Josh: I did
Prosecutor: You would agree that’s obsessive behavior?
Josh: I would not agree.@LawCrimeNetwork pic.twitter.com/WQz3EhenFM

The defense is trying to show that the victims ambushed Aide, 40, and he fired back in self-defense. They maintained that this happened after the defendant displeased Borkowski by refusing to sell his late father’s house in 2019.

Prosecutors said it was Aide who did the ambushing while the victims were trying to fix a vehicle.

#JoshuaAide – Important to note, Josh testifies Rebecca had a gun pointed at him and that’s why he had to shoot her. We’ve seen body cam footage, police arrive, Rebeeca is on the ground with a bullet in her head. No gun found. @LawCrimeNetwork

The only thing both sides really agree on is that the shooting happened after Borkowski, 33, ended a 5-year relationship with Aide. The former couple co-owned a Tahoe that had radiator trouble. Borkowski said she was going to have it fixed. Miller, a 57-year-old friend of her family, came over to help that day on August 4, 2020. The defendant, however, did not want them working on the vehicle.

Aide asserted on the stand that Gruettner, 59, began shoving and punching him, and he fired to protect himself. He claimed to fire at Miller after the man tried to hit him in the back with something. Finally, he said he shot Borkowski, who raised a weapon toward him.

Naturally, this is a 180 from the story presented by the survivors, who said Aide showed up and opened fire.

#JoshuaAide – Rebecca says they were working on the car when Josh showed up. He said, “boo!” She turned around and there was a laser pointed in the middle of her forehead. next thing she knew she fell and woke up seeing an officer. She saw her lying next to her @LawCrimeNetwork pic.twitter.com/E5glpQtUTJ

#JoshuaAide – John Miller testifies he is a friend of James Gruettner & his wife. James asked him to help work on a vehicle for his daughter, Rebecca. While there, the Aide showed up. He heard “pop, pop”, turned around, red laser on his face, he was then shot. @LawCrimeNetwork pic.twitter.com/A7DdQeg97Y

The only “conspiracy” the victims were part of was giving Joshua’s property back to him to get him out of Rebecca’s life, the state says. From the prosecution’s case on Monday:

#JoshuaAide – Now discussing what prosecutors say led to the shooting. Josh and Rebecca co-owned a Tahoe. It needed work on it before she could get it to the defendant’s house. Josh told her not to have anyone else work on the vehicle. @LawCrimeNetwork pic.twitter.com/zRTpBNNL4Y

The prosecution pressed Aide on Wednesday regarding the dozens of phone calls he admittedly made to Borkowski on the day of the shooting. He asserted that he had T-Mobile as a service, and did not know if the calls went through. The state brought up that Rebecca only called him three times that day, with the last call with him being at 5:30 p.m. When driving to the site of the shooting in Oshkosh, from 6:36 p.m. to 8:04 p.m., Aide tried to reach her 31 times. The prosecution suggested he was angry she was not answering her phone. Aide maintained that this was normal behavior for her.

In discussing the prior relationship, the defendant insisted that he did not ask to get back together with her, but just wanted to understand why she left him.

According to testimony and evidence, Aide noted that another man interacted with her on Facebook. Borkowski, obviously annoyed, said that it seemed like the defendant was “stalking” her.

#JoshuaAide – The day before the shooting these messages were exchanged between Rebecca and the defendant.
Josh: I really thought you were going to be my life partner, friend and spouse@LawCrimeNetwork pic.twitter.com/nBRsRGfzQz

#JoshuaAide – Day before shooting messages:
Josh: No response back? Yet you can reply to Joseph Josef?

Rebecca: Josh what the f***. Why do I always need to explain myself to you. We are nottttt together.@LawCrimeNetwork pic.twitter.com/LbBQaruGCu

After Miller got involved with the Tahoe repair, Aide asserted that the older man was romantically with Borkowski.

“You have issues,” she wrote in reply. The defendant wanted the car fixed by a professional mechanic. Borkowski said no, stating that everyone was booked and that she wanted the vehicle gone by the weekend.

#JoshuaAide – Rebecca gives Josh Jon Miller’s phone number saying he’s going to help replace the radiator on the Tahoe so she could get the Tahoe to Josh. Josh then accuses her of Jon being her new boyfriend. @LawCrimeNetwork pic.twitter.com/HY87Yhq6Pp

During her testimony, Borkowski detailed a relationship filled with physical abuse by Aide.

#JoshuaAide – In 2016 she was living with the defendant, they were drinking. Joshua got angry. She got scared and tried to grab her keys. She said he tried to stop her and then ended up on the floor. Shows photo of rug burn she sustained during the fight @LawCrimeNetwork pic.twitter.com/b9Bm65Fv2X

Rebecca: Josh I don’t want what we had. We had a long distance relationship for 5 years. Alcohol, verbal/physical abuse and fear is not what I want in my life.@LawCrimeNetwork pic.twitter.com/LopUjCoWod