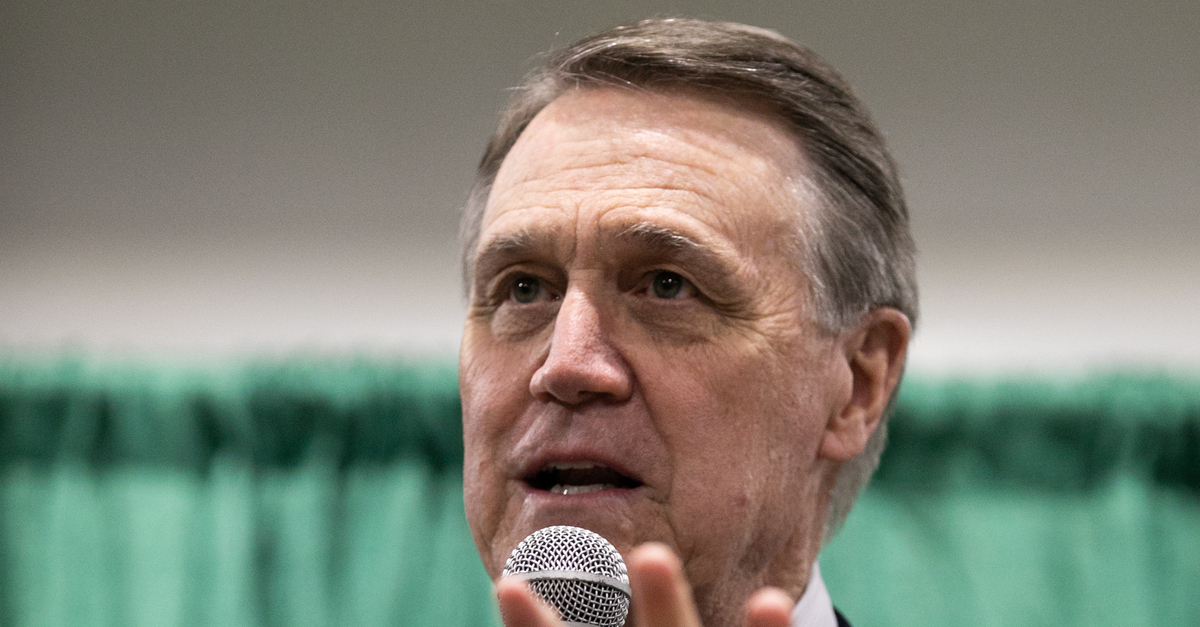 .S. Sen. David Purdue (R-GA) speaks to the crowd of supporters during a “Defend the Majority” rally at the Georgia National Fairgrounds and Agriculture Center on November 19, 2020 in Perry, Georgia. Purdue is facing Democratic U.S. Senate candidate Jon Ossoff in a January 5th runoff race.

Georgia Republican Senator David Perdue was questioned by the Federal Bureau of Investigation (FBI) over a series of suspicious and highly lucrative stock trades earlier this year.

FBI agents reportedly “spoke with” Perdue in June of this year, “asking him questions about his financial transactions,” according to two anonymous sources said to have “knowledge of the conversation,” according to The New York Times.

The federal investigation into Perdue was initiated around the same time as several senators from both parties were being scrutinized by the U.S. Department of Justice (DOJ) over their own suspicious financial transactions that occurred after a series of secret congressional briefings about the severity of the novel coronavirus (COVID-19) and the deadly pandemic that was to follow.

Law enforcement appears to have cast an askance eye toward stock trading in the U.S. Senate in general following those bombshell disclosures and the scandals that ensued–leading up to their interest in Perdue’s own trades, which appear to be unrelated.

Perdue’s suspicious trades concern the company Cardlytics, a self-described “purchase intelligence platform” which is responsible for many, if not most, of the banner advertisements and “offers” users see as they log into their online banking account portals.

Perdue previously served on the board of directors for the company and sold $1 million worth of stock earlier this year. Six weeks after that, the company’s founder announced he would no longer serve as CEO and forecast stagnant growth in the near future. The share price eventually scraped the bottom and was trading at $29 by March. Perdue bought the dip and re-staked most of his position in the company. Cardlytics share price is now over $130.

Investigators looking at potential insider trading in the Senate were keen to know more. And they found enough to warrant scrutiny.

“David, I know you are about to do a call with David Evans,” the company’s then-CEO Scott Grimes wrote in an email to Perdue in late January–just before Perdue made the trades. “As an FYI, I have not told him about the upcoming changes. Thanks, Scott.”

“I don’t know about a call with David or the changes you mentioned,” Perdue wrote back, saying that he would check with his scheduler to see if he had missed something. Grimes wrote back to apologize–saying he sent the original email to the “Wrong David.”

What Perdue apparently didn’t miss was the weighty subtext of that two-word phrase: “upcoming changes.”

After receiving the email, the Georgia Republican contacted his Goldman Sachs wealth manager, Robert Hutchinson, and made the expertly-timed $1 million trade, eventually setting off alarm bells in Atlanta and Washington, D.C.

And, according to one of the anonymous sources, the FBI later came into possession of the conversation–which was “memorialized in an internal Goldman Sachs record”–between Perdue and Hutchinson.

From the Times report:

Investigators in Washington began scrutinizing Mr. Perdue in the spring; by June, the U.S. attorney’s office in Atlanta was handling the case along with prosecutors in the department’s criminal division in Washington.

Mr. Hutchinson told the F.B.I. that Mr. Perdue and his wife weighed in only on broader investing issues, like the proportion of stocks and bonds to hold in their portfolio, according to a person with knowledge of his interview. But a person familiar with the senator’s money-management arrangements with Goldman Sachs said that Mr. Perdue retained some degree of discretion over which trades were made and when.

Perdue was eventually cleared by the DOJ and the Securities and Exchange Commission. He briefly alluded to those clearances in a recent campaign commercial, but the senator’s omission of being questioned by the FBI is likely to provide ample fodder for his political opponents during the upcoming run-off election where he is currently locked in a tight race with Democrat and former documentary filmmaker Jon Ossoff.