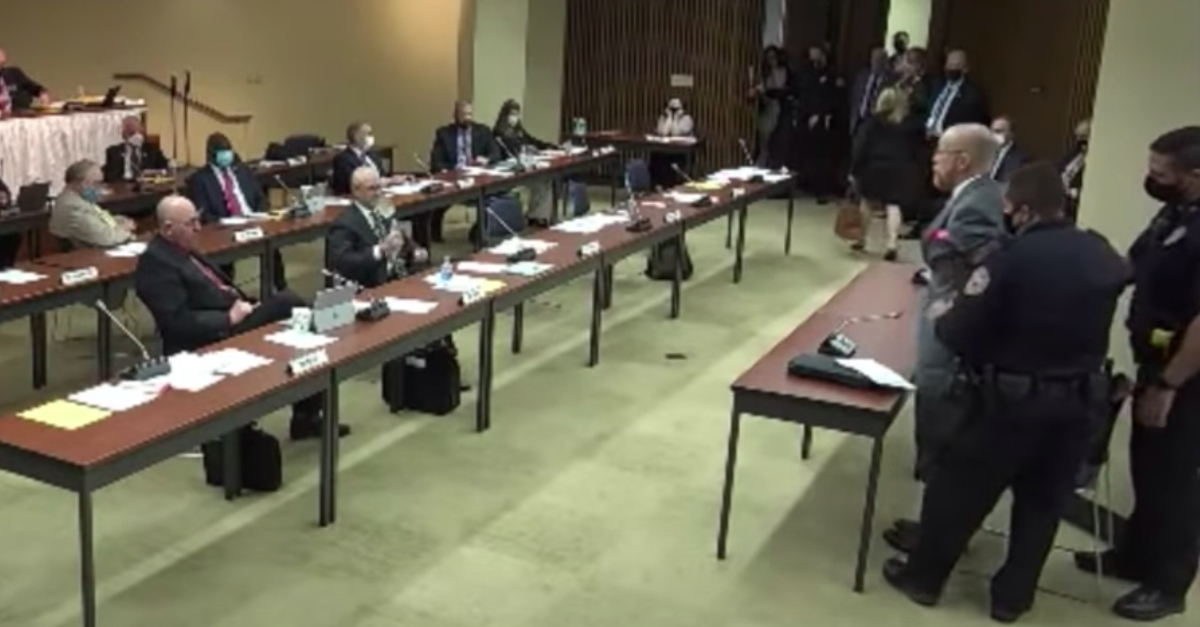 The concerned father of a transgender child in Arkansas was arrested after their testimony in opposition to a bill targeting transgender youths went approximately 30 seconds over their allotted time.

Chris Attig, who uses the gender-neutral pronouns they/them, appeared before lawmakers in the Arkansas statehouse on March 9 to read prepared remarks in opposition to HB1570, also known as the Arkansas Save Adolescents from Experimentation Act (SAFE Act), which bans gender-affirming medications or procedures for transgender minors.

The measure, which the legislature passed earlier this month by overriding Gov. Asa Hutchinson’s (R) veto, prohibits physicians and other healthcare professionals from performing any gender transition procedures or providing any drug treatments that include hormone therapy or puberty blockers to persons under the age of 18. Doctors are also barred from referring minor patients to other healthcare providers for such treatments.

Attig began their remarks with a message to the transgender youths of the state, saying, “No matter what happens here today, you are loved.”

Attig, who is a licensed attorney and legal advocate for veterans, then said the bill was unconstitutional in light of the landmark Supreme Court decision Bostock v. Clayton County.

After exactly two minutes, Rep. Jack Ladyman (R) interrupted Attig, saying, “Your time is up,” then cut their microphone. Attig appears to continue speaking but is no longer audible in the video. Ten seconds later, Ladyman asks the State Capitol Police to “remove him from the table.”

“It was just shocking sitting there in jail thinking that this is what happens when you speak to people about how their proposed laws are affecting your children,” Attig said Tuesday in an interview with LGTB+ publication them. “They don’t want to hear it. They put you in jail.”

According to a report from LGBTQ Nation, Attig was then jailed for several hours and hit with a charge of disorderly conduct.

Attig also said that only people who were speaking in opposition to HB1570 were held to the strict two-minute time limit while representatives from far-right groups such as the Alliance Defending Freedom and the Family Research Council were permitted to hold the floor for as long as 40 minutes.

“Whether or not these laws are targeted at somebody above or below the age of 18, the singular message that they send is it is OK to bully and persecute people who are trans,” Attig said in their interview. “It says, ‘The legislature is doing it, why can’t I?’”

See the video of Attig’s testimony and arrest below.