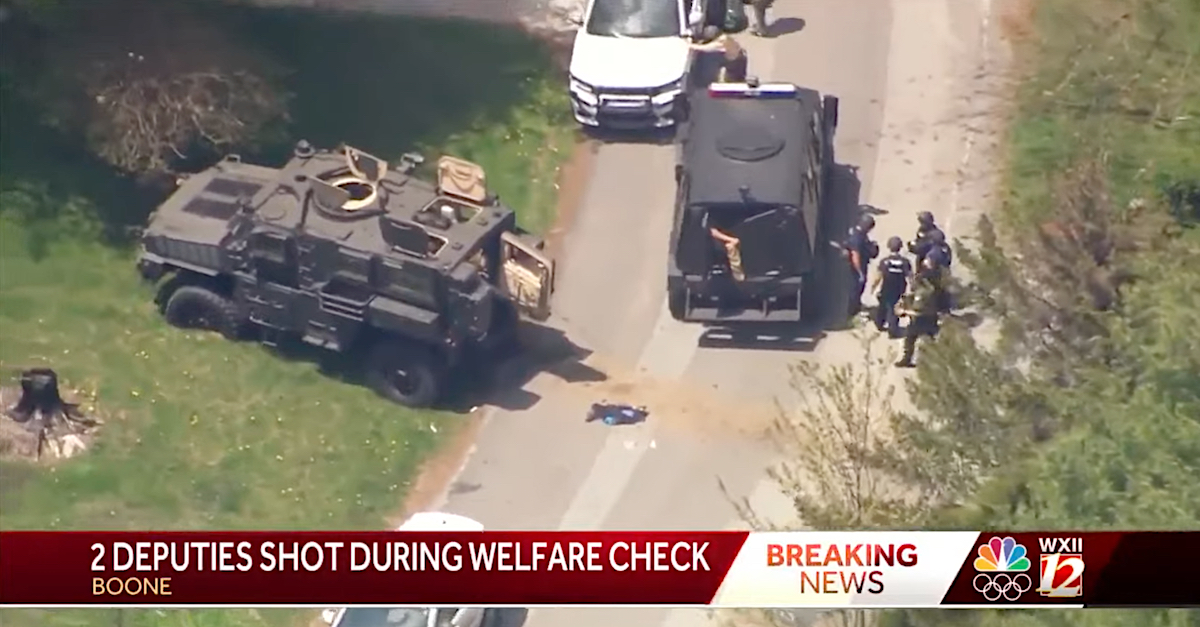 Two North Carolina sheriff’s deputies were killed in the line of duty Wednesday during a thirteen-hour standoff, the Watauga County Sheriff’s Office announced Thursday morning.A suspected gunman killed two others before he is believed to have killed himself.  A local police officer was also shot in the head during an attempt to rescue the fallen sheriff’s deputies, but a helmet saved his life; the police officer was reportedly uninjured.

The events unfolded Wednesday in Boone, N.C., about an hour and a half west of Winston-Salem and near the Tennessee border. According to The Associated Press:

The Watauga County Sheriff’s [O]ffice said Sgt. Chris Ward and K-9 Deputy Logan Fox were dispatched to a home in Boone at 9:44 a.m. Wednesday after the homeowner and his family didn’t report to work or answer telephone calls. Both were hit by gunfire. Other officers were able to pull out Ward, who later died at a hospital. Fox died at the scene.

Deputies are gathering supplies, putting on more protective equipment. It has been a couple of hours now since we had a formal update. We’ve watched members of law enforcement come in pic.twitter.com/EWbsetTkAw

Reporters also captured the long and difficult efforts to save the deputies who were gunned down. Reports indicate the gunman would intermittently fire at the police throughout the ordeal.

We know two deputies have been shot. We expect to learn more in the next hour @wsoctv pic.twitter.com/sCcb49vi2c

The names of the other three victims have not yet been released, but local news reports indicate that the gunman shot his mother and stepfather. Charlotte, N.C. ABC affiliate WSOC-TV said police had been to the home where the shooting occurred over the weekend, but details of that encounter remain unclear.

Shocked officials in the rural county — total population 56,000 — struggled to make sense of the chaos which enveloped their community.

Breaking Boone- sheriff Hagaman just spoke with us confirming the second deputy has died. They also found the suspect’s mother and stepfather deceased. Police had been to the home over the weekend. The latest on the investigation today at noon, 5pm and 6pm. pic.twitter.com/uV0WlhTnOX

“This is an incredibly tragic situation and our thoughts and prayers are with everyone involved as well as their families and our community,” Sheriff Len Hagaman said in a widely reported statement. “I greatly appreciate the tremendous support we are receiving from law enforcement agencies across the region and the state.”

Lots of law enforcement parked, driving on Browns Chapel Road in Watauga County. We’re told not to stop and head to a media staging area at a church nearby @WXII pic.twitter.com/nygx6udnGG

A GoFundMe campaign has been established for Ward’s children.

A look at the procession for Sgt. Chris Ward, the Watauga County Deputy who was killed in the line of duty.

Investigators told us Deputy Logan Fox was shot — though we’re waiting for an update on his condition @wsoctv pic.twitter.com/BtzuAMTYkx

Politicians from both parties tweeted condolences.

The loss of Sergeant Chris Ward is heartbreaking not only for the Watauga community, but also for those who proudly serve in law enforcement.

My sincerest condolences to his loved ones during this difficult time. May his memory always be a blessing.

This is truly saddening news. May God continue to bless the countless law enforcement officers who put their lives on the line to protect our communities. We will never forget their service.

Our thoughts and prayers are with the families of Chris Ward and Logan Fox along with their extended Watauga County Sheriff’s Office family and friends who are grieving from this tragic and heartbreaking event.https://t.co/zjCmmi3jHP

Local residents also stopped by the sheriff’s department to pay their respects.

EMOTIONAL:
A group of young men are outside of the #WataugaCounty Sheriff’s Office praying for the shooter, and those deputies killed in last night’s standoff.
RIP Sgt. Chris Ward and Deputy Logan Fox. @FOX46News pic.twitter.com/gjimWUJm3c

[image via screen capture from WXII-TV]