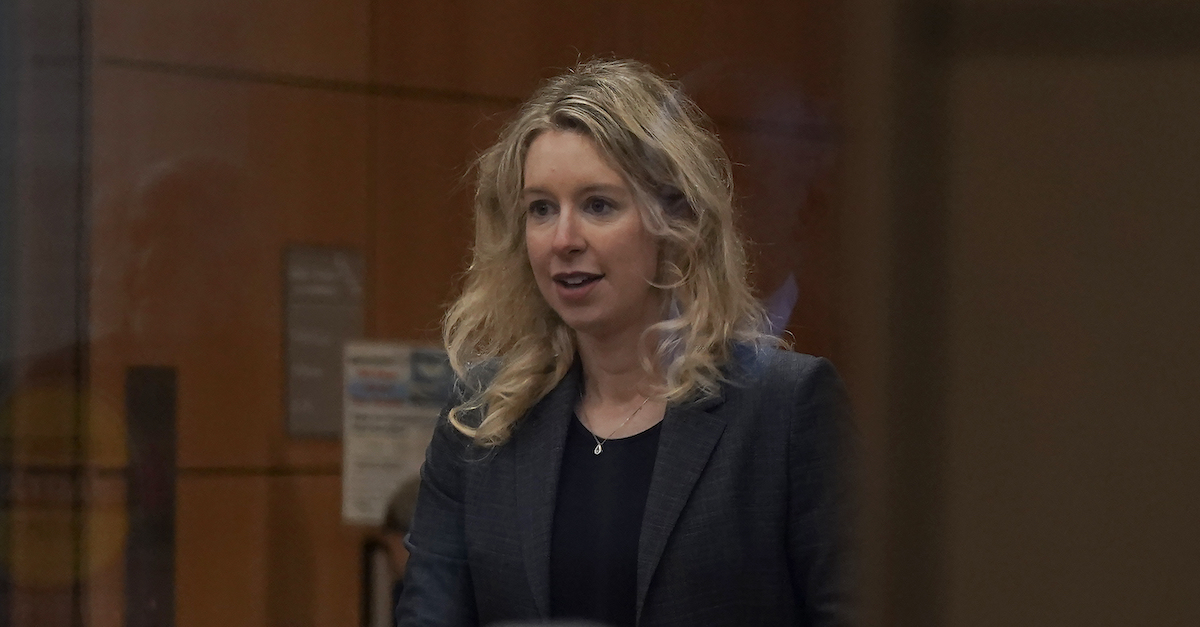 Federal prosecutors have asked a judge to keep convicted fraudster Elizabeth Holmes in custody as she pursues her appeal, citing a planned trip to Mexico as a veiled attempt to flee the country.

Holmes, who was convicted in January 2022 on four counts of wire fraud and conspiracy to commit wire fraud, has been sentenced to serve 135 months in prison. She was found guilty of defrauding investors of millions with false claims about her blood-testing company, Theranos

She is due to self-surrender in April to start her sentence. However, she has asked U.S. District Judge Edward John Davila for permission to stay out on release pending appeal, citing “strong ties to her partner and family, including her son and soon-to-be-born child.”

“There are not two systems of justice — one for the wealthy and one for the poor — there is one criminal justice system in this country,” the government wrote in its opposition to Holmes’s motion.” And under that system, the time has come for Elizabeth Holmes to answer for her crimes committed nearly a decade ago, as found by a jury made up of a fair cross section of individuals from this community, and to begin serving the term of imprisonment imposed by this Court as sufficient but not greater than necessary to account for those crimes.”

The government points to the fact that in January 2022, Holmes had booked a one-way ticket to Mexico.

“The government became aware on January 23, 2022, that Defendant Holmes booked an international flight to Mexico departing on January 26, 2022, without a scheduled return trip,” the government’s motion says. “Only after the government raised this unauthorized flight with defense counsel was the trip canceled.”

An email exchange between Assistant U.S. Attorney Jeffrey Schenk and defense lawyer Lance Wade was attached to the filing.

Recently, the government became aware that Ms. Holmes has a reservation for international air travel, scheduled to depart in the next few days. Ms. Holmes did not provide the government notice of this travel, nor obtain approval from the Court. In light of her current bail conditions, we find this concerning. We chose to bring this information directly to your attention, with the hope that by 11am PST tomorrow (Monday, 1/24), you could provide proof that the international portion of her 1/26 travel reservation has been cancelled.

Separately, we are considering asking the Court to schedule a bail review hearing to discuss this issue. Before we do that, and to help us evaluate the seriousness of this action, we are hoping you could provide an explanation for this conduct. We assume Ms. Holmes remains aware of her release conditions. Nevertheless, we would appreciate any context you can provide as we assess the need for Court involvement.

According to Wade, it was just a misunderstanding.

Thanks for raising this with us. I will gather all of the details and provide the specifics tomorrow. In general, this was a reservation that was made before the verdict. The hope was that the verdict would be different and Ms. Holmes would be able to make this trip to attend the wedding of close friends in Mexico. Given the verdict, she does not plan to take the trip — and therefore did not provide notice, seek permission, or request access to her passport (which the government has) for the trip. But she also had not yet cancelled the trip, amidst everything that has been going on. We will have her do so promptly and will provide you confirmation of that tomorrow. I will provide additional specific information tomorrow am as well, but feel free to call me with questions.

While Holmes didn’t end up taking the trip, her partner did, prosecutors say, adding an insinuation that Holmes may have tried to flee if the government hadn’t caught on to the travel plans.

“Defendant’s partner, William Evans, left on the scheduled date with a one-way ticket and did not return until approximately six weeks later, returning from a different continent,” the government’s filing says. “The government anticipates Defendant will note in reply that she did not in fact leave the country as scheduled—but it is difficult to know with certainty what Defendant would have done had the government not intervened.”

Government attorneys say that the Mexico trip isn’t the only indication that Holmes may try to give authorities the slip. She has told law enforcement that she currently lives on an estate where the monthly expenses exceed $13,000 per month, but listed her and Evans’ salary as “$0.”

“Nevertheless, at the same time when her incentive to flee has never been higher, Defendant has requested the Court ease the restrictions on her travel, permitting her to travel outside of the Northern District of California and perhaps out of the state altogether ‘due to her significant other’s employment,'” prosecutors argue, adding that Holmes “has both the means and the motive to flee.”

Prosecutors also argue that Holmes poses an economic threat, citing her “resourcefulness” and apparent lack of remorse as reasons to keep her in custody.

“Defendant shows no indication of changing course — the statements she provided to the Probation Office list patents she either holds or intends to work on as potential future sources of income,” the filing says. “Finally, despite the breadth of her conduct, Defendant has not acknowledged the fraudulent nature of her conduct, rendering it more likely that she will repeat it in the future.”

The filing also says that Holmes is not likely to succeed on appeal and that she does not raise any “substantial question of law or fact” that would result in reversal of her conviction.

Holmes’ co-defendant and one-time boyfriend Sunny Balwani was convicted of 10 counts of wire fraud and two counts of conspiracy to commit wire fraud. Balwani has been sentenced to 155 months in prison.

Read the government’s filing below.