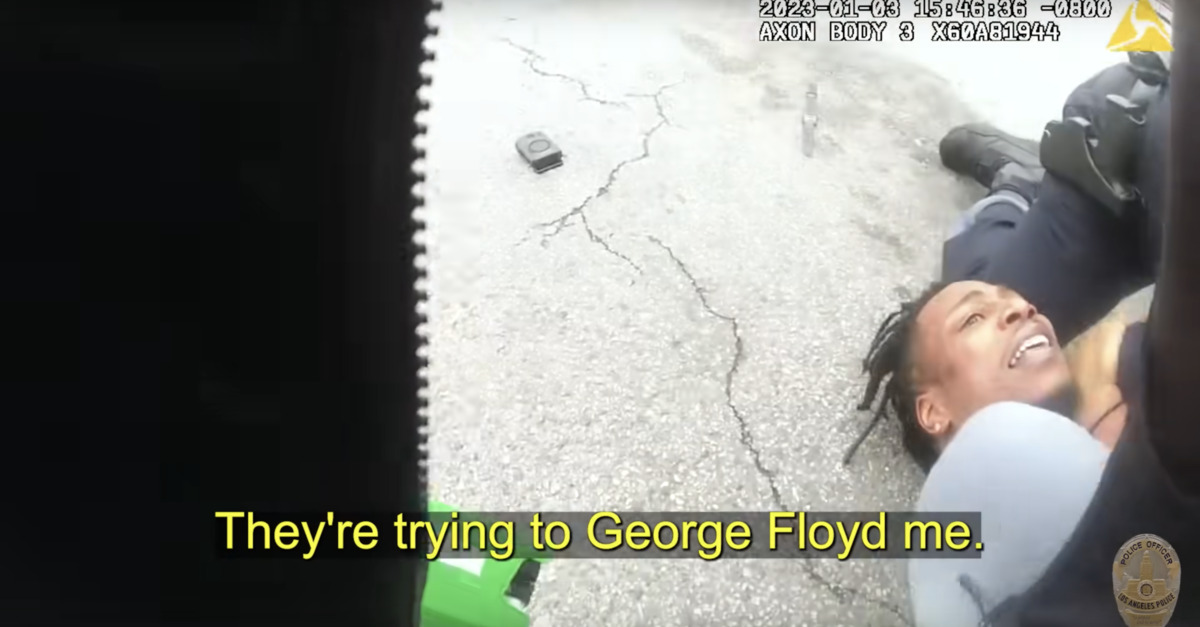 A still image from a body camera footage shows the moments Keenan Anderson invoked the name of George Floyd during a Jan. 3, 2023 incident in Venice, Calif.

The family of Keenan Darnell Anderson, who died after being stunned by a Taser in a confrontation with LAPD officers, has filed a $50 million claim against the city, lawyers announced on Friday.

Anderson, 31, went into cardiac arrest and died on Jan. 3 after Los Angeles police shocked him with a Taser multiple times while they responded to a traffic crash in Venice. Anderson, a cousin of Patrisse Cullors, a co-founder of the Black Lives Matter movement, died in the same week that LAPD officers were involved with two other men in confrontations that prompted protests, calls for the police chief’s ouster and reforms of the department.

At a news conference on Friday, attorney Carl Douglas stood next to Anderson’s 5-year-old son announcing the claim, a precursor to a lawsuit.

“And that’s correct because, on Jan. 3, 2023, something really bad did happen. And $50 million is never gonna bring his daddy back to him.”

Anderson died at a hospital four hours after the confrontation. LAPD Chief Michel Moore said in a news conference last week that as the investigation continues, he would be paying close attention to the use of the Taser.

In a statement Friday, the Los Angeles Police Protective League, the union that represents LAPD officers, said Anderson escalated the incident when he ran away from officers. They called on Moore to release the 7 minutes of body-worn camera video showing the incident that was not included in the public release.

“Minor auto accidents are usually handled with an exchange of information between the drivers and a call to one’s insurance carrier,” the statement said. “On the other hand, when an individual who is high on cocaine is in an accident, tries to open the car door of an innocent driver, and then flees the scene by running into traffic, police officers must act.”

“We believe the missing video will confirm that Mr. Anderson was the one who escalated this tragic incident that his family and Mr. Crump are now trying to shamelessly profit from,” the union said in the statement.

Douglas said that Anderson responded the way other Black men would have in a similar situation.

“And that fear drove him to run into the middle of the street,” he said. “And what did he do then? He was again compliant on the ground in a submissive position.”

“Three trained killers, because that’s what trained officers are, were unable to handcuff an unarmed man without having to Taser him six separate times on the back side of his heart,” He added.