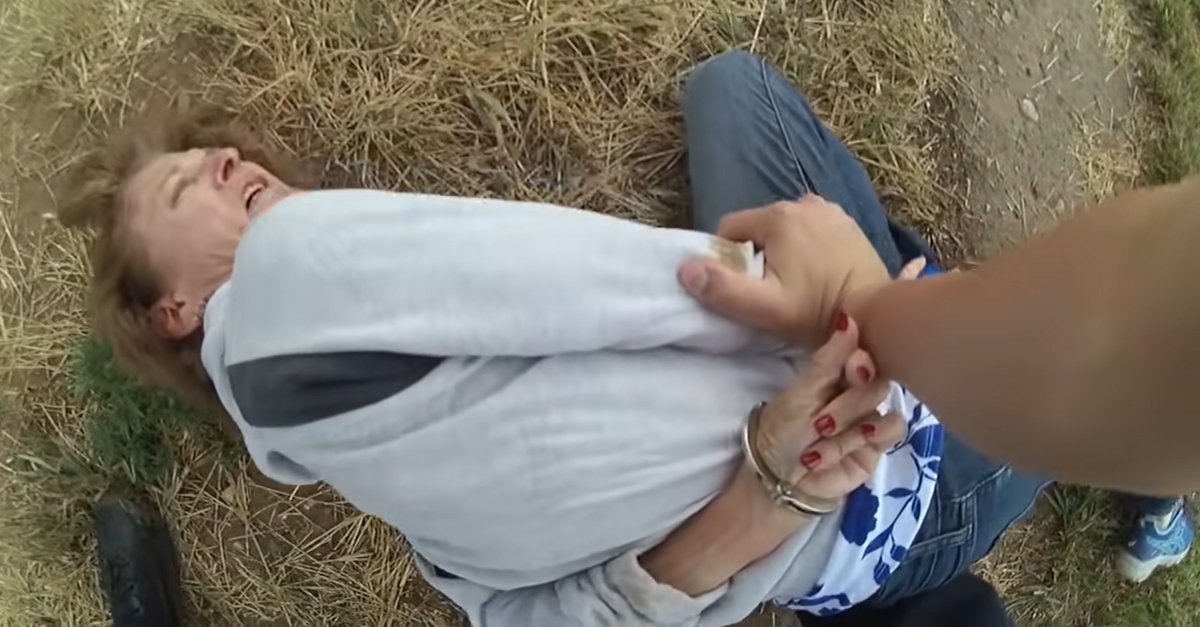 Karen Garner, a 73-year-old Colorado woman with dementia whose shoulder was dislocated by police officers in June 2020 after she forgot to pay for $13.88 worth of items at Walmart, has agreed to settle her claim against the City of Loveland for $3 million.

In announcing the settlement during a Wednesday press conference, Garner’s attorney, Sarah Schielke, also pledged to personally donate $50,000 for the ouster of Loveland’s chief of police, Robert Ticer, who Schielke said helped engender an “echo chamber of approval” for “the horrors” perpetrated against private citizens at the hands of police.

“The only way it’s going to stop is to change the culture. The only way to change this culture is to replace the leadership—we have to get rid of the people who created it,” Schielke said. “As we’ve seen in the past few months, that type of broader accountability and reform is quite elusive in this city, and this is because the toxic leadership continues to let down and embarrass this city is deeply entrenched; it is devastatingly stubborn.”

Garner’s June 2020 arrest, which left her with a fractured and dislocated shoulder, initially made national headlines after bodycam footage showed the arresting officers’ actions. The department again found themselves in the spotlight just days later when surveillance footage from inside the station appeared to show several officers watching footage of the arrest and fist-bumping after discussing the audible “pop” of Garner’s dislocated shoulder.

Two of the officers involved in Garner’s arrest—Austin Hopp and Daria Jalali—were later charged for their conduct. Hopp was charged with assault in the second degree causing serious bodily injury, while Jalali was charged with failure to report excessive use of force.

In a May 19 news conference, Chief Ticer said the department had only learned of what had occurred during Garner’s arrest “nearly eight months later,” and declared that he then took “swift action” to address the problem. But an internal police report released Tuesday by Schielke appeared to undermine that position.

According to the report, Loveland Assistant Chief of Police Ray Butler watched bodycam footage of the arrest after it happened and wrote that Hopp’s use of force against the elderly woman was “necessary, reasonable and within policy.”

In an early morning Wednesday press release, Ticer said the department was taking the steps needed to build back trust.

“There is no excuse, under any circumstances, for what happened to Ms. Garner. We have agreed on steps we need to take to begin building back trust,” he said. “While these actions won’t change what Ms. Garner experienced, they will serve to improve this police department and hopefully restore faith that the LPD exists to serve those who live in and visit Loveland.”

Schielke responded on Wednesday by saying that Ticer should resign or be fired.

“In order for this community to actually heal—in order for these kinds of incidents to stop happening—they have to go,” she said. “Chief Ticer, Loveland, I’m going to put my money where your mouth is. My announcement is this—if Chief Ticer resigns or is fired in the next 30 days, I will donate $50,000 of my own money to any dementia or Alzheimer’s charity of his choice.”

Schielke is currently suing Loveland Police on behalf of another family due to a June 2019 shooting that left a 14-month-old puppy dead. Bodycam video of the incident sparked outrage. Ticer is named as a defendant in the suit.