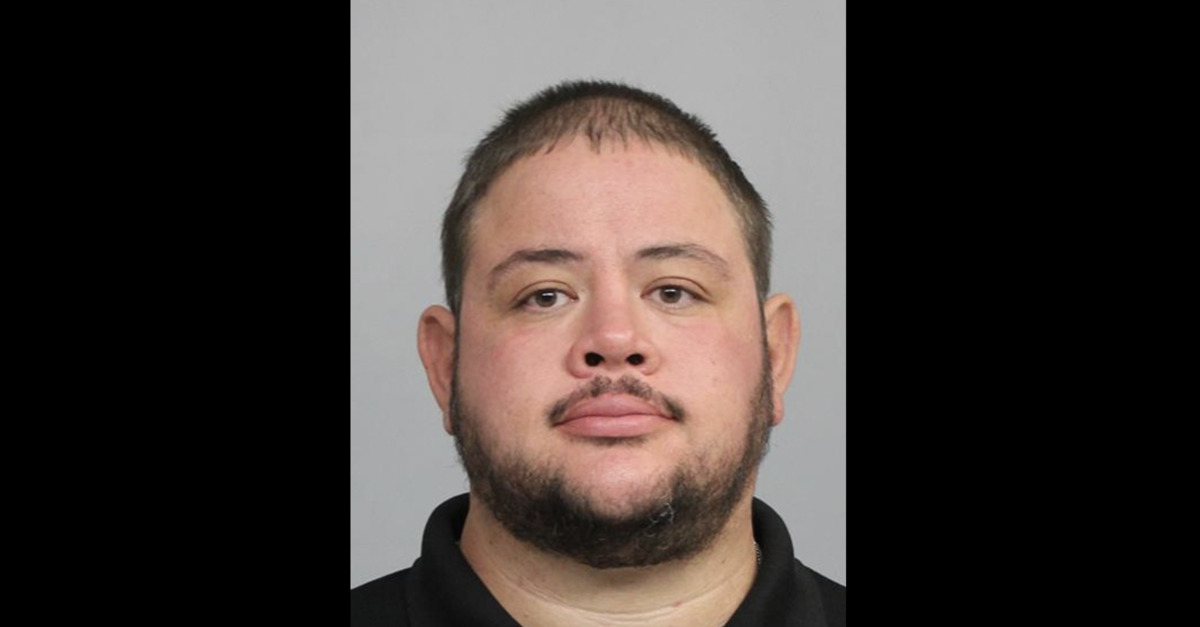 A Wyoming man accused of killing a friend and fellow Cowboy State resident in an “especially disturbing” fashion had his bail set at half a million dollars cash by a judge on Tuesday.

Justin Armando Marquez, 40, stands accused of murder in the second degree over the death of 36-year-old Ryan Schroeder.

The defendant was formally charged before Natrona County Circuit Court Judge H. Steven Brown during an initial appearance hearing in which the only points of contention were bond issues.

An Assistant Natrona County District Attorney called Schroeder’s murder “brutal and gruesome” and pleaded with the court for $1 million cash bail. In response, defense attorney Joshua Taylor noted that his client has no previous violent crimes on his record, that he owns property in the county, and that he has several family members who live in the community, according to Casper, Wyo.-based Oil City News.

Schroeder was reported missing by his family to the Casper Police Department on July 6. The victim’s mother told detectives she last heard from him on June 24 and that she was unable to find anyone else who had seen or spoken with her son since June 26. His two minor children also hadn’t heard from him in some time. According to police interviews, the consensus was that Schroeder was planning to travel to Denver, Colorado around the last time he was seen alive.

His body was discovered by a four-strong task force of investigators from local and county law enforcement agencies on Aug. 30. The decomposed corpse was identified as Schroeder’s the next day.

Officers with the Wyoming Division of Criminal Investigation and Natrona County Search and Rescue also helped with the search.

According to a probable cause affidavit obtained by local news radio station KTWO, there were at least 25 stab marks on Schroeder’s shirt near his upper chest and upper back regions. Multiple stab wounds had penetrated the victim’s rib and sternum.

Detectives allege that a review of Schroeder’s phone records showed that he and Marquez had called each other a combined 67 times since June. The last phone call Schroeder ever had, the affidavit claims, was with Marquez. The defendant allegedly told police that Schroeder texted him asking to hang out while he was in Denver but insisted those plans never came to fruition. Marquez also said that he hadn’t heard from the dead man since leaving Denver.

Other witnesses contradicted that–saying the pair “partied” together during the night of June 25 through the morning of June 26. One source allegedly told police Schroeder and Marquez were arguing with each other like “an old married couple” on the night in question.

After interviews, police obtained a search warrant for Marquez’s maroon 2007 Hyundai Santa Fe–which was being kept in a Casper storage facility at the time. Detectives claim to have come across a bloody scene inside the car. Tell-tale splashes of red were found on the driver’s side window, the front windshield, on and surrounding the front passenger seat, the driver’s seat and the car’s center console, police say. A bottle of window cleaner was also allegedly found inside the car with streaks still lingering on the passenger’s side window.

“The distinct smell of decomposition was noted inside the vehicle,” the affidavit alleged.

Lab tests subsequently determined with a high level of confidence that the blood in the vehicle belonged to Schroeder.

A separate vehicle registered to Marquez was then placed under electronic surveillance, the affidavit says, and eventually made “significant” stop at a “specific coordinate” during a loop of multiple highways and roads in the area. That stop, police claim, led to a large-scale search of the Coal Mountain Road area where a bloody towel was discovered. The towel allegedly reeked of decomposition. Police say the towel immediately led to the discovery of Schroder’s body and sunglasses as well as a burn barrel containing a 5XL blue polo shirt, a wooden dowel, a tan piece of fabric, leather belt remnants, drawstrings from a garbage bag and a Walmart receipt.

Marquez was taken into custody on Sept. 3. 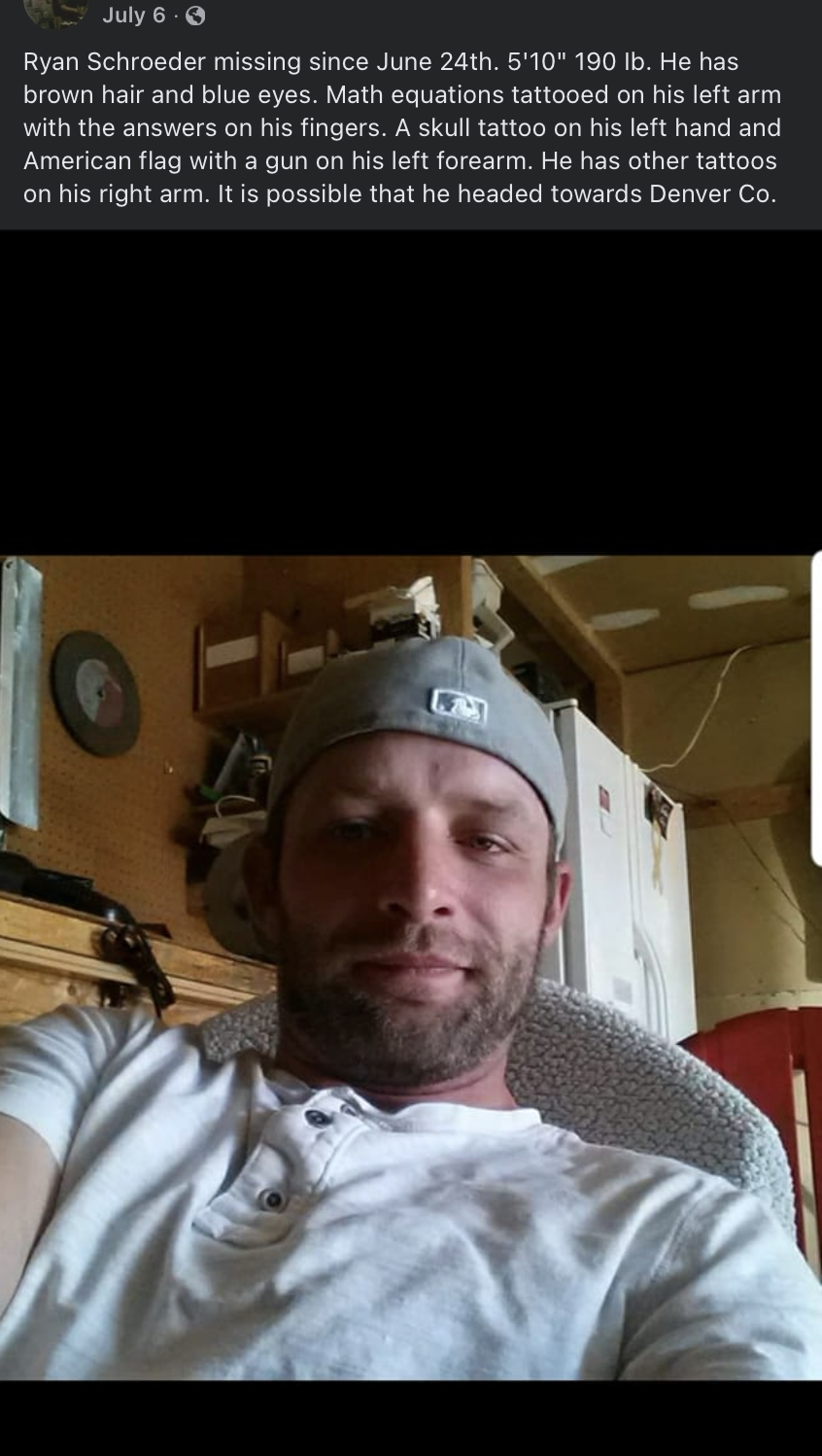 An obituary for Schroeder described the victim in detail:

Ryan Mitchell Schroeder was tragically taken from this Earth far too early in life at the age of 36.

He was born and raised in Casper, WY to Brian and Kerri Schroeder on September 15, 1984.

Ryan loved sports. He grew up playing baseball and even spent a few years coaching the game. His enjoyment for the game continued into his adult life as he participated in softball leagues every summer. He was an avid football fan, with a special place in his heart for the Denver Broncos.

He also enjoyed the outdoors and spent countless hours fishing, hunting, and camping.

He was such an inquisitive person who loved to read, write, and learn. He was constantly trying to educate himself on various subjects. In the last few years, his thirst for knowledge grew stronger to the point that he spent much of his time searching for a deeper understanding of the universe and studying the word of God.

Ryan was a very talented drywall finisher. He took drywall to the next level with his artistic design. Many commercial businesses and residential homes are graced by Ryan’s work.