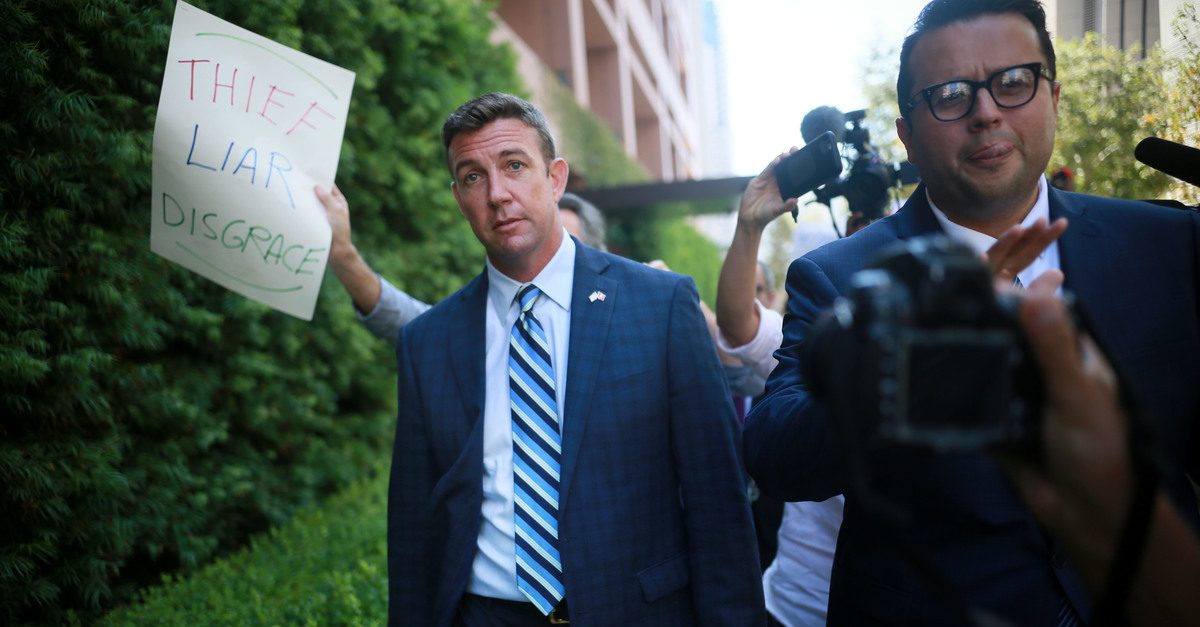 Disgraced former GOP representative Duncan Hunter submitted court documents on Tuesday claiming that the criminal indictment against him should be dismissed because two of the U.S. Attorneys who prosecuted his case displayed a clear conflict of interest by attending a fundraiser for then-presidential candidate Hillary Clinton in 2015.

Hunter, who pleaded guilty to one count of misusing campaign funds in December, submitted the motion to dismiss in advance of his March 17 sentencing hearing; he faces a maximum of five years in prison and a fine of up to $250,000.

Hunter’s defense lawyers argued that the prosecutors were required to recuse themselves from his case because their attendance at the fundraiser constituted a conflict of interest and appearance of a loss of impartiality in accordance with the U.S. Attorney’s Manual.

“Here, the former Acting US Attorney for the Southern District of California and the Assistant US Attorney leading the investigation of Congressman Hunter both attended a political fundraiser for candidate Clinton and shortly thereafter both were involved in initiating an investigation of the first Congressman to endorse candidate Trump,” Hunter’s attorneys wrote. “The Defendant argued those facts alone warranted recusal.”

While Hunter’s attorneys were previously been denied on a similar motion to have the prosecutors removed based on the perceived conflict of interest, his defense team renewed the motion Tuesday, insisting they had learned new information that further illustrated Hunter’s prosecution was politically tainted.

The latest motion was based on emails obtained by conservative activist group Judicial Watch through a Freedom of Information Act (FOIA) request. Hunter’s attorney said these emails “confirm that the AUSAs who attended the fundraiser were not there on official business” and “disprove the Government’s claim that the AUSAs were at the fundraiser for a legitimate law enforcement purpose.”

In the emails, both prosecutors appeared to be expressing their thanks for being invited to the fundraiser.

“The Defense contends that the evasive way this fundraiser/bias issue has been handled by the Government reinforces the reliability of our claim,” the motion stated. “The accurate facts were avoided because they look like what they are; evidence of bias. Mr. Hunter’s charge of bias was met with widespread derision in the media. The Government fueled that public scorn with inaccurate denials. It is unlikely, human nature being what it is, that the prosecutors have shed their bias now that the truth has been revealed to the Court.”

The defense seeks a dismissal at best and a recusal at minimum.

Read below for the full filing: