Donald Trump and His Adult Children Will Spend Seven Hours Apiece in Depositions for a Suit Accusing Them of Promoting a Pyramid Scheme: Doc

Former President Donald Trump and three of his adult children will spend seven hours apiece facing deposition for a federal lawsuit accusing them of promoting a pyramid scheme, a new court filing indicates.

“Plaintiffs provided to Defendants the following list of witnesses that Plaintiffs intend to depose, with time estimates within the Court’s guidance with respect to a 105-hour limit,” the 3-page letter to the court says.

The full chart is below: 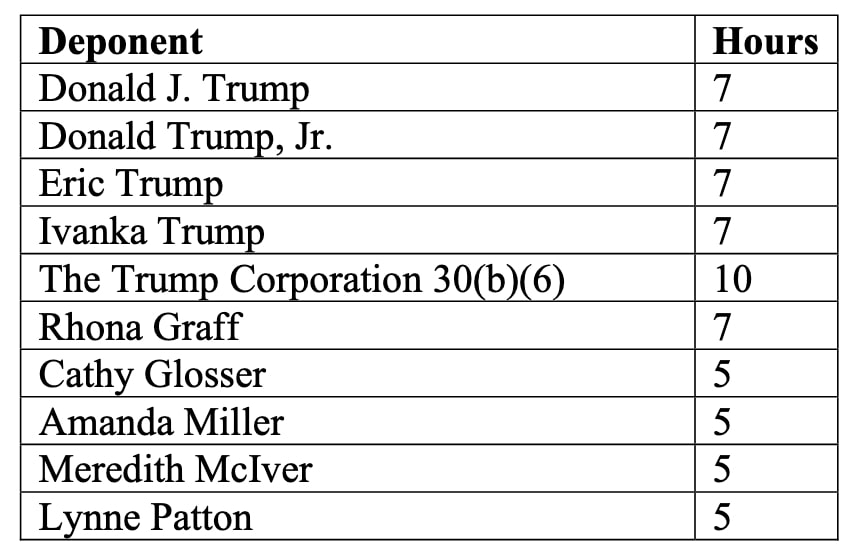 Initially filed anonymously in 2018, the lawsuit alleges that the Trump Corporation promoted a multi-level marketing scheme—better known as a pyramid scheme—through the company ACN Opportunity, LLC, which operates under the name American Communications Network. The four named plaintiffs, suing under a proposed class action, agreed to waive their anonymity last year in filing a second amended lawsuit.

According to the lawsuit, ACN was a “get-rich-quick scheme” that burnished Trump and his family’s names for the purposes of  “conn[ing] each of these victims into giving up hundreds or thousands of dollars” in alleged violation of various state laws. ACN had investors sign an arbitration agreement, but the Trumps did not.

The U.S. Court of Appeals Second Circuit denied the Trump family’s request to force the plaintiffs into arbitration, which likely would have resolved the matter secretly.

Instead, the case proceeded publicly in the Southern District of New York. The lawsuit there claims that the Trumps arranged for ACN to appear twice on The Celebrity Apprentice.

Though Friday’s letter doesn’t name any precise dates, the filing indicates that the depositions could take place soon.

“Defense counsel have confirmed that they will represent and produce all of the current and former Trump Organization employees, other than Ms. Hicks and Ms. Glosser, whom they expect, but have not yet confirmed, they will represent as well,” the letter states. “The parties have discussed the scheduling of these depositions and expect to take a significant number of them in June and July. The parties also have discussed a rough sequence, and have identified certain witnesses who can be deposed now and others whose depositions should be taken later, following production and receipt of certain additional documents and information. Defendants previously provided deposition dates for the witnesses, which dates have now lapsed, and expect to provide additional dates soon. The parties are optimistic that we will have a number of agreed-upon dates by the time of the conference scheduled for next week.”

The parties are expected to return to court next week.

“We look forward to the conference scheduled for June 8, and are continuing to work collaboratively so that we can report concrete progress on all of these issues by that time,” the letter states.

It is signed by multiple attorneys for both parties, including Roberta Kaplan for the plaintiffs and Trump’s lawyer Alina Habba.

(Image via TIMOTHY A. CLARY/AFP via Getty Images)