Proud Boy Who Nearly Came Face to Face with Chuck Schumer Inside the Capitol on Jan. 6 Pleads Guilty to a Felony 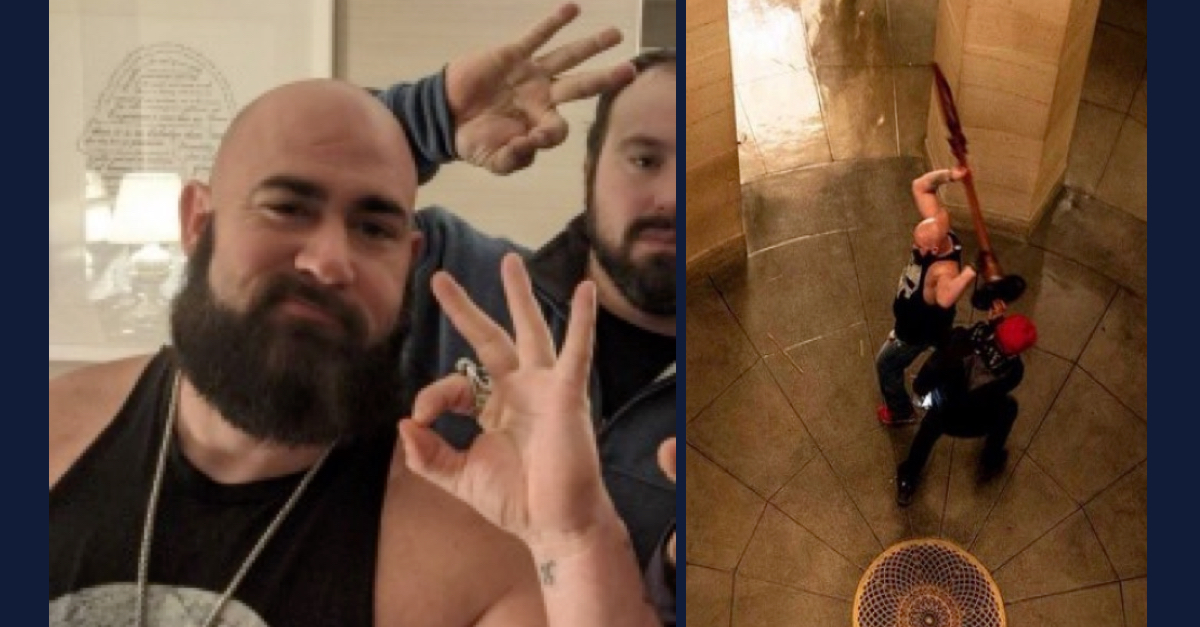 A member of the Proud Boys extremist group who apparently almost came face to face with Sen. Chuck Schumer (D-N.Y.) during the Jan. 6 attack on the U.S. Capitol has pleaded guilty to a felony.

Joshua Pruitt, 40, was one of the thousands of Donald Trump supporters who marched to the Capitol after attending the former president’s so-called “Stop the Steal” rally, which he attended with fellow members of the Proud Boys. He had originally been arrested on Jan. 6 for refusing to abide by District of Columbia Mayor Muriel Bowser‘s curfew order that evening; it was only while Pruitt was being processed that investigators tied him to the Jan. 6 mob.

While wearing what the government describes as a “tactical glove with knuckle pads,” Pruitt followed a group of rioters that had pushed through a line of law enforcement officers and advanced up the stairs to the Upper West Terrace of the building. He entered the building at around 2:14 p.m., around the time of the initial breach of the building.

Pruitt was captured on video “violently” throwing a wooden “Quiet Please” sign as he made his way toward the Capitol Crypt. Once there, prosecutors say, he was “at the front of a group of rioters that eventually overwhelmed the police line.”

According to the Statement of Offense, which sets out the facts Pruitt acknowledges to be true, he followed officers as they retreated from the Crypt, having been overwhelmed by the crowd. After descending a staircase to the Capitol Visitor’s Center, Pruitt “picked up a chair near the bottom of the staircase and tossed it in the direction that officers had retreated.”

Pruitt and another rioter continued northbound through the Capitol Visitor’s Center, in the direction of the Senate subway, the Statement of Offense says.

That’s when the close call with Sen. Schumer happened.

The Statement of Offense describes the close call in detail:

Meanwhile, then-Minority Leader Charles Schumer and his security detail had evacuated from the Senate Chamber and were attempting to reach their motorcade in an effort to move Senator Schumer to a secure location. Senator Schumer and his security detail walked up a ramp toward the elevators in the northern part of the Capitol Visitor’s Center. They waited by the elevators.

At that point, the Statement of Offense says, Pruitt turned around and went south through the Capitol Visitor’s Center, toward a set of double doors that officers were guarding. He eventually left the building at around 2:51 p.m. by climbing through a window.

Prior court filings in Pruitt’s case had not included the details about the close call with Schumer.

Representatives for Schumer did not immediately respond to Law&Crime’s request for comment.

Pruitt pleaded guilty Friday to a single felony charge of obstruction of an official proceeding, which carries a potential 20-year prison sentence and a fine of up to $250,000.

The plea agreement anticipates a sentence of between 51 and 63 months in prison, considering Pruitt’s criminal history, which includes a restraining order violation, harassment, and multiple DUIs in three separate states, and a fine between $15,000 and $150,000. The court is not bound by those estimates.

Pruitt’s agreement also calls for him to cooperate with the DOJ’s sprawling investigation into the attack by participating in one interview with FBI agents prior to sentencing.

He is to be sentenced on Aug. 26, 2022. He faces a statutory maximum of 20 years in prison and a fine of up to $250,000. A federal district court judge will determine any sentence after considering the U.S. Sentencing Guidelines and other statutory factors.

Pruitt’s trial was set to start in July. He had been under the federal government’s High-Intensity Supervision Program (HISP) since his arrest on Jan. 7, 2021, but in January of this year, U.S. District Judge Timothy Kelly, a Trump appointee, had ordered Pruitt back into custody, finding that he had violated the terms of his pretrial release multiple times.

Pruitt’s sentencing was set for Aug. 26. At that time, the remaining charges—which include civil disorder, destruction of government property, and a handful of trespassing and disorderly conduct misdemeanors—will be dismissed.