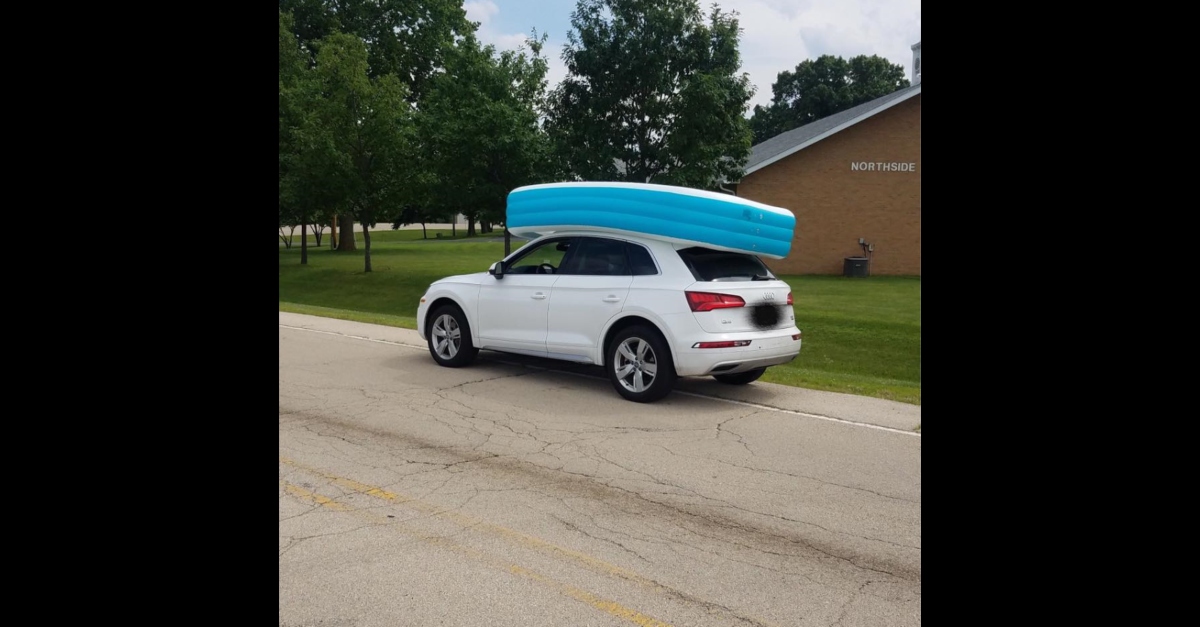 A mother in Dixon, Illinois was arrested Tuesday after she allegedly had her two daughters sit in an inflatable pool on her car’s roof. Jennifer A. Janus Yeager, 49, was using them to anchor down the pool while she drove from a friend’s home, where she had inflated it, according to the local police department.

Cops got a call from a witness about an Audi passenger car. It featured the aforementioned pool with the children on top, authorities said. Police searched the area, found the vehicle, and conducted a traffic stop.

Here’s how officers described the alleged motive behind the scenario:

​During the course of the investigation it was learned that Yeager drove into town to inflate the pool at a friends’ house and had her two juvenile daughters ride inside of the empty pool to hold it down on their drive home.

Yeager faces two counts of endangering the heath or life of a child, and two counts of reckless conduct. Cops also cited her for failure to secure a passenger of the age of 8 and under the age of 16. Clearly, her daughters allegedly weren’t wearing seat belts.

Police say 49 year-old Jennifer Yeager from Dixon #Illinois was arrested for driving with her 8 and 16 year-old daughters in an inflatable pool on the roof….telling police she drove to a friend’s house to inflate the pool & the girls were in it to hold it down on the drive back pic.twitter.com/EqOlRhBkEJ

Lee County records don’t name a defense lawyer. Yeager was processed at the Dixon Police Department, and was released after putting up bond, cops said.