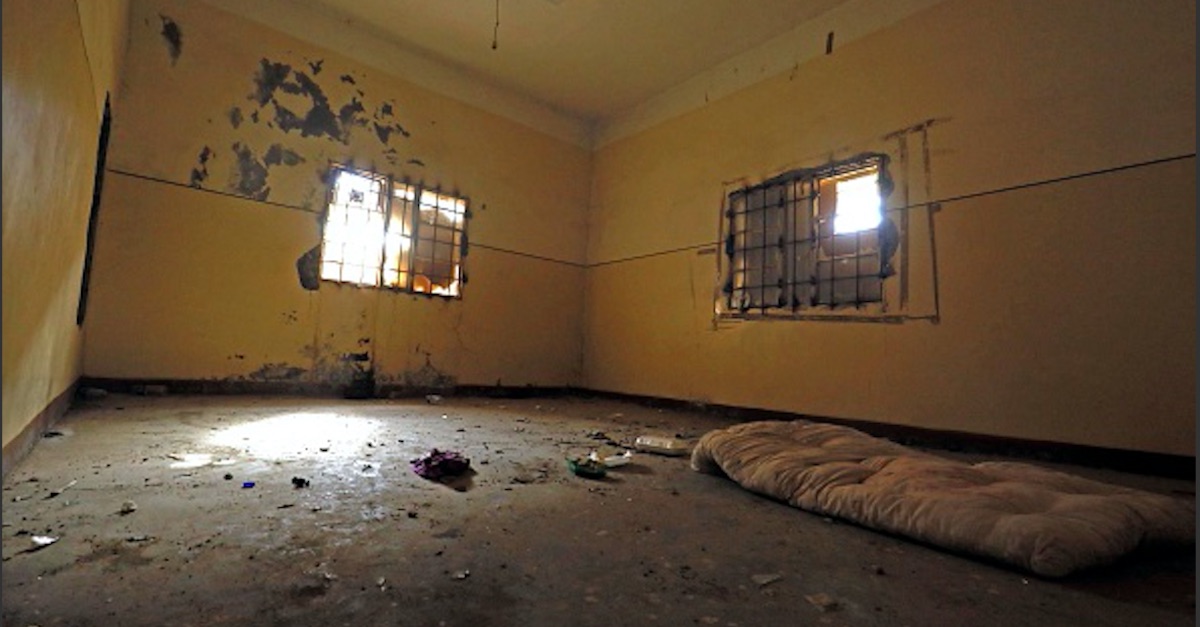 The cell pictured above is not the cell where Taylor was housed.

A federal appeals court on Friday affirmed a lower court’s ruling in favor of several prison guards who forced an inmate to sleep naked on the floor of a prison cell that was covered in human waste and raw sewage, reasoning that the conditions did not violate the inmate’s “clearly established” Eight Amendment rights.

In the lawsuit, Texas inmate Trent Taylor alleged that  prison officials at the John T. Montford Unit of the Texas Department of Criminal Justice (Montford) violated his Eight Amendment rights by forcing him to live for nearly a week in utterly squalid conditions.

According to the complaint, which the officials did not dispute, in September of 2013, Taylor was stripped naked and forced to stay in a cell where “almost the entire surface—including the floor, ceiling, window, walls, and water faucet was covered with ‘massive amounts’ of feces.”

He said that he couldn’t eat in the cell, because he feared contamination and couldn’t drink any water because feces were “packed inside the water faucet.”

Taylor was brought to the cell on Sept. 6 and remained there until Sept.10.

On Sept. 11, Taylor was moved to a “seclusion cell” that didn’t have a toilet, water fountain, or bed, but did have a drain in the floor where he was told to urinate.

Taylor alleged that the floor drain was clogged, leaving raw sewage on the floor. The drain smelled strongly of ammonia, which made it hard for Taylor to breathe. Yet, he alleged, the defendants repeatedly told him that if he needed to urinate, he had to do so in the clogged drain instead of being escorted to the restroom. Taylor refused.

He worried that, because the drain was clogged, his urine would spill onto the already-soiled floor, where he had to sleep because he lacked a bed. So, he held his urine for twenty-four hours before involuntarily urinating on himself. He stayed in the seclusion cell until September 13. Prison officials then tried to return him to his first, feces- covered cell, but he objected and was permitted to stay in a different cell.

Under the doctrine of qualified immunity, government officials are shielded from civil liability for any conduct that does not violate a person’s “clearly established” constitutional rights. But in order for that right to be clearly established, the particular conduct of the alleged violator must have previously established to such an extent as to “placed the statutory or constitutional question beyond debate.”

The Fifth Circuit Court of Appeals granted summary judgment for the guards, finding that while Taylor’s Eight Amendment rights were violated, the guards were entitled to qualified immunity because the guards didn’t have “fair warning” that “their specific actions were unconstitutional.”

“The law wasn’t clearly established,” the Court ruled, basing their decision on the length of time permissible to submit a prisoner to such conditions. “Taylor stayed in his extremely dirty cells for only six days. Though the law was clear that prisoners couldn’t be housed in cells teeming with human waste for months on end, we hadn’t previously held that a time period so short violated the Constitution. That dooms Taylor’s claim.”

The Court was also sure to include that slightly fewer extreme conditions than those Taylor was forced to endure could very well be considered constitutional.

“We do not suggest hold that prison officials cannot require inmates to sleep naked on the floor,” the Court wrote. “There can be any number of perfectly valid reasons for doing so. Our holding is limited to the extraordinary facts of this case, in which Taylor alleges that the floor on which he slept naked was covered in his and others’ human excrement.”